Our Nashville-based friends Brooke and Tory came to town for Dragon*Con, and we had our usual Sunday night get-together with them during all that madness. I have to thank the convention for never scheduling anything unmissable on Sunday evenings, although this year, a special screening of an episode of Torchwood, with commentary by one of the actors, did mean we got together slightly later than I would have hoped.

I picked them up at the hotel while Marie and the children went ahead to Osteria del Figo on Howell Mill. I figured that we’d ask our guests what sort of food they were in the mood for and have a nearby restaurant already selected to breeze them there. I’m pretty sure I had every reasonable possibility other than pasta covered. If it wasn’t just down the street from our own house, twenty miles north of downtown, we’d probably have gone to Frankie’s, but I was momentarily stumped about a good, inexpensive Italian place near the convention hotels. A quick little look over Urbanspoon suggested this would be a good choice, and it really was. 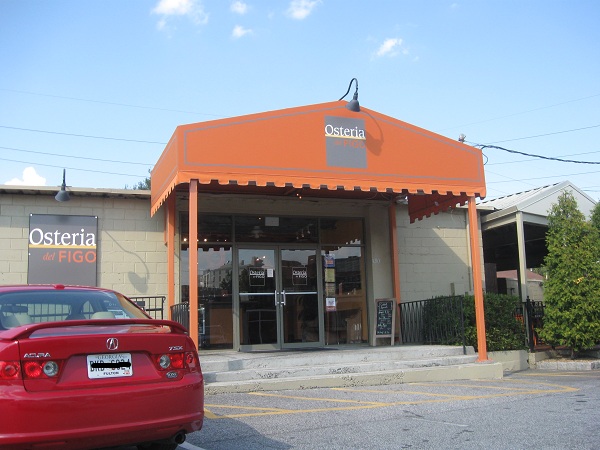 The restaurant is easy to find; it is on the corner of Howell Mill and Huff, and it appears to have ample parking, which is kind of a rarity in this neighborhood. There’s a too-small airlock area, where guests line up to place their orders with a cashier. This part is a little slow, owing to a dense menu utterly full of possibilities. There are a good number of house specials, but also similar “build your own pasta” creations like you see at some of the larger national chains, with 18 sauces over 25 noodle selections. Speaking of which, there are currently seven Figo locations in Atlanta, but they don’t appear to have expanded to other cities. Most of the combinations here start at $8, and you can add meats for various prices. Figo prides itself on its meatballs, offered in a variety of recipes, for $1.50 each. This is a good place to get quite a lot of food for a reasonable price.

It looks like you can make some really fun meals up here. I went with spinach ravioli with amatriciana sauce, which is a red sauce with pancetta, tomatoes, peppers and olive oil. It was terrific. Marie had primavera over linguine and our daughter had pesto sauce over penne noodles. I am keen to visit again for lunch one day and give the artichoke ravioli with four cheese sauce a try. First Bite had that when she visited a couple of years ago and it looks very tasty.

As we waited for our food, we talked about visiting Nashville in a couple of months. This has been pretty much the longest I have gone without a trip to Nashville in a decade, and frankly, I miss the place, but this has been something of a ridiculous and crazy and busy year. So I tossed out a skeleton of a plan of what I’d like to do when we get there, and one or two places that I’d like to visit or revisit. Naming all these wonderful restaurants and wonderful meals had me quite hungry for my ravioli!

Well, after we had talked about Prince’s and Rotier’s and Ellington Place and Mas Tacos and Pied Piper and other such yummy places, and let the baby get lots of love and cuddling and attention, we enjoyed a really good meal. The food here is simply splendid, and we all enjoyed sampling each others’ dishes. Pasta really was a fine idea of Brooke’s, honestly. I’m very glad that we tried this place.

After we ate, the baby let us know that he really was in the mood to go home and be nursed and go to bed, so my daughter and I drove the ladies back to their hotel, but not before stopping at Flip Burger Boutique for a milkshake. I was sorry that Marie missed out, but Flip, incredibly noisy and ridiculous, isn’t baby-friendly at all. Unfortunately, they were out of the requested Cap’n Crunch shakes, but we enjoyed the Peach Melba and Krispy Kreme and Strawberry Shortcake and the remarkably curious Burnt Marshmellow with Nutella. (“It tastes like camping,” Tory exclaimed.) Everybody visiting Atlanta should try one of these.

There was a really odd loop of music videos going on the bar here, including Radiohead and, of all things, “Primary” by the Cure, which still strikes me as very odd to see anywhere other than the old Staring at the Sea VHS. My daughter is currently totally in love with the lead singer of My Chemical Romance. I pointed out the Cure, told her, truly, that MCR pilfered every idea it’s ever had from the Cure and, back before he ate all the pies, 1981-model Robert Smith was an awfully good-looking fellow. She disagreed with emphasis. Then I pointed out the bassist, Simon Gallup, and told my daughter that the girl I took to the prom was more totally in love with him in 1988 than she is with Gerard Way, today. She had to pause on that point. I never got much in the way of follow-up.

(Update, 11/12/11): As I promised myself weeks ago, I tried that artichoke ravioli with four cheese sauce. Marie and I went with our daughter and Neal to the Figo in Vinings and gave it a try. 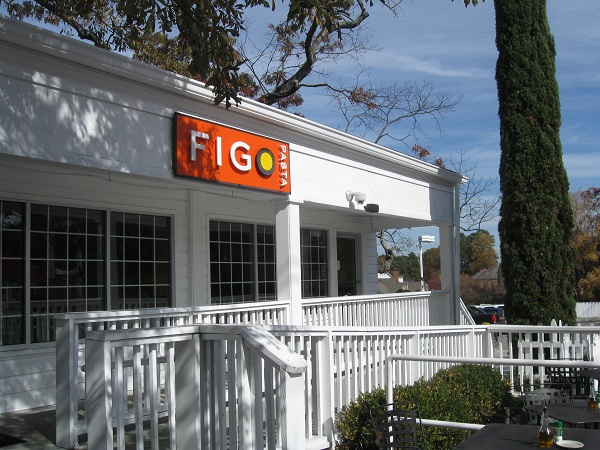 It was every bit as tasty as I had hoped. My daughter had the paprika penne with arriabiatta sauce and was also very pleased with it.