So how many Brazilian restaurants do you imagine you’d find within eyesight of the Micro Center on Powers Ferry in Cobb County? At least three. “Four,” said my daughter. “Oh, wait, never mind, that says ‘Brazilian Wax’.” Naturally, we went to the wrong one first. The wrong restaurant, not the wax place.

Back on Labor Day weekend, Marie was down at Dragon*Con, gaming with her brother and sister, while I stayed home to watch the children. David suggested that we meet for supper at the Brazilian restaurant across from Micro Center, and I thought he meant Botemkin, the popular bistro on Terrell Mill that opened in late July to some praise and hype. This has never happened before, and I darn well hope it will never happen again, but the three of us twiddled our thumbs and drank water waiting for him – I’ve mentioned before that David’s manners are impeccable, and he’s not the sort to be late without phoning – until I got impatient and called him. Well, my daughter and I twiddled our thumbs; the baby just cooed and gurgled. No, of course, David was waiting for us over on Delk Road at Sabor do Brazil, a much less expensive buffet place. Sheepishly, we apologized to the servers and withdrew.

Sabor do Brazil is a tiny little restaurant with a small dinner buffet, nicely priced at $8.99 on weekends. Honestly, the food was not at all bad, but pretty uninspiring. I had a large salad earlier that day for lunch, so I just started with a small plate with some tomatoes, black beans and rice, a little skirt steak in gravy, some fried bananas and baked flan. It was okay. Much more interesting was what I had to drink. They make their own cashew juice here, and that was very tasty. 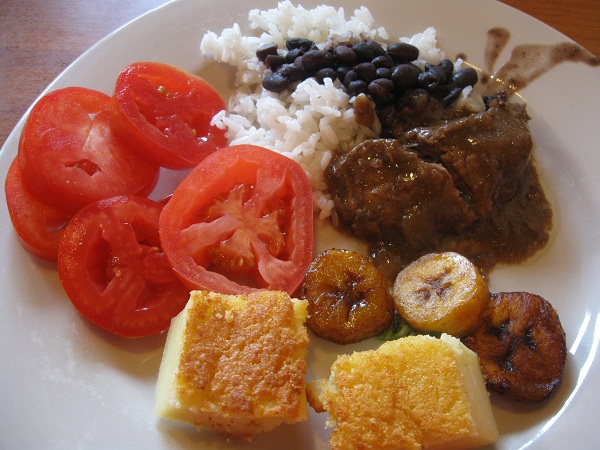 But honestly, I go to restaurants sometimes and just have an okay meal, and figure that there’s really no reason to write a blog post about it. Even as I planned to go back for a small helping of tilapia in a tomato sauce, I figured we are really behind enough between “meal” and “blog” that I can occasionally skip a writeup.

Then a young fellow came by the table and let us know that the barbecue was ready, if we wanted to come get some. Everything changed.

Now, it is a rare day when I must flat out contradict what any of my peers in this hobby state on their blog, but I’m afraid that Malika Harricharan of Atlanta Restaurant Blog is quite mistaken to claim that this place doesn’t serve the skewers of meat roasting in an oven that you typically find at Brazilian steakhouses. Perhaps they don’t offer this at lunch, when she stopped by, but they certainly do at dinner. By my definition, this clearly is not barbecue, as the young server described it, but holy anna, is it ever terrific. 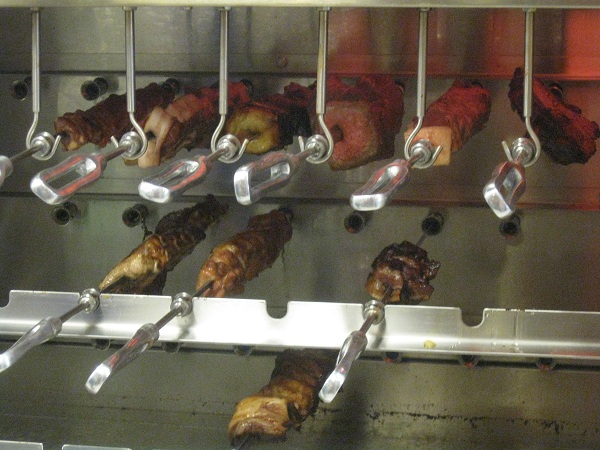 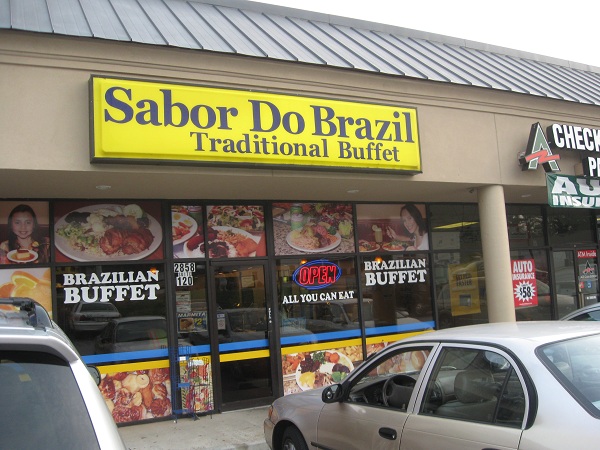 Well, most of it is. They have a number of meats roasting here, and I was not really taken with the pork ribs, which were too fatty. The beef with bacon was tremendously good, and the sausage was remarkable. Best of all was the picanha, which is top sirloin. They set the skewer upright on a plate and slice it downwards, with guests using tongs to help pull the meat away. It was tremendously good food, and I overindulged with great pleasure. David and my daughter each called it a day long before me, although in David’s defense, not knowing about this “barbecue” option – it’s just an extra dollar for the meat, a remarkable steal of a deal – he had loaded his plate with the buffet and didn’t have much room to dig in to the picanha.

Other than the young fellow who invited us to try the “barbecue,” we were served by the teenage daughter of the owner. I asked how long the restaurant had been here, and she said just about ten years. Not knowing who she was, I asked, as I do, how long she had worked here. “Oh, since it opened,” she replied. When I raised an eyebrow and asked, “Really?”, she got adorably flustered and told me, “I’m the daughter’s owner, I mean, I’m the owner of the daughter, I mean, I’m the owner’s daughter,” and that she was busing tables when she was seven.

She told me about the cashew juice, which is called simply caju in Brazil. I had no idea that the nuts that we eat are just a kernel of a much larger fruit that, in South America anyway, is used in its entirety. The fruit is eaten as a dessert or used in cooking, or the caju is extracted for a beverage. According to Wikipedia, in India, this juice, fermented, is used as the basis of an alcoholic drink called, depending on the process, either feni or gongo. Learning new things about food, and not just the stories behind restaurants, is one of the best things about writing this blog and talking to businesses. Now, I wonder where I can get a glass of feni, and how hard it’ll kick me onto my backside.

One thought on “Sabor do Brazil, Marietta GA”