Marie had been reminding her father that he was overdue for a visit. Up in Memphis, her sister had moved into a new apartment. Their father decided to take a road trip, incorporating their brother in Starkville and see all three of his kids, and he had an additional reason to come to Atlanta. He already knows several languages, and he’s recently decided to add Portuguese to his lexicon. Saint Simons Island, where he lives, has lots to recommend it, but it seems to lack many native speakers. Atlanta, on the other hand, not only do we have the Brazilian Consulate General, we’ve also got more than a dozen Brazilian restaurants. That makes for plenty of opportunities for my father-in-law to practice his Portuguese.

So one Tuesday last month, he came to town to visit the Brazilian government offices and get information about possibly getting a visa and seeing their country, and then he came to Marietta, where we have a quite neat little neighborhood around Delk and Powers Ferry. Here, at least four Brazilian-owned eateries have cropped up. He had lunch at one and then stopped by Brazilian Bakery Cafe to bring some treats over to our house. We enjoyed them so much that on Wednesday, we were happy for him to take us to lunch here.

My hours have changed at work and I have a short day again. Conveniently for the visit, it’s Wednesday. Marie took the day off and they all went to a playground for the toddler to raise all kinds of ruckus. I got home and we piled into Marie’s car to have an early lunch. 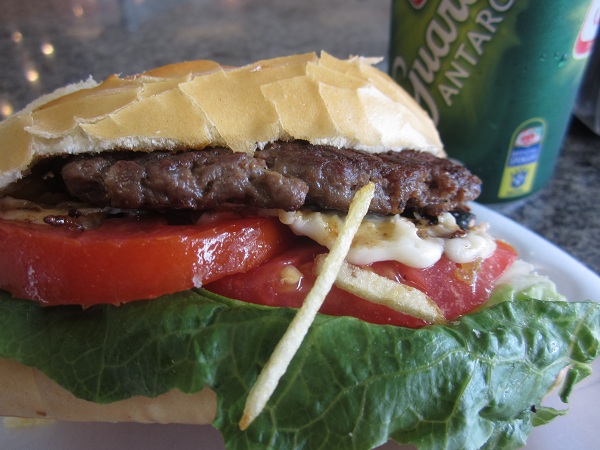 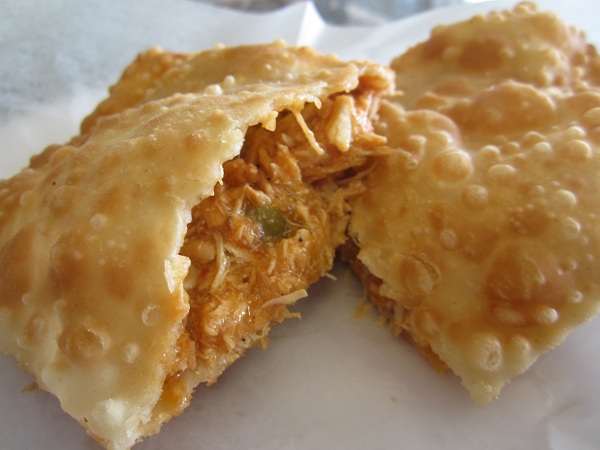 Two families opened Brazilian Bakery Cafe, Roberto and Rizete DeSouza, and Luis and Ligia Goncalves. Their specialty is an inexpensive filled pastry called a pasteis, but they do everything from hamburgers to cakes. The burger, served on really good freshly-baked bread, is an oddball concoction that includes ham and potato sticks.

I thought this was a very interesting meal in a relaxed and laid-back place. It recently expanded to take over the space next door, so there’s a very long counter full of cakes and pies and things, and plenty of room to enjoy breakfast, lunch, or supper. Plus, the two young ladies who served us were very happy to help Marie’s dad have some conversation in their native language.

We talked about supper plans and came up with a couple of ideas. I mentioned that we have at least four well-regarded steakhouses, including the best-known, and priciest, Fogo de Chão. We settled on the very good buffet at Sabor do Brazil, which the children and I visited in 2011. So around 5.30, we dropped the girlchild at church and drove over there. Upon learning that they don’t serve alcohol there, however, Marie’s dad, wanting a cocktail, said that we should go to that expensive steakhouse that I mentioned. Well, twist my arm. 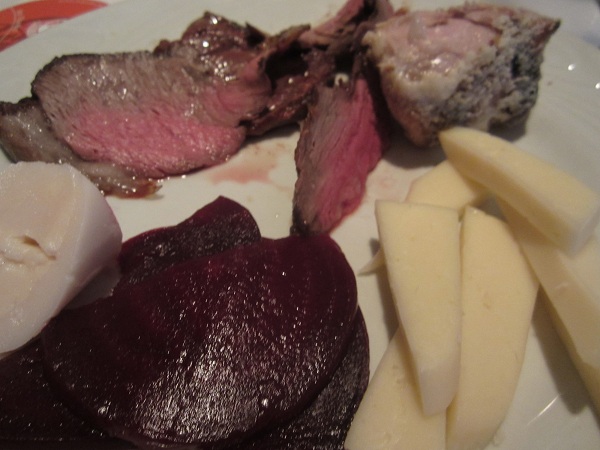 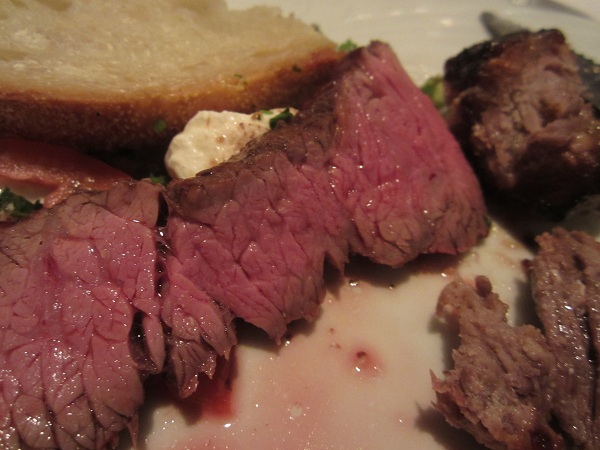 Fogo de Chão is a small chain with a couple of dozen locations in the US and Brazil. It’s not the sort of thing that can blanket the nation. It’s destination dining, fifty bucks a head before drinks. Now, when you consider the extremely high quality and the quantity of the food here, fifty dollars is about the fairest price in the world, but Atlanta has its one Fogo, and it’s considered the most popular restaurant in the city by a number of people and lists, and it has a reputation as one of the best places in town to go.

Expecting the mismatched tables and chairs of Sabor do Brazil, however, I felt conspicuously underdressed in a Mud Hens tee and ratty around-the-house shorts. Thank heaven for that guy in the dirty Yellow Jackets tee and even rattier shorts. I relaxed once I saw him.

The Fogo experience has been written up many, many times before and I’ll not repeat what so many others have said about the unbelievably good cheeses, vegetables – the beets were the standouts among many – and the meats – the garlic sirloin may have been my favorite but they were all great – but there was something singular about our experience. We came for my father-in-law to speak Portuguese, and despite a steady stream of servers changing out plates and gauchos cutting meat, very, very few of them could oblige his request. 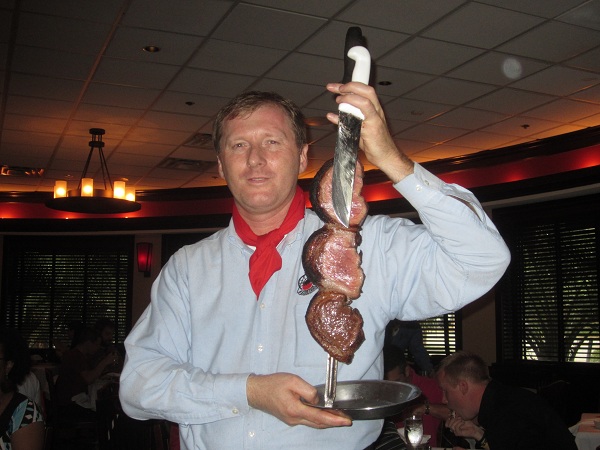 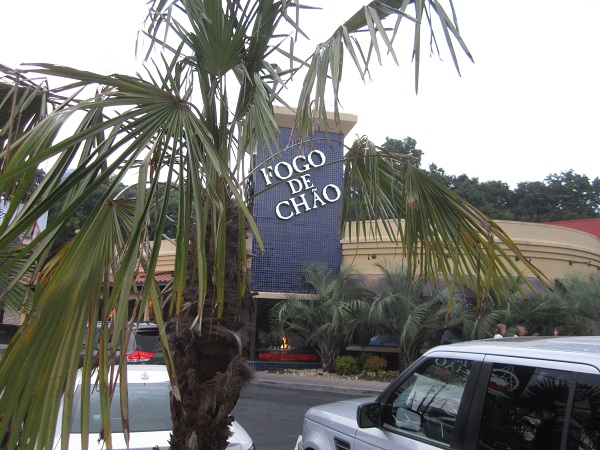 Oh, he got to say a few words in Portuguese, that’s for certain. Everybody understood “caipirinha” just fine, and they were happy to keep a steady chain of these sugary lime-and-rum cocktails coming to the table. But our servers were from Mexico, from Cuba, and from Turkey, and not a lot could be understood in the language of Brazil.

The Turkish fellow rolled a drinks cart around for an after-dinner sip of something. The cart was so large that a table of six could have all fit in it and been smuggled outside to skip on the check. My father-in-law suggested that he and I enjoy glasses of grappa, which is sort of moonshine made from grapes. The Turk insisted that, despite its reputation, Greece does not produce the best grappa, but northern Italy does.

I’d never had grappa before. About two weeks previously, my daughter and I were at the light in front of a restaurant in Marietta. I’d noticed that they have a sign advertising their new “smoked BBQ ribs,” and, true enough, there were two big, black smokers out front. Some kid was putting some wood into one of them. He had a gigantic container of lighter fluid. He sprayed and sprayed. The entire length of time I was sat at that light, my eyes growing in mute horror at what those ribs were going to end up tasting like, he sprayed and sprayed, squirted and squirted, emptying almost the entire container of lighter fluid onto that wet, wet wood. I was fifteen yards away and afraid to light a match.

He didn’t completely empty that container, I think. I bet he mailed what was left to northern Italy, where they’re bottling it as grappa and shipping it to Fogo de Chão. It was an amazing meal in every possible respect and we really enjoyed it to the full… but that’s not an after-dinner drink that I’m in a hurry to try again!