Marie and I were invited to stop by the latest location of Uncle Maddio’s Pizza Joint, a chain based in Atlanta that is rapidly growing through the southeast. The East Cobb Uncle Maddio’s location is the second unit for franchisees John Dayton and David Tracht, who also own and operate another store in Woodstock, which was the first franchised location in the company.

We were late. Man alive, were we ever late. See, there’s two totally separate roads in the region called Roswell Road, and somebody didn’t notice the bit on the invitation that said “East Cobb” and “Marietta.” Just saying.

Anyway, once we were both in East Cobb at the same time, we got in and had a look at the place. It has the feel of one of the old Raving Brands stores – remember dem? – and indeed, the business’s founder, Matt Andrew, co-created the omnipresent Moe’s Southwestern Grill, and steered it in its earliest days with Raving. It’s a very similar experience, with a staff trained to loudly greet everybody who enters, and a line up to a counter where guests can either order one of several specialty pies or customize their own. It is a very similar concept to Your Pie, a pizza place that was founded in Athens by a former Raving Brands man, Drew French, in April 2008. Matt Andrew’s Uncle Maddio’s concept launched the same year in Atlanta. After five years, Uncle Maddio’s # 18 has now opened, and his press releases trumpet his plans for – get this – 170 more stores in development before the end of 2014. At the time of writing, Your Pie also has eighteen stores in the southeast, but it sounds like they’re about to get left in the dust. 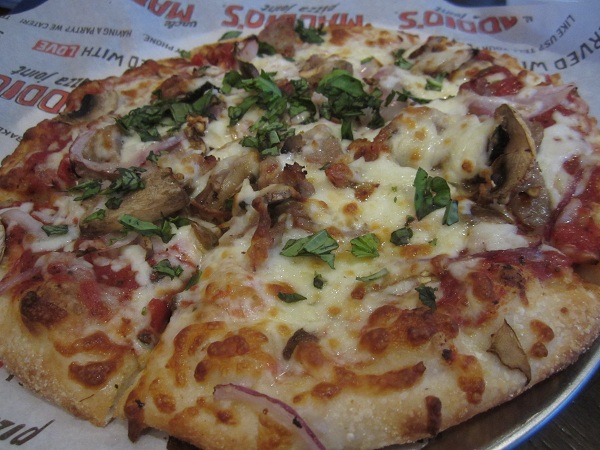 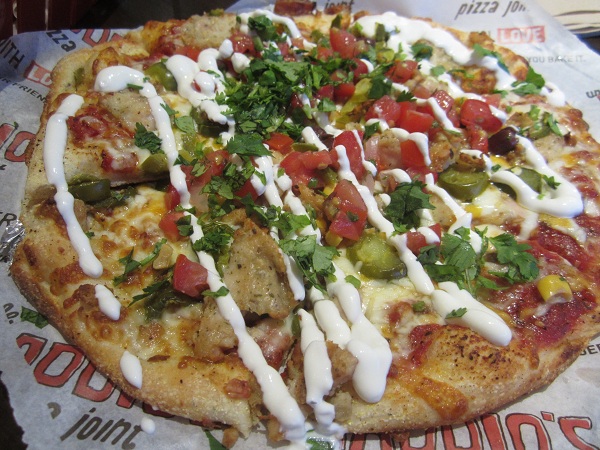 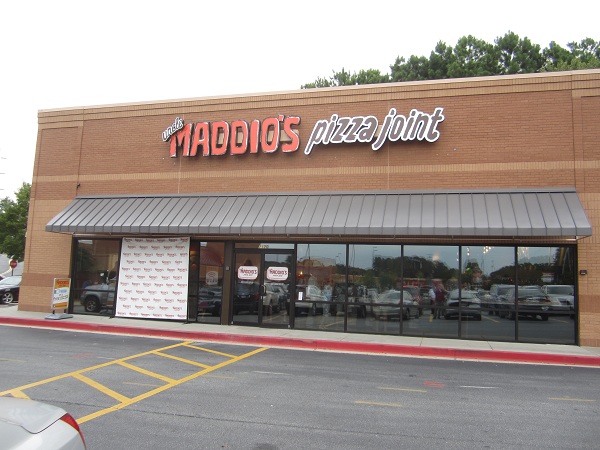 Marie selected the Spicy Italian pizza, which comes with tomato-basil sauce, mozzarella, spicy italian sausage, red onions, mushrooms, banana peppers and fresh basil. I went with the Southwest Baja, which has tomato-basil sauce, mozzarella and cheddar, grilled chicken, black bean corn salsa, jalapeños, cilantro and sour cream. They were both pretty good. The restaurant was being completely slammed with its balloons-n-kids grand opening celebration, and so I wouldn’t complain if they had made any mistakes with our food, but the staff was honestly working together quite effectively and the pies were very much what we expected, and good value for the price point.

We got to talk with David Tracht, co-owner of this franchise, as we ate. Mr. Tracht shared with us Uncle Maddio’s commitment to providing fresh vegetables and gluten-free offerings at all of its stores. Each of their sauces is prepared daily, and all of their twenty-five (!) vegetable choices come from suppliers in a very close radius to the stores. There is even a vegan cheese option, a brand called Daiya. The only disappointment I had was a selfish one. The company’s web site suggested that we’d find a Coca-Cola Freestyle machine here, and while waiting for Marie to arrive, I started thinking about a Fanta Lime… but this location sadly just has a standard eight-head fountain. Ah, well. Water’s better for me anyway.

Oh, wait, did that just give away who went to the wrong location? Well, shucks.

Other blog posts about Uncle Maddio’s: