Marie’s father came to town to visit his favorite grandson – and the rest of us, I suppose – and suggested that we go to a French restaurant for dinner. He’s quite pleased to live within walking distance of two dozen restaurants on Saint Simons Island, but you don’t get French cooking in south Georgia. We’re within walking distance – maybe – of a Captain D’s. Marie’s father is somewhat convinced that we live in the wrong place. He’s not the only one.

We made for the nearest French restaurant, Le Cafe Crepe in Marietta, only to find that they were taking the weekend off for a long vacation. So our options were to either pick one of the restaurants within walking distance of the downtown square – amusingly, there are probably also two dozen of them – or go find a French place inside the perimeter. Since we’d invited our friend David, who speaks a little French and with whom Marie’s dad wanted to have some conversation we weren’t party to – we chose to stay where we were and pick a new restaurant rather than inconvenience him David with the drive.

Kish opened earlier this year, offering a small menu of middle eastern cuisine, filling, in a small way, a hole in the community when Blu Taverna, the only Greek place in the immediate area, closed. The two restaurants are not much alike, and they do things very differently here. Blu was quite casual and Kish does a fine job of evoking 1930s elegance. The dining room is very large, but many of the tables can be moved out for dancing in the later evening. Kish periodically hosts live jazz bands, but on nights like this when they don’t have a group booked, they screen movies. The tail end of some black-and-white TCM-library film was playing when we arrived. The Fred Astaire film Royal Wedding followed, silently, while they played a greatest hits collection of Frank Sinatra standards. 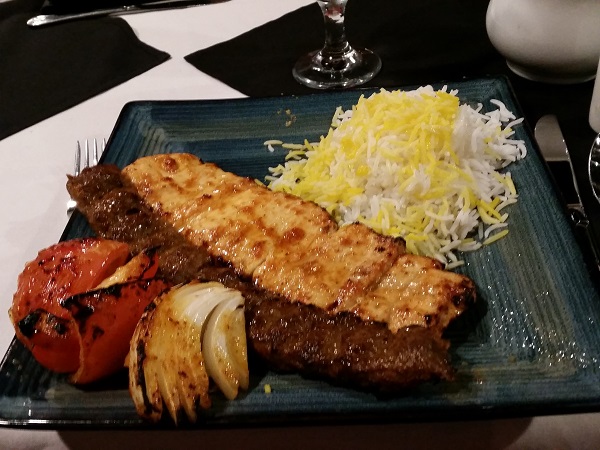 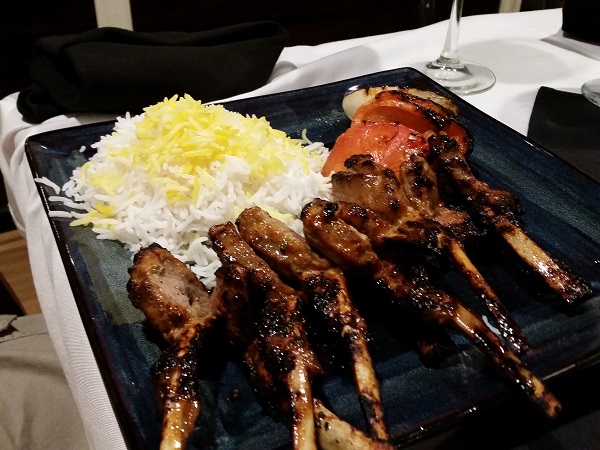 The menu here is a little funny. It’s a very thick menu with sixteen pages, but each page only has two or three dishes on it. I suppose that they bought the menus in from some other restaurant and printed up the individual pages to fit the size of the book.

Anyway, the house specialty is the Koobideh, a minced ground beef kebab. Many of the other entrees, like the marinated chicken, will also come with one Koobideh skewer along with rice and grilled vegetables. Everybody was very pleased with their meals, even Marie, who is usually not really taken with middle eastern or Mediterranean food. She’s never grumbled against it, like she has Indian cuisine, but it’s never really thrilled her, either. The very juicy and perfectly cooked meats, and very mild seasonings, appealed to everybody. Marie’s brother Karl, who had also come to town, very much enjoyed his lamb, and David shared a small plate of baby pickles that we all liked as well. 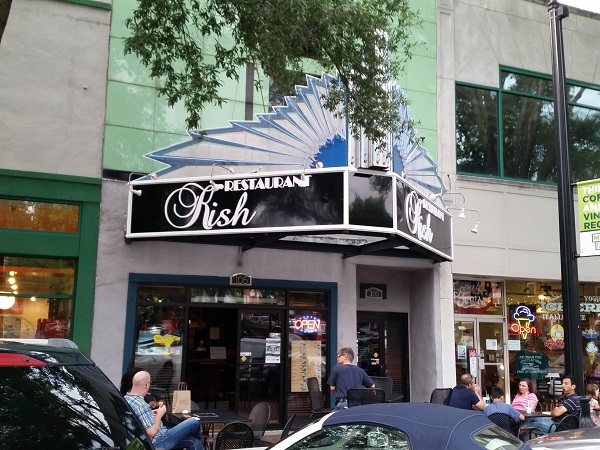 Unfortunately, there were very few other diners in the cavernous space. It’s a nice option for guests looking for a grown-up evening out, but so far it doesn’t look like many people are popping their heads in to see what the place was like. Preferring other places in the Atlanta area with similar offerings, like Kabob Land, I was not as impressed as the rest of my family, but I agree that everything tasted good and the service was impeccable, so hopefully the restaurant fills up a little better when a band is playing,

As a bonus, David and Marie’s dad got to speak a little French with one of the servers! He explained to us that the owners are from Iran and that the multiple different spellings of “Koobideh” throughout the menu, which caught our nitpickers’ eyes, probably came from different people translating the original Farsi. We asked whether he spoke Farsi, and he said that he was from Haiti and speaks French. So they carried on a conversation and had fun. And for those of you with long memories who remember that Marie’s dad also speaks Portuguese, he even got to say hellos with a Brazilian fellow in Kish’s nice lobby in that language.