No kidding, this is what happened. I saw a sign in Toccoa pointing me toward the town of Westminster and decided that would be the road that I would take. In a few minutes, I crossed the Tugaloo River into South Carolina and immediately U-turned – safely – and, as though I just remembered that this state elected a moron like Nikki Haley to be their governor, sped back into Georgia.

Alas, as much as I’d be happy to interrupt a narrative that’s ostensibly about food to make a cheap political gag, no, the real reason was because, crossing the river, I looked south and saw this beautiful, decommissioned old bridge just a short hop of a drive away, and just had to go take pictures and spend a few minutes walking around. I needed at least a short exercise break, and this bridge, which serves as a fishing pier and as an illicit late-night attraction for teenagers who come for miles when they aren’t meant to, was a perfect place to stretch my legs. On the Georgia side, there’s a short woodland trail along the river bank. The temperature was a calm 85, just perfect for a few minutes walking along the Tugaloo. 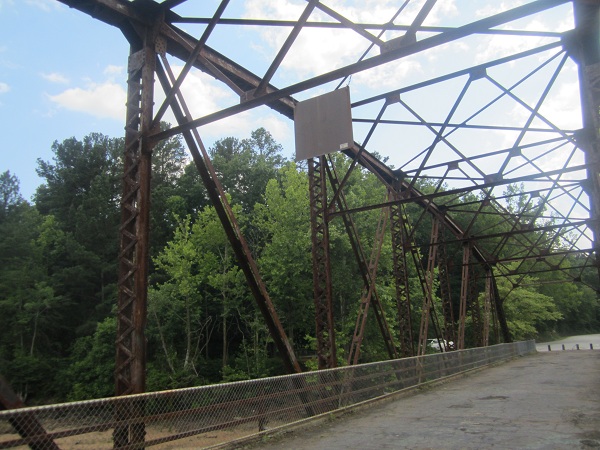 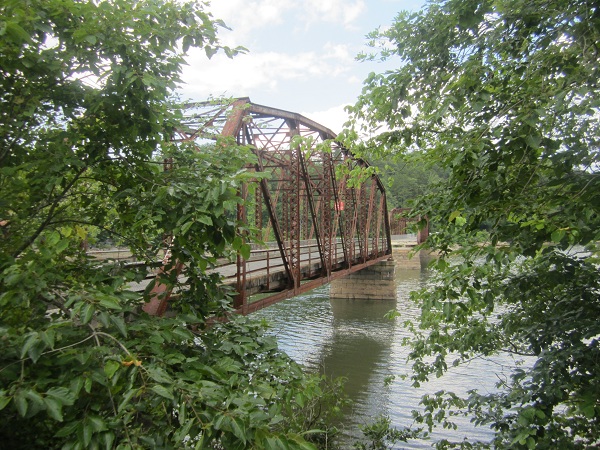 Then I remembered that I was standing in a state that elected a moron like Nathan Deal to be governor, and drove back to South Carolina.

A few minutes up the road, I did another U-turn around 4.30 in the afternoon as I passed by a place called the Hot Dog Depot in the town of Westminster. Here, I kicked back for a good 45 minutes shooting the breeze with the owner, Willie Jones. He’s 68 years old and ostensibly moved back home to this part of the state to retire, but, restless, decided to re-enter the business. Jones has worked in restaurants for almost his entire life, and told me stories about managing Arby’s and Shoney’s all around the southeast. The job that he was meant to have retired from was running a group of hot dog carts in and around Charlotte called New York Connection. 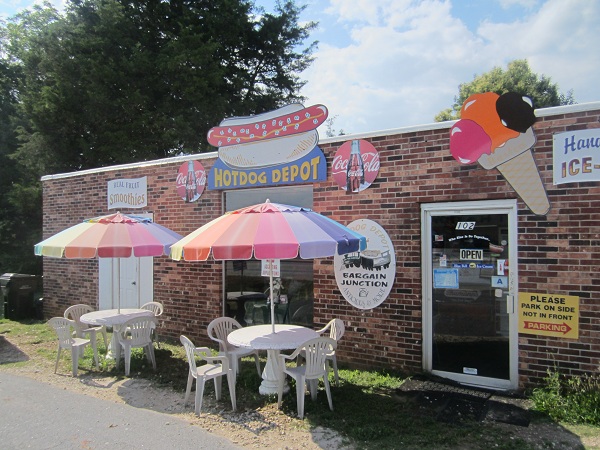 We talked a lot about the hot dog business and how he manages costs. One big obstacle selling these in the South Carolina upstate is that the market is dominated by a small chain called Skins. I believe that there are ten of these stores in and around Anderson and Greenville, including one about five miles up the road from Jones in Seneca. Marie and I visited one about two years ago; however, you’ll note, perhaps, that there is no corresponding chapter at this time. Anyway, the inference that I draw is that Skins is able to keep prices very low by ordering supplies and food in larger quantities to satisfy their larger customer base. Even though Jones has smaller overhead than Skins, the chain has effectively set the prices in the region lower than what he would have charged for dogs in Charlotte, meaning his profit margin is lower.

I was interested to learn that Jones orders his meat from three different companies, using different franks depending on the dog being assembled. My “Carolina” dog, with mustard and creamy mayo-slaw, was a Carolina Pride dog. He also orders in from Nathan’s and from a famous New Jersey supplier called Thumann’s for his Polishes and other sausages. They probably do as much, if not more business with ice cream, which is from Blue Bell.

The building is a beat-up and nondescript bit of easily-overlooked real estate. It’s a brick building that Jones believes was originally home to a beauty salon, but over time it has housed several businesses, including a used car lot. It’s across the street from an enormous sawmill and hardware store owned by a family named Thrift. Jones told me that they’re a very important and influential family; I noticed the name a little further up the road on some right-of-way signs asking for the public’s support for a city council seat, and supposed it’s probably somebody in the same family.

This was an absolutely wonderful little stop. It’s not going to net me many views on Urbanspoon – heck, I had to add the restaurant – and I certainly didn’t need the calories from either the dog or the bottle of Sun Drop, but for all the years Marie and I have done this, my visit to Hot Dog Depot was one of the most entertaining and satisfying stops that I’ve made. I had such a blast just kicking back and hearing stories and learning a little more about the business, and Jones’ anecdote-filled life of serving good food to hungry guests. I don’t suppose many of our readers will make their way to this corner of the country, even for the awesome bridge, the quiet riverside walk or the gasoline, which, at $3.09, was seventeen cents cheaper than any place in Georgia I’d seen that weekend, but if y’all do, then this is definitely a place to stop for a dog, soda and a milkshake. Give Willie my best regards.