Last month, one of our readers, Cheryl Kitchens, sent a recommendation that we stop by Bar-H Barbeque near the neat little town of Royston. I agreed that was a terrific idea; I had not been anywhere around these great towns in northeast Georgia that I enjoy so much in a really long time. Bar-H was, therefore, the last restaurant that I deliberately looked up and planned to visit before I set out on my trip. I noticed that I could get there from Athens via one of two roads. I’d driven US-29 through the area many times in the past, but I’d never seen GA-281 before, so that was the one that I took. I also thought about where I might go after Royston. I glanced very briefly around Google Maps and figured that Toccoa and Clemson would be eventual destinations, but I backed away after making that conclusion. I was resolved not to print out directions or use Urbanspoon to lock myself into a schedule. After I left Bar-H, I would be on my own.

Well, I recalled that another reader had once told me about a barbecue place in Toccoa, but I insisted that I would visit it only if I saw it. I wasn’t going to be a slave to the computer!

281’s a lovely drive, with a terrific moment, crossing a popular point where people launch canoes and kayaks, where it looks like you can see for a hundred miles, and it puts travelers right in Royston’s downtown. From there, it’s a mile or so hop back west along US-29 to Bar-H. Brian Hart opened Bar-H in 1996 and there was still a good lunch crowd when I arrived at 1.45. 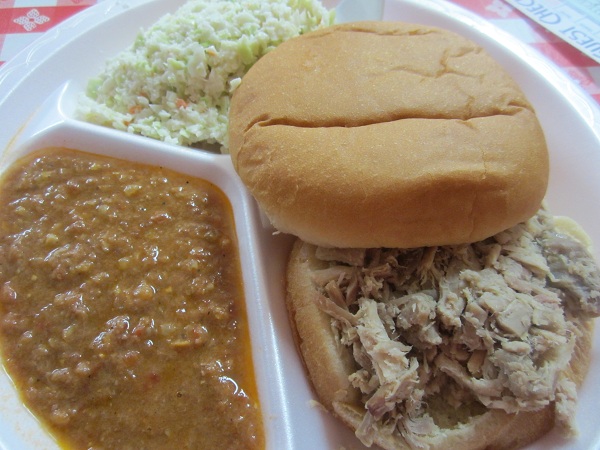 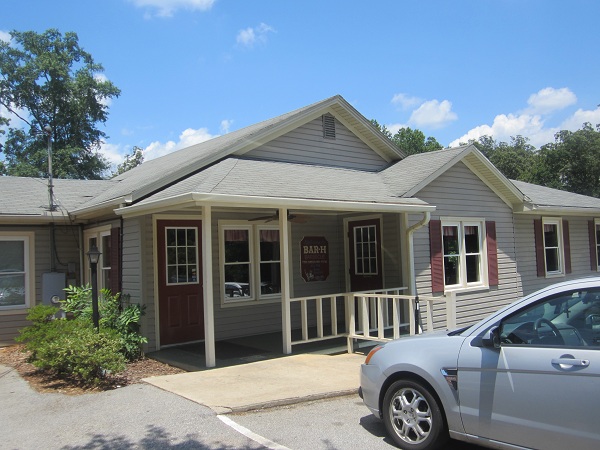 The meal was less expensive than the day’s first down at Holcomb’s, or, indeed, just about anywhere else. Here, a pork sandwich with stew and slaw runs only $6. The pork is very dry, and tastes very much like the meat at Dean’s Barbeque down in Jonesboro. It’s uncanny how similar they are! And, like Dean’s, the meat is transformed from dry and a little bland into something really memorable by way of the sauce. It is the regional standard, a thin tomato-vinegar mix, available as mild or hot, and it is fantastic. Sauce this thin, it is best to just use a little at a time, and not let the meat soak up too much at once.

The stew was solid and tasty, rich with tomatoes and meat, and the slaw was, unexpectedly and pleasantly, sweeter than I was expecting. It seems to be made with just a little bit more sugar than most recipes, and it complemented the strong vinegar taste of the pork really well. In all, this was a fine little stop, and I’m glad that I made it.

From there, I made my way north up GA-17. As mentioned in the previous chapter, I was listening quite happily to WUOG along the roads around Athens. I finally lost the signal between Canon and Bowersville. I started up my iPod again, drove through Lavonia, crossed I-85, and found a really great little roadside sign advertizing some homemade ice cream. Just outside of Martin, there’s one of a handful of Waterwheel shops in the region. 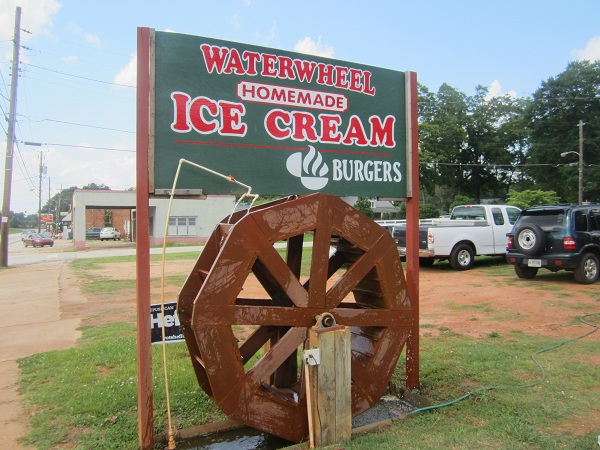 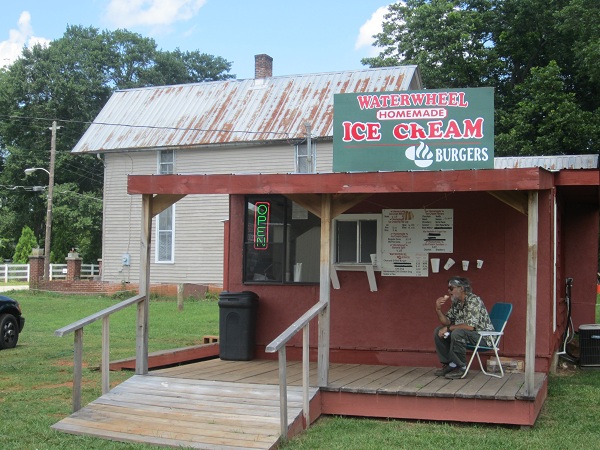 I actually noticed a larger Waterwheel in Royston, but it had closed, depriving me of my desired milkshake. (It should be noted that I always desire a milkshake.) I thought for a moment that the owners had simply packed up and moved, but it turns out that this is the newest franchise in a very small chain that does not draw any attention whatever to itself. In Georgia, there are apparently existing stores in Helen and Elberton as well, and there are also stores in Muscle Shoals and Killen, Alabama and Anderson, South Carolina. There does not appear to be a corporate web site, and none of the stores seem to do much on social media, but then again, these stores can all be safely said to be out in the sticks and probably don’t need such things.

This place opened here in July 2011. The tiny building had been erected in the 1980s and had been home to a barber initially, but it sat vacant for almost twenty years before this gentleman, whose name I did not get, moved in. I had a peach milkshake and chatted briefly with an neat fellow who, noticing my Mud Hens shirt, talked with me about Toledo and Jamie Farr. I enjoyed the stop, but I wish that I had talked a little more about Waterwheel itself, and learned about the business, because heaven knows the internet is no help. Travelers on I-85 between Atlanta and Greenville should know about it, however. Use exit 173 and go north on GA-17 about four or five minutes; the ice cream is much better than anything at the interstate chains.

By this point, I was a little stuffed (you think?!) and had about decided that I wasn’t going to go out of my way to find Toccoa’s Bar-B-Q Shack. Then I blew right past the place at 3.05 and determined that I couldn’t just skip it, and turned around. 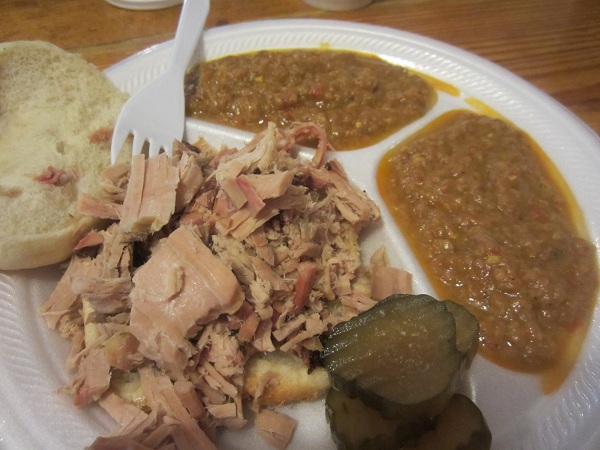 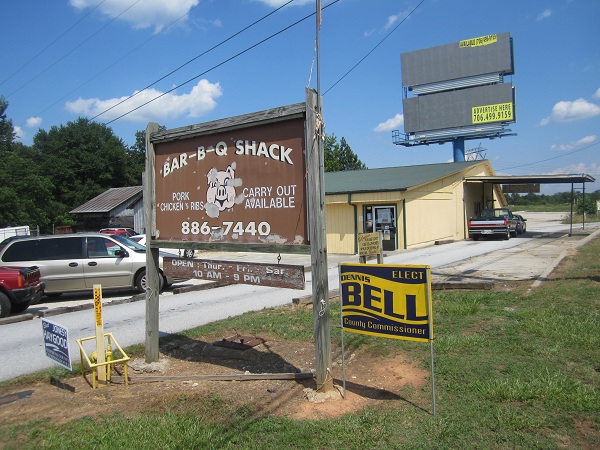 The Bar-B-Q Shack – it is unrelated to a place in Athens with a nearly identical name – opened in 1989, and moved to this building in 1998. The owner is Herman Hart, and the similar name to the gentleman who owns Bar-H did not strike me until after I’d left. I should have asked whether they were related, but in this corner of Georgia, everybody and everything seems to be named Hart anyway.

This is a huge place, with seating for close to a hundred. It is dimly lit, and the walls are absolutely plastered with tributes to the late NASCAR racer Dale Earnhardt. The Intimidator is everywhere you look here, if not his face or his car, then his name, spelled out in neon.

The sandwich plate here is, again, a very agreeable $6. I just asked for a single side of stew and to hold the slaw, as I really had overeaten at this point, but they brought me a double order of stew instead. This was so darn good that I hated to waste it. The pork, cooked for eighteen hours over hickory, was smoky and tender and completely wonderful. It was served up with a few completely amazing homemade pickles. Good heavens, what a meal. It was accompanied by four sauces: the standard mild and hot varieties of the expected vinegar-tomato mix, a thicker and really hot version, and a sweet sauce made for the ribs that just sings with brown sugar. Interestingly, not just the ribs, but the chicken as well are cooked over charcoal here. I was not expecting to learn that.

I made one more little stop up the road, in the parking lot of Bell’s Hamburgers when I got into Toccoa. I did not eat here – a wafer-thin mint would have been lethal at this point – but what a terrific old sign they have. 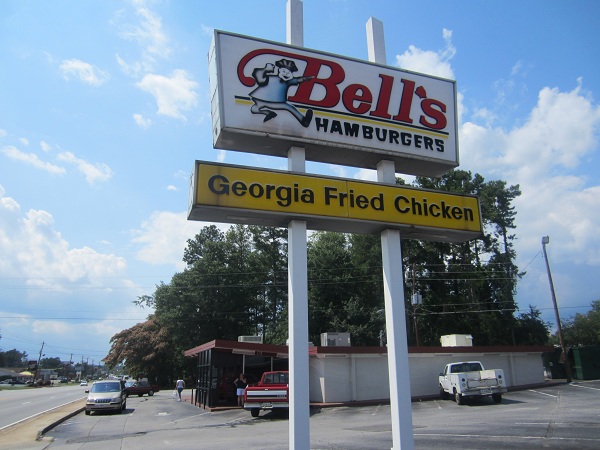 In Toccoa’s downtown, I saw the studios of WNEG. This is a radio and TV station that, until a few years ago, was a CBS affiliate. But its affiliation with CBS only lasted a decade or so; before that, it was an independent station which filled airtime with low-priced syndicated junk for the most part, but it was also the home of a simply amazing three-hour Saturday night program called The Billy Dilworth Show. Dilworth, a columnist and broadcaster, hosted this incredibly curious mix of country music videos and community affairs, with advertising the likes of which you’ve never seen. These ads, for anything from a dry cleaners in Cornelia to a loan office in Commerce to the defunct Clinkoco gasoline chain, were all shot on a VHS camcorder, edited on a beat-up old two-head Panasonic top-loader, narrated by the same announcer, and every man jack one of them introduced you to the owners of the business. Also, every single shot in the ads with the exception of the stationary shot of the smiling owners, was a slow left-to-right pan. Used to get seasick watching the darn commercials on the great man’s show.

It’s easy, unfair and patronizing to play “spot the rubes” when given the chance to look at low-budget local TV like The Billy Dilworth Show, but I’m not kidding when I say that this thing was the weirdest program I’ve ever seen on television. I’d watch, riveted, through every oddball moment and get up for a beer during the Alan Jackson videos. This was television made by the most honest and enthusiastic people I’d ever seen, and yet none of them had absolutely any idea how to interact on TV. Dilworth, who retired from radio and newspapers in 2010, had a genuine love for music and people, and yet was treated almost contemptuously by a production crew who’d get laughed out of public access. There would be episodes where he’d sit silently and impassively, still as granite, while some voice over the telephone spent eight or nine minutes reading the entire summer’s calendar of community events at the Demorest Church of God. One time a “clip” of old folks jumping cannonballs in a lake in the dead of winter proved to be a full six minutes long.

In perhaps the show’s crowning glory, Dilworth had guests from a retirement community, the young social director and two elderly ladies, to talk about how exciting life was in the old folks’ home. One of the great grandmas reached in her purse to give Billy a “monkey” made from a peanut and pipe cleaners. Billy showed genuine and sincere appreciation for this unexpected and oddball gift. Then the old lady remembered that she had a sandwich in her purse and happily began chowing down on her bologna and cheese on white bread on live TV.

Longtime readers know that it doesn’t take much to get me off on a rush of nostalgia. As I turned back from Toccoa’s downtown to US-123, where I saw a sign for Westminster, SC, I was just about as nostalgic as a fellow could be. But I wondered what would be waiting for me up the road. I genuinely had no idea.

13 thoughts on “This land is Billy Dilworth’s land.”