So the other week, I was talking to Jimmy Dean, younger brother of the retired Roger Dean — yes, that’s right, same names as the sausage guy and the Yes album cover guy — about his late father’s barbecue sauce recipe, and I had to raise an eyebrow in appreciation when he said that his father got the recipe from the actress Vivien Leigh. This is Clayton County, after all. Just the day before, a fire at a nearby public storage facility made the news by wiping out priceless and unique Gone With the Wind memorabilia that had been archived there. Google even sent me down a road called Tara Boulevard to get here.

It’s part of this region’s lifeblood to talk big, and if that means evoking that movie, then you’re probably in either Clayton or Henry County. Jimmy might well have been talking the same line of bull in which his brother excelled, but it would be churlish to challenge the legend. His restaurant is the same building, after all, where, if you time it right and you’re in the ramshackle corridor that connects the counter and the dining room, you might make eye contact through the window with a mean-looking cat outside who hangs out on the air conditioning vents. How could you complain about anything, other than the drive to get down here?

It’s been nearly a year since Marie and I stumbled upon Dean’s Barbeque, which is just south of the Jonesboro city limits. On that occasion, we were bound for Griffin and the reliable Southern Pit, and, stymied by the logjam of Spring Break traffic on the interstate, elected to trust navigation and use back roads to get over to US 41. Our route took us past Dean’s, which I recalled from the writeup at Chopped Onion, and I resolved to pop back by sometime.

Having said that, I did wish that I had retraced my steps back from wherever it was that we gave up and left I-75, because Tara Boulevard has, on each of the three occasions I’ve used exit 237, devolved and degraded and turned into one of the city’s nastiest and ugliest corridors. This stretch of Clayton County made way years before for the Wal-Mart and all the attendant sprawl, and then looked the other way as all the national fast food chains shuttered and left behind empty shells for payday loan places and “we buy gold” joints. It’s an unhappy and ugly road. I made my way down to a very good meal, but there are much brighter ways to get there. If Google directs you this way, past Southern Regional Medical Center, find yourself another route. 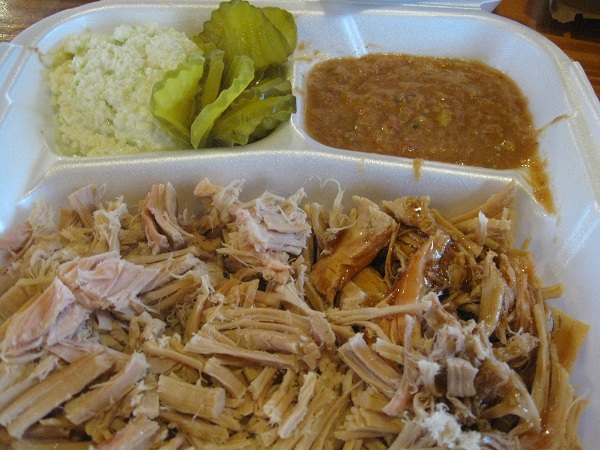 Fortunately, things improved after leaving Tara Boulevard. I even got to drive past a house with a front yard full of folk art dinosaurs made from rusting old radiators and things! Jonesboro itself is charming – I loved the old railroad station – and Dean’s, located a few miles south of the city, has its stretch of road mostly to itself. The restaurant has been running since 1947 and is believed to be the oldest family-owned business still in operation in the county.

I had a chopped pork plate with slaw and stew. For decades, this place only did chopped pork, but Jimmy, who bucked the old tradition and started taking credit cards, is now doing ribs and chicken in small quantities. The prices are a little higher than many suburban shacks, but lower than most in the city or the northern ‘burbs where we live, and they certainly give customers a frankly enormous pile of food.

Jimmy really surprised me with his opinion on the meat and sauce. I found the pork to be smoky, but dry and not really remarkable, until I added the sauce. It’s a thin, very dark and peppery vinegar-based mix, and quite unlike most in the area. The closest that I can come up with is the dark vinegar of Zeb’s, north of Danielsville, which is certainly nowhere near Jonesboro. It is amazing, and it turned some pretty good meat into something extremely good. I loved it completely, and told Jimmy that it really did bring the meat to life. That’s when he said something quite unusual. He said, “Anybody can smoke meat. Good barbecue’s all about the sauce.”

His, flatly, is not a majority opinion anywhere. In the case of his meat, he is probably right, but I don’t think that any reader will have difficulty finding online discussion which states the opposite: the best barbecue stands just fine on its own, dry, and a good sauce complements it. Here’s a meal that really needs the sauce. I don’t know that this will go over well with many of my fellow travelers. For my part, I think it’s terrific. It tastes wonderful to me, and I look forward to visiting again one day. I love that the Dean family does things their own way, without considering convention.

Other blog posts about Dean’s: