Quite a few people have mentioned Cafe Agora in Buckhead to me over the years, most recently a commenter called Chef Helen, who recommended their awesome baba ghanoush. When I told the fellow working the register that I’d heard theirs was the best baba ghanoush in the city, he lowered his brow as though I’d belittled him. “Everything here is the best in the city,” he insisted. Big words for such a small restaurant!

Last month, as I did a little writeup on Mediterranean Grill, I thought about how easy it actually is to not end up eating at this local chain, on account of Marie, strangely, not being all that taken with traditional Mediterranean fare. Seems that I can always suggest two or three things for Marie and she’ll usually not go for the place where I can get a gyro. It works the other way around with David. With Marie out of town for the weekend – her report to come later – I rang David up to see whether he was free. I told him I was thinking about this place, or that, or Cafe Agora, and, as predicted, he chose that. You just have to know who to ask, I guess.

The restaurant is in a teeny little place on East Paces Ferry in Buckhead. There are three spaces out front – $2 for an hour – or you’ll need to find a pay lot, but don’t let these discourage you, oh suburban buddies, because this is a really terrific meal. Plus, if it isn’t too cold – it certainly was last Saturday! – it is within walking distance of Pie Shop, but I think the desserts at Cafe Agora are honestly so darn good that you may not want to go. 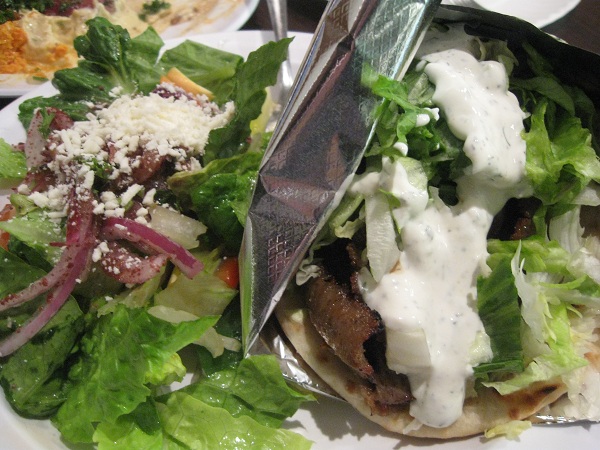 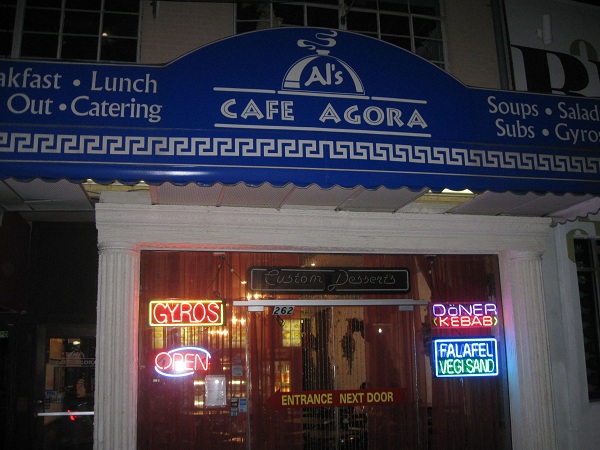 It seems that every person who comes here for the first time has the same experience. The staff wants everybody new to try an appetizer plate called a mezze. It comes completely loaded down with hummus, baba ghanoush, tabouli salad, kisir, piyaz and lots of other things from the rotating bank of daily specials. Everything was delicious. It’s hard to mess up tabouli, so I could say with some confidence that would be pretty good, but everything else pleasantly surprised me by how rich and vibrant it was.

And yes, indeed, the baba ghanoush is the best in the city.

David ordered the mixed grill. This is a huge plate with a salad, rice and, buried underneath some pita bread, a big pile of meat. The bread was brushed with an interesting red sauce made from olive oil, tomato paste, red pepper paste and paprika. I’ve never seen anything like it before. The big pile of meat included chicken and lamb kabob bites, gyro meat, and more lamb prepared both adane and kofta style. David keeps things pretty low-key, so the amount of praise he heaped on this meal surprised the heck out of me. We got the chance to talk with Al, the famous and gregarious owner before we left, and David told him that this was the best meal he’d had, anywhere, in months.

Personally, I won’t go quite that far – I’m still raving about the chopped pork and mull at Midway BBQ in South Carolina – but my gyro plate was still quite fantastic. I got a little sticker shock when it was time to pay – the $8 sandwich that I thought I was ordering turned out to have been prepared in the back with a side salad and extra meat for about four bucks more – but the food was so darn good that I did not wish to spoil things by quibbling over such a small amount. The salad itself was a simple and beautiful pleasure, with flavorful greens, cucumbers and the freshest tomatoes that anybody has ever had in February enlivened by a little balsamic vinegar. I had to know who on earth was able to deliver tomatoes that good this time of year, and Al said that his wife gets them from one fellow at the city’s farmer’s market.

The gyro meat itself was certainly among the best that I’ve ever had. I’d say that it’s about equal with Papouli’s, which is up in Alpharetta and has been calling me to come back for another visit for years now. The meat was so tender, and seasoned so perfectly, that I’ll be comparing everybody else’s attempts to Cafe Agora’s for a long time to come. 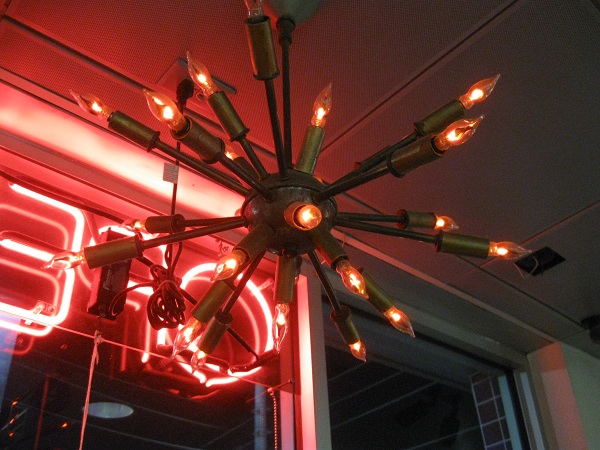 For desserts, Al would not let us leave without trying both his rice pudding and two different varieties of baklava made with pistachios. These were also very, very good, incredibly rich and sticky. No, pie was not on the agenda after these, but after we thanked Al for the meal and made our way, David was in a mood to drive around Atlanta for a while. The road eventually took us to the Zesto on Piedmont, home of the greatest light fixture in the world, where I asked him to stop so that I could indulge in a vanilla malt.

I believe that Marie and I might be stopping by a Zesto in a couple of weeks during her planned “Festival of Dairy” for a chocolate-banana malt, which she’s put off for months and months since the baby, now in his last weeks of transitioning from breast milk to solids, doesn’t react well to dairy. The chocolate-banana malts at Zesto are her favorites in the city. I can name one or two that I honestly prefer, but what they do, they do well enough. There are certainly places in Atlanta that charge more for an inferior milkshake, and I do love Zesto’s effortless evocation of the 1950s and simple, old-fashioned fast food. I’m always happy to spend a little money here.

Other blog posts about Cafe Agora: