I’ve mentioned before that 2004 was, for me, something of a mistake-filled year. Well, the mistake in question lived in Decatur for a while before moving way out to Morgan County, and one of the few very decent things to come of that experience was her introducing me to her favorite restaurant in our area, a wonderful little place with the simple name of Mediterranean Grill. It opened in the late ’90s in the same strip mall as Wuxtry Records and Rainbow Grocery and ChocoLaté Coffee, across the street from Evans Fine Foods and it is completely delicious. I have visted many times, and the only thing on their menu that I don’t really like is the baba ghanoush. I’m certain that they won’t take offense to hear that they don’t do one single thing to my liking, because they do everything else incredibly well.

In fact, I’d never had baba ghanoush anywhere before, not knowing what it was. It probably never registered with me that there was such a dish, if ever I was at a restaurant that offered it, because when the mistake in question occasionally used it as a pet name for her small daughter, I had no idea what she was talking about. So quite some time later, she took me to Mediterranean Grill, ordered some alongside whatever else she was going to have for lunch, and explained that this was her comfort food. I had a little taste with some pita bread and did not like it at all, and stuck instead to hummus.

Some months later, the mistake in question consigned, mostly, to history, I was with David in another restaurant, since closed, that served Mediterranean food. While we were at the register considering what to order, I made the mistake of saying aloud to him that I’d be having hummus with the plate that he suggested, as I didn’t care for baba ghanoush. I was unaware that the chef was spectacularly proud of her baba ghanoush and she bristled, turned and stormed back into the kitchen. There was a short moment of shared awkwardness before she returned with a small plate and a spoon and ordered me, “You try this!” It was magnificent. Until the place closed in 2007, I must have eaten my weight in it. And just think: I never would have enjoyed all that spectacular baba ghanoush if Mediterranean Grill’s didn’t disappoint me.

In the meantime, while I was enjoying baba ghanoush in Marietta, Mediterranean Grill became a regular destination whenever I was near Decatur. I can honestly say that I completely love everything else on their menu that I have tried: gyros, falafels, shish and kofta kabobs, their wonderful home fries-like Greek potatoes and their creamy and magical Jerusalem salad. All that time, I enjoyed meals there with lots of different people, and it never really registered that the restaurant had a location much closer to me, and I need not drive all the way to Emory to try it. 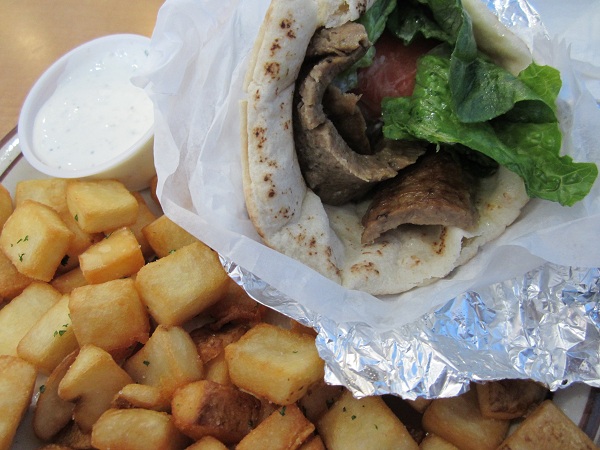 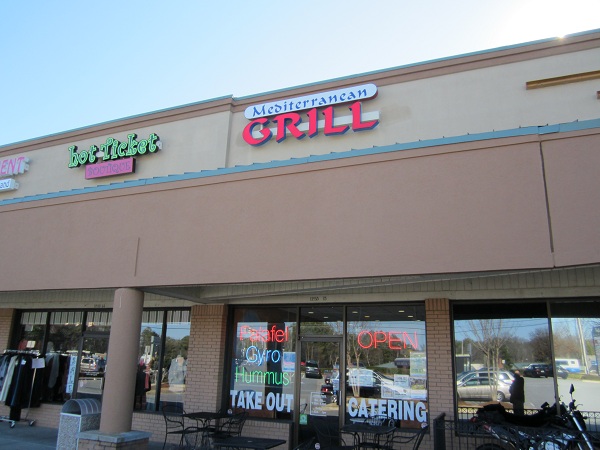 Despite having this favorite food only about fifteen minutes of sprawl and traffic lights away from our house, I had actually only visited once before this past weekend. Not long after Marie and I visited in late 2009 with our friends Samantha and Todd, we started the blog and sidelined reliable favorites in favor of trying new places. I always intended to get back for a meal and feature it here, but Marie unwittingly kept shooting me down. On an evening where we didn’t have specific plans, I might, for example, ask Marie “What are you in the mood for? I was thinking maybe Mediterranean, or perhaps Thai?” Actually, phrased like that, it was not so much Marie shooting me down as it was me doing it to myself. Given the choice, Marie would probably pick a Thai place over just about anything.

I finally gave myself an opportunity to have another order of their delicious gyros and Greek potatoes last Saturday. I had an appointment just a couple of miles away and took the camera and enjoyed a really delicious lunch for just under seven dollars. Actually, the best time to go is during the week. They have a “businessman’s lunch special” that just piles you down with excellent food for even less than the small amount that I paid. All of their prices here are very reasonable, and the food is sublime. The decor is cluttered and tacky, like a neglected fast food chain, and the small Marietta location seems to quickly fill up at just about any hour. This shouldn’t be surprising; places this popular and well-loved are always going to be busy.