Marie’s brother Karl was in town a couple of Saturdays ago and in the mood for a burger. I don’t know that Marie and I were being the best of hosts by not taking him to a reliable favorite instead of taking the chance on something untried, but we wanted to visit someplace new for our blog and so passed on a trip to Farm Burger or something excellent like that, and instead looked on Urbanspoon for the highest-ranked burger joint in Atlanta within a reasonable drive where we had not visited.

Roswell is just about the limit of a reasonable drive for us if we’re not popping on the interstate, and I feel strongly that we could do a much better job covering the food in this town anyway. It’s a quite nice drive down Post Oak Tritt Road, although it’s not the sort of commute that I would want to drive every day. For almost three years, I did. It was a bit much, in the end. Still, every couple of months, it is doable. So, about half an hour through neighborhoods later, we made it to Lucky’s Burgers and Brew, a very nice little place that opened in the summer of 2010. The selection of beers is a little disappointing if you prefer a deep collection of local breweries, but the burgers are very good.

It’s an even more satisfying trip if you want a meal out with your dog. As gimmicks go, this is a pretty good one. The restaurant is named after the owners’ golden retriever, who spends many afternoons hanging out on the pet-friendly patio. It is a dog-friendly, family-friendly sports bar, with photos and drawings of dogs all over the interior. Now, unless they’re named Snoopy, or Dougal, or Uga – or Russ, should an Uga be unavailable – I don’t have any liking for dogs myself, but I do enjoy restaurants that take a theme and run with it. 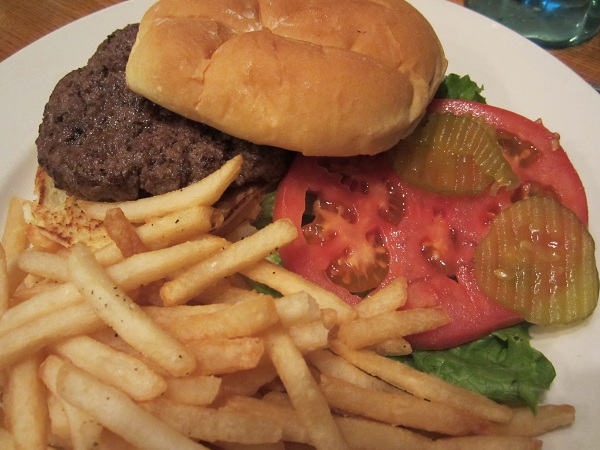 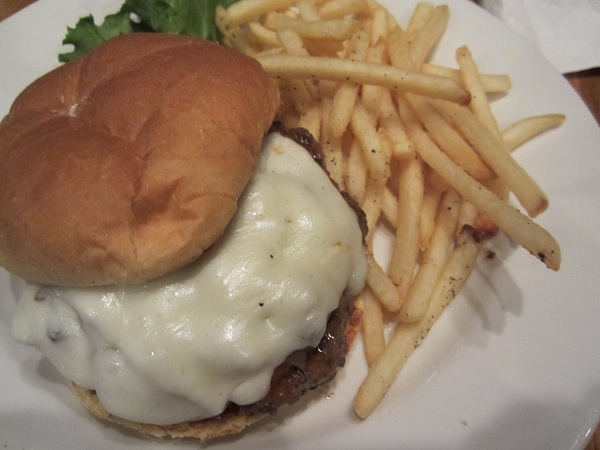 We arrived around six and took one of the last available tables and the absolutely last highchair. I’ve never seen so many babies in one place outside of daycare. The Saints and the 49ers were going back and forth and the sun had gone down. My attempts to photograph the outside in the low light failed completely; should you be curious what the place looks like, Food Near Snellville made it here during the daytime and got a good picture of it.

We shared an appetizer of onion rings and were very pleased with them. The soft and crumbly breading had just enough of a zesty kick to really impress. These were much better than the strangely bland fries that accompanied the burgers, which were really quite good. Marie just had a basic one with lettuce and tomato, and her brother went with one that came with bacon and blue cheese. I was taken with the idea of the Berga Masco, served with marinara sauce, mushrooms and melted cheese, almost a chicken parmesan made with ground beef instead. The resulting sandwich was indeed very good, but it was also almost comically messy. Much as I liked it, I did find myself wishing that Lucky’s would look into a firmer bun, or possibly toasting it, for creations this prone to disintegration. All of us were very pleased with our burgers.

Incidentally, the messiest hamburger ever made, anywhere, was the “Sloppy Burger” that I concocted with the short-order cook at the office cafeteria at Ravinia Three some years ago. It had chili and melted cheese and slaw, among other things, and provided a second meal when you ate the resulting flotsam atop the fries in the little cardboard boat. With a fork.

For a place that welcomes families, Lucky’s seems to want to stride that line between comfort food and silly edginess. They offer a burger called The Undertaker with fried onions, fried eggs and bacon, but this pales beside their absolutely ridiculous concoction called The Grim Reaper. This was prepared for an eating contest held last summer; photographs of the debauchery are displayed towards the back of the restaurant.

In all, this was not a bad evening out. In Roswell, I do prefer the burgers at Rhea’s, but they’re not open in the evenings, and neither the timelost style of that place, nor the my-way-or-the-door approach really lend themselves to nights out for families even if it was. I’d like Lucky’s more if they got in more beers from Sweetwater or Terrapin instead of all the nationals, but they certainly do a good job with what they’ve designed. It’s a fine place to spend a few hours with friends.

Other blog posts about Lucky’s: