I did you good readers a terrible disservice by forgetting about Rhea’s! I should have found time to pop back over to Roswell and sample their food and take some pictures ages ago. I was introduced to it by a nutty girl named Kristi, a former co-worker from a job that I once had in Alpharetta. She was emphatic that theirs were the best hamburgers around, and so I had a few suppers at the closest location to the office on the occasional long workdays at the end of the month that had me getting an evening meal before driving home. Doing a little research for some background now, I see that she’s still preaching the good word. I found her in the comments of CitySearch, praising Rhea’s.

But no, they had slipped my mind entirely until this past fall, when Marie and the children and I were driving back from a less-than-satisfying lunch in Roswell via a different back way than I was used to driving and sped past the original location. I had wondered where “Rhea’s I” might have been when I was stopping for a burger about once a month at Rhea’s II. There are four locations: the original is called Rhea’s Take Out Foods, and it’s just a hop from Roswell’s downtown at the corner of Canton and Woodstock. Rhea’s II is north of town on the way to Alpharetta, and Rhea’s III is in that big development on Crossville Road with the Trader Joe’s. There is a fourth store that I’ve never visited; it is a little ways south of town, in the Sandy Springs/Dunwoody area.

I was finally prompted to get off my tail and go back for lunch after Todd Brock wrote about them for A Hamburger Today. The comment thread contains the usual whines and moans from intown paranoids who can’t bear the thought of crossing I-285, but the article itself is well-written and will certainly do a better job than I can in making readers hungry. I’ll do my best, though. 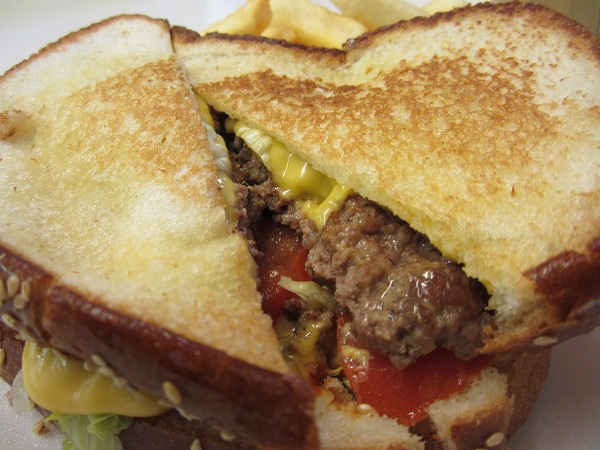 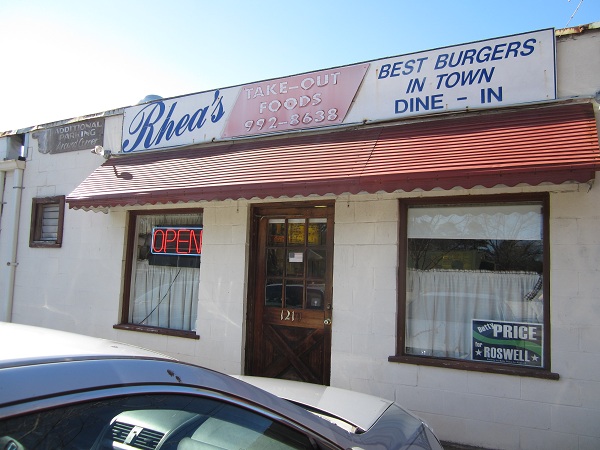 Most restaurants trace their history right back to the opening of the business, even if the current owner has only been in charge for a short time. That’s not the case here. Rhea’s Take Out Foods opened in the 1960s, and information about that incarnation is really thin on the ground. The business was purchased by Jimmy Smith in 1983, and that is the year that they consider this place to have opened. My fellow Roadfood fans definitely need to come give the original store a visit. From the peeling signage to the tiny interior and hardly-updated menus, this place has a classic dive look that only authentic holes in the wall can offer. The menus still reprint a quote of praise from Gary McKee of WSB Radio. I could not, for the life of me, remember when Gary McKee was with WSB. It’s been at least thirteen years. In the back, on the way to the restroom, the original soda dispenser, with room for four whole beverage choices, is unplugged and being used as a big red storage table.

The burgers are griddled up and served on buttered French bread. The best way to enjoy them is with cheese, because Jimmy smashes them up so much cooking them that they start to crumble up and break apart; the cheese helps hold the meat together. Shredded lettuce, gooey tomatoes, onions and liberal squirts of ketchup, mustard and mayo demonstrate that this isn’t anything new or weird, just a basic, classic burger done old-school and done perfectly, reminiscent of the burgers at The Red-Eyed Mule in Marietta. I wish that they hand-cut their fries here, because they’re the only sour note. The burger is simple and it is wonderful, and it deserves a little better accompaniment.

One thing that I thought our meal lacked was a milkshake to finish it off. Had we been at Rhea’s III, where Marie and I once ate back when we were dating, we could have just walked to the Bruster’s next door to get one. Fortunately, Rhea’s III is just maybe five minutes’ drive from the original store, and I didn’t mind the detour. 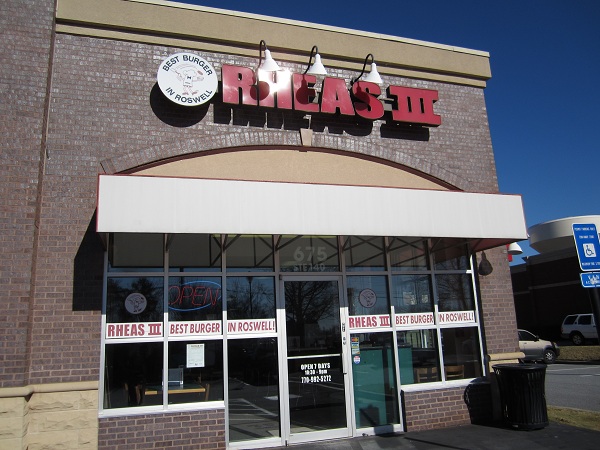 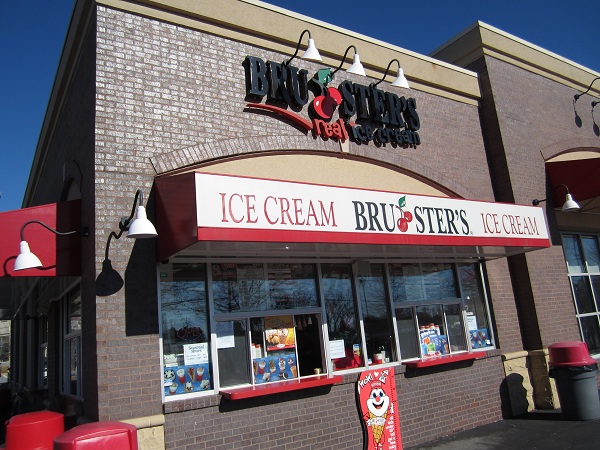 I don’t know how many Bruster’s stores there are around town. Too darn many, probably, but they’ll do when a fellow is too many miles away from Morelli’s. They didn’t seem to have any flavor that I really wanted, so I settled for a half-and-half vanilla and strawberry. Marie enjoyed their take on an orange freeze, made with sherbet and Sprite. It was a very nice, windows-down afternoon, the last Saturday – heck, the last day – of 2011, and a perfect day to spend with family, sipping ice cream treats while driving around. Every day should be so nice.