Late last month, we were very pleased to be invited for a truly nice meal at Davio’s Northern Italian Steakhouse along with several other local media types. Amusing myself, the first draft of this little story featured a little playful teasing that not as many active bloggers were present as there should be. After all, magazines get thrown out while blogs are forever, I said, knowing full well that wasn’t true as I typed it. Then I went and picked a fight with Roadfood.com about deleting pages off their site. I may be a playful tease, but there’s being silly and there’s opening yourself up for having some editor of some glossy magazine clear his throat about how I obviously know darn well that the internet’s every bit as ephemeral as the dead tree format and to hush my loud mouth.

Well, anyway, before some big electromagnetic pulse wipes us all off the Internet, I’d like to leave some record that we attended this little event at Davio’s and had one utterly amazing meal under the careful attention of some really first-class service. The food and the wine and the servers were all quite terrific, and while Davio’s had not been on my radar before they reached out to us, I am very glad to know about them. I enjoyed this visit even more than I have enjoyed our experiences with their few high-end competitors in this market, such as the excellent Capitol Grille.

The modern Davio’s started in 1985 when Steve DiFillippo purchased a restaurant by that name on Boston’s Newbury Street. Davio’s is one of those uncommon cases – Rhea’s here in Roswell is another – where the business does not consider its history as stretching back to the restaurant’s foundation, but rather when the present owner, and present mindset and worldview, got involved. Mr. DiFillippo, who is also a contributing writer to the Huffington Post, has been making the case for years that owners need to be out of the kitchen and circulating with guests. Davio’s was too small when it first opened to justify hiring a general manager to ensure that everybody paying for a meal was completely satisfied. That was on his shoulders.

Almost thirty years later, Davio’s is large enough to have some really fantastic general managers at their locations to provide that service. Claude Guillaume is the GM at Davio’s Atlanta store, which is the fourth in the carefully growing chain, and he proved to be a hands-on class act. Anyway, after the Davio’s team outgrew their tiny Newbury Street home, they moved to another place in the Back Bay, followed by a second store in suburban Foxborough near the Patriots’ stadium. Philadelphia and Atlanta soon followed, opening here in the front of Phipps Plaza in 2010. The fifth restaurant in the chain, a slightly modified concept called Davio’s Cucina, opened for supper just last night in Chestnut Hill, Massachusetts. 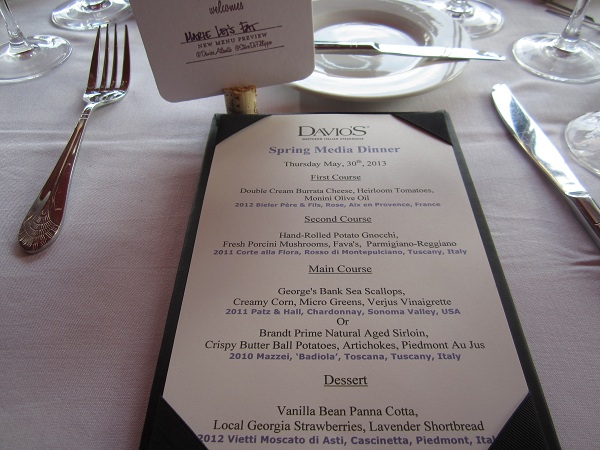 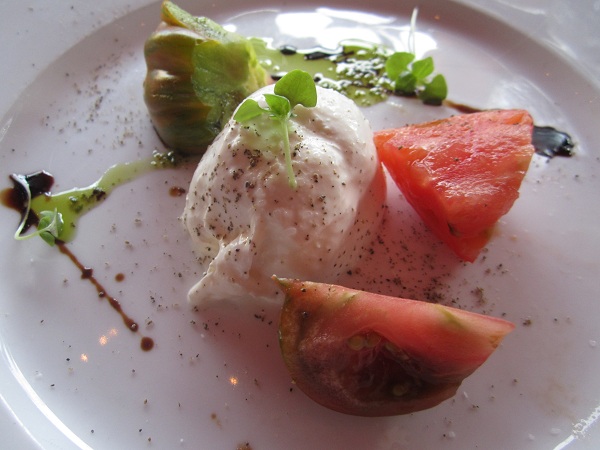 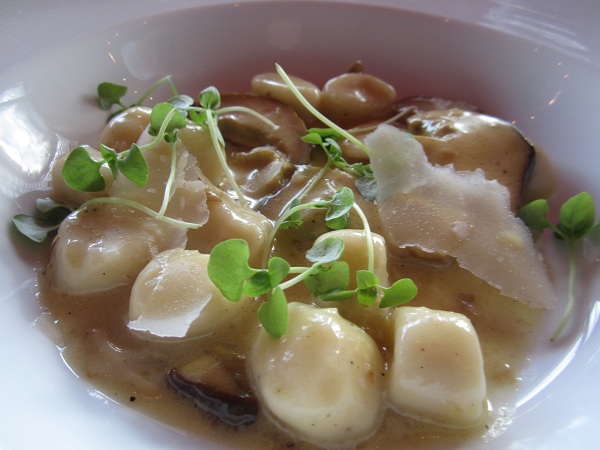 With all the activity going on to get everything perfect for Chestnut Hill, it was pretty wonderful for Mr. DiFillippo to come down and attend this launch for their summer menu. Things got started with a nice reception, and we enjoyed catching up with Malika from Atlanta Restaurant Blog while enjoying Philly cheesesteak spring rolls, Snake River Kobe beef meatballs, and these awesome little skewers of Georgia peaches and prosciutto with a drizzle of aged Balsamic.

The meal started with a course of double cream Burrata cheese served with Heirloom tomatoes. We followed with something so tasty that Marie suggested that she’d have been perfectly happy with it as an entree: gnocchi served with Porcini mushrooms and Parmigiano-Reggiano. It was excellent. 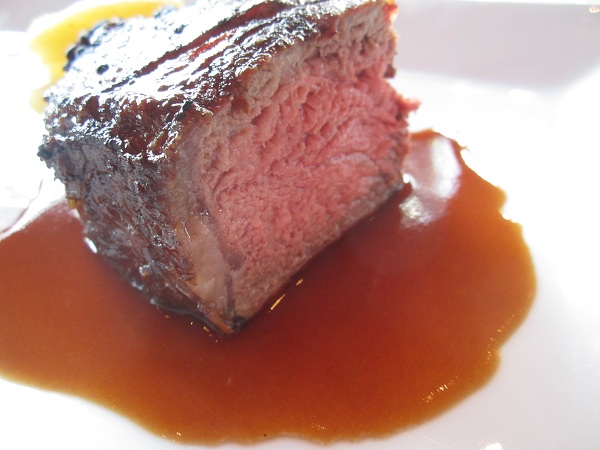 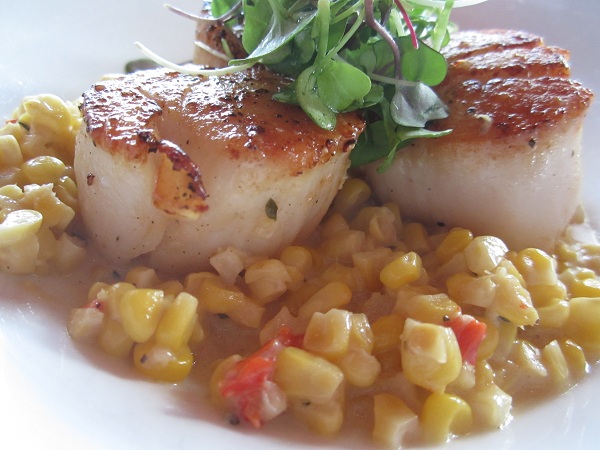 Of course, our regular readers know all too well my tragic and woeful tales of “menu envy,” because Marie almost always orders an entree that I end up enjoying more than my own. We’re each pleased to say that did not happen here. I had the George’s Bank scallops, served over creamy corn and greens, and they were sublime. Easily among the best scallops that I have had, anywhere. Marie was perfectly happy with her sirloin, which was certainly satisfactory in every way, although I did not care for the “Piedmont” sauce, finding it too sweet to complement the steak 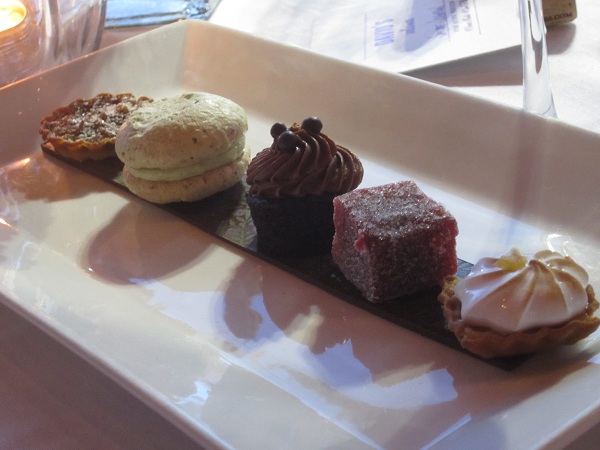 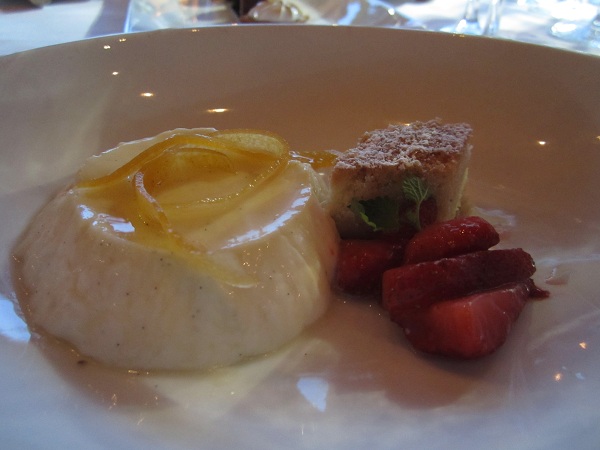 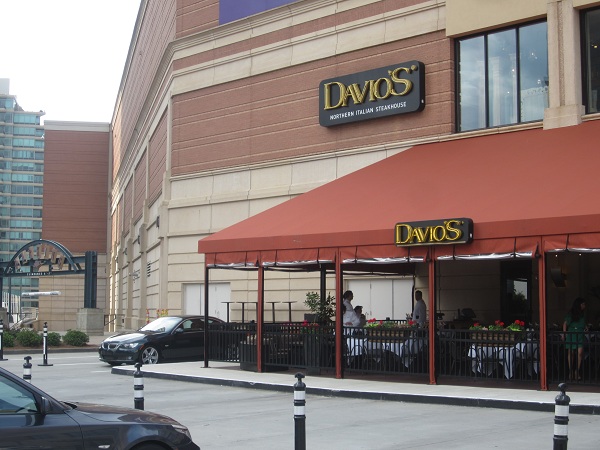 For dessert, we really enjoyed a vanilla panna cotta, served with fresh berries after little flights of desserts were brought to each table, almost like getting yourself ready for the pleasantly richer taste of the vanilla. We had quite a meal, but I would have been happy to have another three or four dishes of that.

In all, this was absolutely a four-star meal. It’s good to try something really nice like this every once in a while, before we’re back in the woods exploring barbecue, you know?