I first read about Kitsch’n 155 back in the summer when the excellent Tomorrow’s News Today blog did a really encouraging preview of the place. I don’t have quite the love of silly ’60s kitsch that I once did – Marie and I, finding less of value in possessions of late, seem to be decluttering down to a zero point of stark austerity to compensate for the unbelievable clutter that comes with a baby – but certain design elements of this retro style are still incredibly appealing. I love clocks and ceiling fixtures with all those silly antenna-like appendages, and the jaunty “kitsch” font – I’m not sure what it is called – that invariably accompanies photo books about the silly 1950s and 1960s found objects that inform the style.

In their report, Tomorrow’s News Today also linked to a favorite site of mine, Not Fooling Anybody, a glorious site that has been promising updates for ages and ages. It’s become so much a part of our road tripping vocabulary that whenever we see a distinctive, vintage fast food building that has been retrofitted to become some other business, we point it out and say “Not fooling anybody!” One fantastic example, just down the road from us, is Dive Shop on Sandy Plains Road, which clearly used to be a Taco Bell. It’s actually about three doors down from a former Del Taco, known to area residents in the late ’80s as “The Murder Del Taco,” which later became a breakfast and meat-and-three place called Joyful Diner. We were sad to see that diner close.

I mention this because owners Randy and Lisa Stewart, serendipity on their side, found a terrific location for their restaurant. It’s the former Athens Pizza Express on Clairmont, which, of course, used to be an Arby’s. A lot of garish paint later, and they are cooking up some mean burgers. Ten essential Atlanta burger joints. Does that sound like a good chapter for a first-of-the-month entry? Maybe in January. 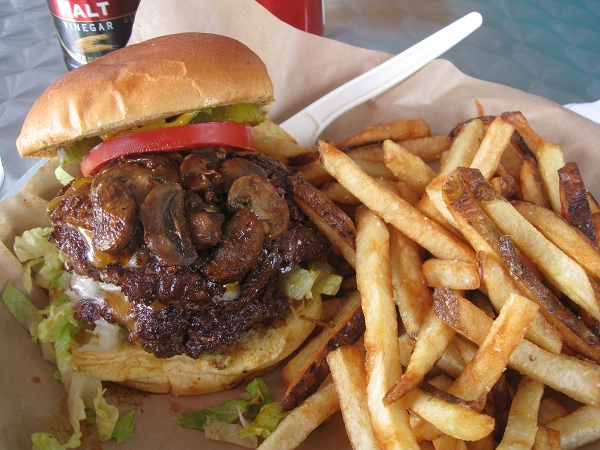 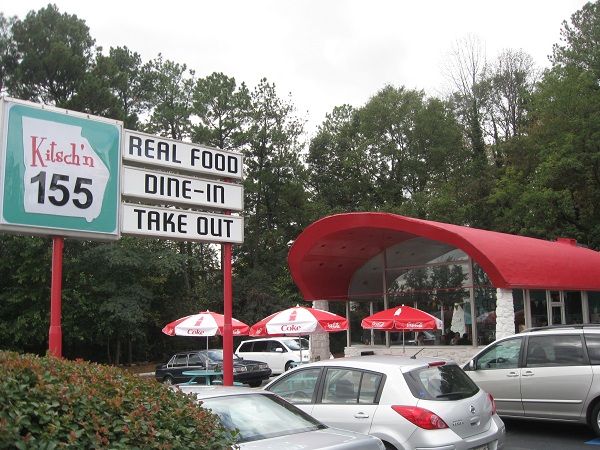 David had driven past this place a few months back and thought, correctly, that I’d like to see it. He and I actually had other lunch plans a couple of Thursdays back, but we were over at the Book Nook on North Druid Hills and I suggested we stop by and try this place instead. The goal here is classic American comfort food, done extremely well. They’re doing all the expected things like getting their meat from local farmers (Coleman and Creekstone) and cutting their fries fresh. Nevertheless, I mused, as we were waiting for our orders, that I probably should have ordered the day’s special, which was cod with two sides. Priced at $9.50, it’s a better value than a cheeseburger with just one side. That was before I had a bite of the cheeseburger, which was even better than I thought it could be. Marie needs to try one of these; I’m not sure that they aren’t even better than Farm Burger.

David had the grown-up grilled cheese, served with bacon, tomatoes and onions, and said that it was quite good. He also had a cup of chili which was better than any chili that I’ve sampled in ages. I really liked the touch of adding fresh jalapenos for maximum punch. I declined to ask them to add jalapenos to my burger, incorrectly thinking that they’d just be the far less tasty canned ones. David figured that he’d rather pass on the peppers once he saw them on his chili and asked whether I wanted them. Despite my burger being a gigantic, sloppy mess already, I found room.

The one sour note was the extremely high prices for bottled sodas and, in turn, ice cream drinks. After already spending $10 for a burger and fries, $2.50’s just feels far too much to pay for a bottle of Red Rock or Cheerwine, although, sadly, a few days later, I ran into another new restaurant that charges even more for a glass bottle of a small-market soda. I did think about getting a float when I finished and had a bit of a sweet tooth, but I couldn’t justify the cost. For five bucks, I could make many Cheerwine floats at home. 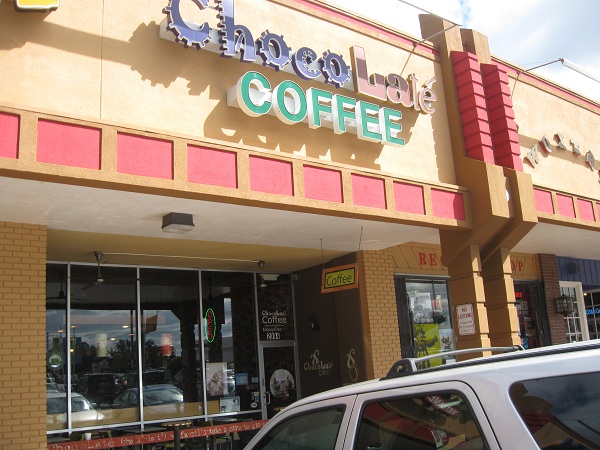 Fortunately, David had a mind to spend some money at Wuxtry, and there was a coffee shop right next door. I found my dessert – an iced cookies and cream frappe, served with an Oreo – and was perfectly pleased to enjoy something that I can’t make at home, for about a dollar less. ChocoLaté Coffee reminds me in the best possible way of Jittery Joe’s in Athens, with lots of comfortable couches and a wonderful, relaxed vibe with friendly servers having a great time at work. Certainly a fine day’s outing, I think.

Other blog posts about Kitsch’n 155: