As I’ve grown up, I’ve watched the staff at Fellini’s get younger and younger. It’s been an amusing experience.

Fellini’s must surely be the last of the bizarre absences from this blog, a place where I have eaten many, many times before but which fell by the wayside when Marie and I made it a point to try new restaurants. (Well, about two years ago, I had a notion to write up Martin’s, which is sort of the northside-OTP counterpoint to the southside-ITP Zesto, but that would require actually eating at one again, which isn’t a chore, but isn’t something I’ve been in a hurry to do, either.) Anyway, I’ve had lots and lots of quasi-New York-style slices at Fellini’s, at several of their locations. They presently have seven restaurants in the Atlanta area; there have been as many as ten. When I first visited Fellini’s, it was in the mid-80s in Little Five Points, back when Wax ‘n Facts was half its present size. They had a store in the plaza which morphed into Little Five Points Pizza many years ago. That place was so wonderfully grungy, full of cigarette smoke and punk rockers.

When I graduated high school, I talked my parents into taking me to dinner anywhere in the city, and chose this Fellini’s location. That was also, in part, because I had some graduation money that I wanted to spend on records. So we shopped for a little, my parents marveling at – slash – recoiling from the recently-expanded Wax ‘n Facts and its remarkable collection of vinyl and junk, and then walked to Fellini’s. My mother stuck her head in the door and said that I’d need to pick someplace else. We ended up at the Fellini’s on Peachtree in Buckhead. There were far fewer punks with funny hair and piercings in that one. She still didn’t like the pizza much.

I call Fellini’s “quasi-New York-style” in deference to two different New Yorkers that I have known who just flat out don’t think that they do it right. One of those two admits that it’s pretty good, but somehow “wrong.” Another tells me that the crust is the problem, that it is far too chewy and with no crispness. Fellini’s does slices in the New York fashion, but evidently they have more water in the dough than is acceptable among the faithful, who suggest LaBella’s or Baby Tommy’s for authenticity instead. I defer to others’ expert opinions, but the results are still incredibly tasty to my mind.

Towards the end of the nineties, Atlanta was home to a popular “alternative music” radio station called 99X. They’re actually still around on some other FM frequency, just irrelevant and backwards-looking. Anyway, in their heyday, they had just about the last morning drivetime crew worth listening to in any city. They were called The Morning X, and they were hilarious, much more entertaining than the umpteen thousandth spin of “Runaway Train” by Soul Asylum. Every so often, one of those knuckleheads, Jimmy Baron, would just tee off on how he didn’t like Fellini’s at all. It was great radio. I used to pick this up and yell back at my car stereo, as you’re supposed to do. “Maybe we can get Fellini’s to send us some free pizza,” Steve Barnes would say, and Baron would mock, “Maybe they can send us some good pizza?” A thousand listeners shouted back at him. One or eight were dumb enough to call the station and complain, ensuring at least eight people would stick around through the next ad break.

Since the closure of the Little Five Points store, the one that I’ve visited most often has probably been the one on Roswell Road in Sandy Springs. In 2001, when Roxy Music played Chastain Park, I co-hosted a pre-show party for members of a fan mailing list at that location. It’s absolutely perfect for a quick meal before popping over to Chastain, to the point that I’ve done it regularly since. I ate here before seeing David Bowie in 2004 and before seeing Bob Dylan in 2006, for example. I took my errant teenage boy to the Bowie show; he raved and cheered, but I think that he liked the pizza before the show even more.

In point of fact, the boy found himself loving Fellini’s so much more than the owners’ sister restaurant, La Fonda Cantina, that it became routine in the middle-00s for him to decamp for a couple of slices while the rest of the family enjoyed La Fonda. This is usually easy to do, as several places in town have a La Fonda right next to a Fellini’s. We were at the Peachtree La Fonda this one time, which, back on my graduation night, had actually been the Fellini’s. They built a big new building with lots of outdoor seating for the pizza place, and moved the paella into the old corner shop. Whatever we ordered at La Fonda had not been what I wanted in the end. That boy had two huge pepperoni slices. I ended up with menu envy over an order from another restaurant entirely. 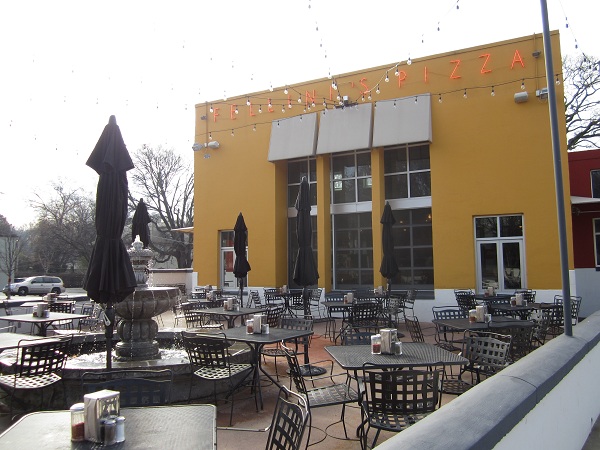 Last Sunday, with Marie’s avoidance of pizza absolutely breaking my heart and my will, I took advantage of her being out of town with the baby to finally treat myself to a couple of slices. I went to the one ON PONCE, in deference to a very old joke that I doubt that anybody else present that evening in the early nineties remembers, but every time I’ve driven past the Fellini’s ON PONCE, I remember that this place is ON PONCE.

Nostalgia isn’t Fellini’s prime ingredient yet, but it’s up there. I had one slice with tomatoes and pepperoni, and one with tomatoes and extra cheese. I have to say, I really do like that extra cheese isn’t some sort of “premium,” double-priced item here. Two giant slices and a Cherry Coke that I did not need came to eight bucks and change. The place was packed with families from the neighborhood. There are always kids here, at all hours. It’s a great place, with one of my favorite pizzas in the city, no matter what Jimmy Baron said.

(Update, 8/25/12: I had lunch at the Howell Mill location today for the first time, and remembered to bring my camera so that I can show off just how huge these slices are. Nobody needs to order three. I don’t know what I was thinking – I know these darn things are too big to eat three at a time. Also, if you order by-the-slice, then the white pizza is made atop a previously-prepped slice with red sauce, as is apparently common in New York.) 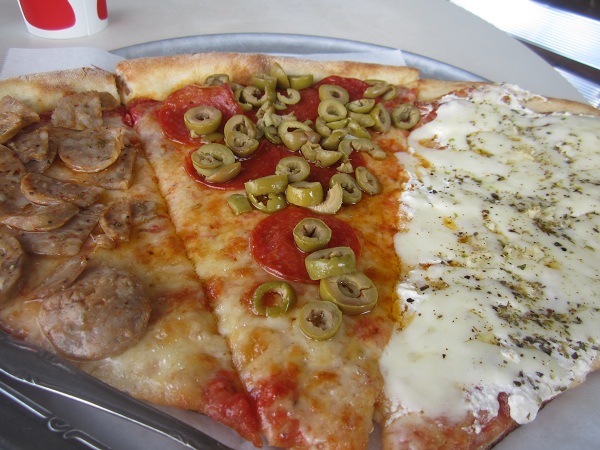 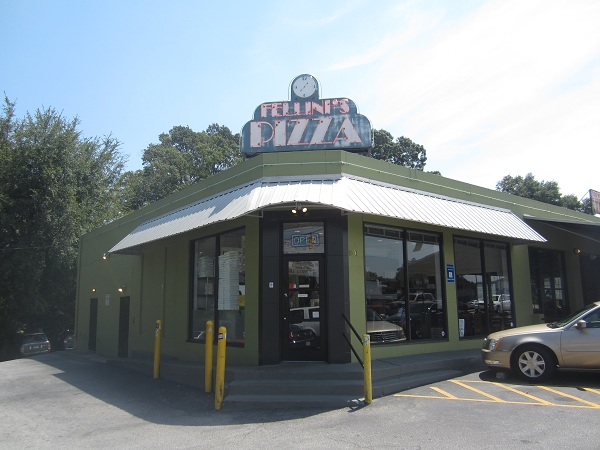