We had been wanting to visit McKay in Chattanooga for another round of book selling. We are in the process of changing our plans to relocate to Asheville from “pipe dream” to “possibility,” and one thing that definitely needs to change first is the size of our material world. So, over the last several weeks, we have filled four diaper boxes with old paperbacks. On the last Saturday in February, we made plans for another day trip to one of our favorite cities, incorporating stops at our usual places, including Pure Sodaworks and the Creative Discovery Museum, along with some new restaurants. Best of all, we met up with some of the team from The Boys Made Me Do It, a terrifically fun blog, to break some bread and play at the children’s museum.

We joined Cara and a couple of the boys referenced in the title of her blog – her husband and their youngest – at Lupi’s flagship store downtown, prompting me to realize that, of all the times we have visited Chattanooga, this was the first meal we’ve actually had in the downtown central tourist district. The grid of streets is sort of dominated by larger chains like Applebee’s and the like, but a few local places poke their noses through. When Lupi’s first opened this store in 1996, it was just as the city was roaring to new pedestrian and tourist-friendly life. It was a super time to open a New York-styled pizza place with a local flair. They routinely win the local CityScope award for best non-chain pizza. Lupi’s has since expanded to four locations in the area, with the most recent opening two years ago in nearby Cleveland. A fifth store is apparently in the works for Ooltewah. 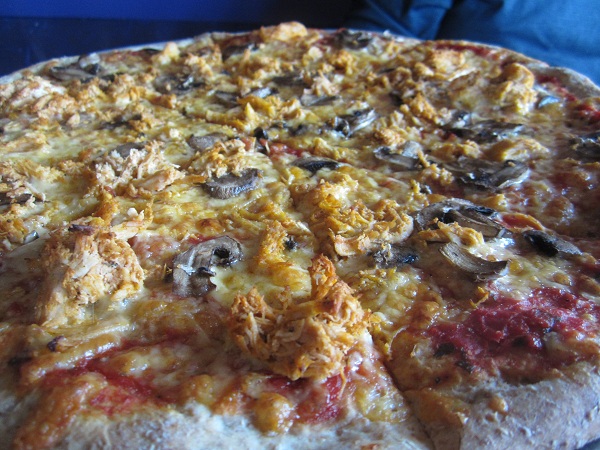 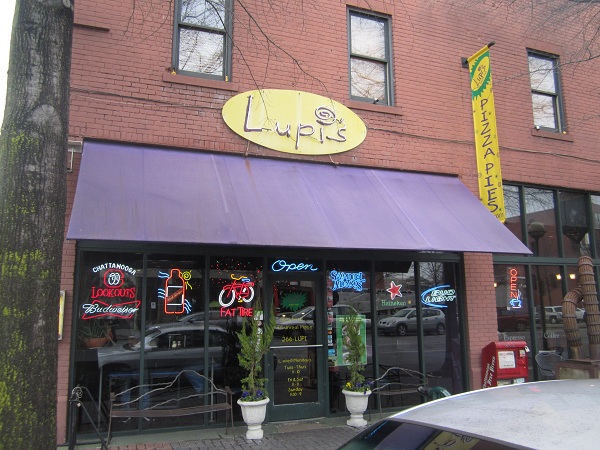 Since they offer ground beef and ground sausage from a local supplier, I was keen to try that, but the girlchild had one of her mercurial moments and suddenly decided that she did not like sausage and insisted on chicken. Regular readers might recall that it was only a month or so ago that she decided that she hated chicken forever and ever. Sometimes, a little predictability in my life sure would be nice. So we settled on a 16-inch pie with cheddar cheese rather than mozzarella, spicy chicken, and local mushrooms. Cara suggested that the mushrooms might come from an outfit called Monterey, which is located an hour or so up the road in Loudon. We did get to taste the sausage since our friends got some on their pie, along with a homemade mozzarella appetizer. We were pleasantly surprised to find that this mozzarella was considerably firmer than the soft and creamy buffalo-style cheese that we’ve enjoyed as an appetizer at Varasano’s and Vingenzo’s here in Georgia. It has a terrific taste that’s both light and flavorful.

The experience was, in a way, similar to what we’re used to from Fellini’s Pizza in Atlanta, only with more of an eye on sustainability with local ingredients and recycling. And it’s not only the ingredients; we were very pleased that Lupi’s is selling bottles of Pure Sodaworks. More on that in a chapter later in the week, but I told one of the employees how happy I was that they were carrying them. There’s nothing that we like to see more than a local business using local ingredients in their food and selling drinks from a local business as well. Their flour, too, is local; it comes from an area farm called Sonrisa.

Our baby was fairly well behaved for the visit, although he still hasn’t quite got the hang of greeting people with a “hello.” He will typically offer one after several minutes. Their baby, on the other hand, was just a perfect little gentleman. He’s three and, like many his age, is a huge fan of Pixar’s Cars and brought a couple to the table to stay busy while the grown-ups talked of restaurants and blogs. We shared favorite restaurants in the area, with me giving an enthusiastic recommendation to Kevin Brown’s Burgers in Ooltewah. Eventually, though, we decided to give our babies a long mercy break and walked the block over to Creative Discovery for them to get their wiggles out.

But before I go… somehow, in all the times we’ve driven around downtown on our way from the restaurants around the Choo-Choo – yes, we still need to try Porker’s – into downtown to cross the river, we have never noticed Allbooks, which is just two doors down from Lupi’s, and about which a co-worker had told me ages ago. We didn’t have time to really linger before lunch, but this is a very promising used bookstore, particularly if you’re interested in older hardcovers. Or yarn. We’d like to revisit someday when we have much more time available for browsing.

Other blog posts about Lupi’s: