This is Marie, suitably contributing an article about dessert. Our daughter and I enjoyed a very good one on our trip to Chattanooga, and we were in serious need of a recharge when we came to it. We had visited the Creative Discovery Museum with our friends from The Boys Made Me Do It, and completely wore out the baby. This was our third or fourth visit to this children’s museum, and it is great fun seeing the baby grow up and explore new areas of it.

The museum opened in 1995 and is a great place for children up to about age ten, but one of the neatest things about it for regular visitors is watching how children interact with exhibits as they get older. The baby has aged out of the infant play area, where we had so much fun playing with blocks and rolling around, and wants to spend most of his time in the under-fours room. This isn’t the biggest of rooms, but there is ample space for the daddies to get down on the floor with kids while the mommies hold coats and talk about child-raising, or possibly the other way around in other groups. There is a train table, a play house, a workshop and a car to “drive,” and a couple of quiet little mouse holes where overstimulated toddlers can hide away with books, and where daddies can contort themselves into pretzels in order to squeeze into the hole and read to them. Both little boys had a lot of fun. 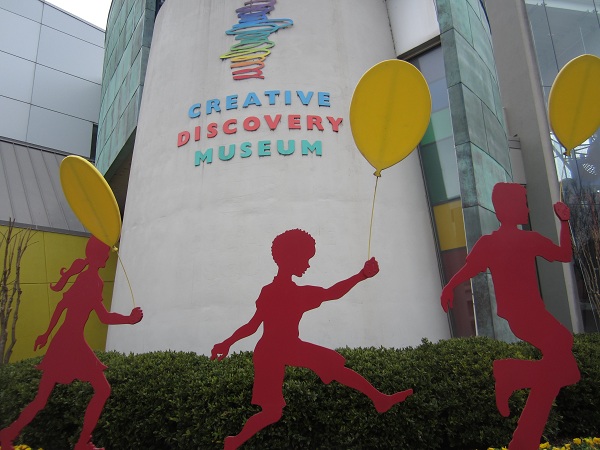 Eventually, the adults decided that we’d had enough of this room and so we shooed the children out to look at the rest of the museum. They still had lots of fun, but most of what we saw was above their heads. The baby didn’t know what to make of a plasma lamp in the science area for older kids. It was almost like he didn’t see any of the colored lights in the globe at all, and didn’t understand why we were putting his hands on it. In other rooms, we think that there is just so much to do that it is sensory overload for children his age. He seems to like banging his instruments together at home and making music, but he is so spoiled for choice with the instruments available here that he has more fun running around and dancing.

Outside of the dedicated small kids’ play area, the children had the most fun in the traveling exhibit, “Dinosaurs: Land of Fire and Ice.” We had actually glimpsed this exhibit in May of last year, when it was at the Children’s Museum of Memphis, but our baby was far too small then to interact with it. He’s almost two and is at the perfect age to start playing with it. Grant notes that most traveling exhibits seem to be geared toward older kids, but this one is perfect for twos (or near-twos) to start, and ours really loved it. None of the dinosaurs are frightening, and they are safe for toddlers to climb on with a little grown-up help. There are slides and several dino eggs, unwieldy but manageable, which the smaller kids tried shuttling around from nest to nest. Older children will probably enjoy the “research station,” which includes a pit to try a paleontology dig, and lots of facts to absorb. It is a wonderful exhibit for children aged two to nine, and it is appearing at CDM through May 12.

We stayed until the toddler started winding down, and we thought that he’d collapse in the car. Grant had already made plans to go for a snack before we went to McKay, but Cara told us that a new restaurant called Community Pie has a gelato bar that everybody in Chattanooga loves. This is the new restaurant from Mike and Taylor Monen, who are well-known in the city for their popular restaurants Taco Mamacita and Urban Stack, both of which we enjoyed. It is also apparently the first place in Chattanooga to get a Neopolitan-style pizza, but we weren’t there to try that. The pizza shop is providing a temporary home to the Monens’ fourth venture, Milk and Honey, a gelato shop that is planned to open today (!) in its own space on Market Street, but will continue to provide gelato for the Monens’ other restaurants.

We thanked our friends for a fun afternoon and made our way back to the parking deck, thinking that the baby might fall asleep in the car and that Grant might stay with him while the girlchild and I went in for take-out, but nothing went quite right. We were somewhat surprised to see a full marching band and majorette line from Brainerd High School in front of the restaurant, and a huge crowd surrounding what seemed to be a trophy presentation. This crowd took up all the available street parking around the restaurant, and so we planned for Grant to drop us off and circle a few times while we rushed in. Somehow Grant then found a parking spot right across the street to lurk and watch the baby while we were inside. I snapped a few photos of the chaos with the restaurant dimly visible between the moving crowds, thinking there might be no other chance to catch the exterior, but as the hordes moved away while we waited for the order to be served, we were able to get a decent picture after all. Nevertheless, it was amusing to see the big brass instruments and the girls in their glittery outfits, even if I did have a little tiny did-too-much-today headache.

It took a little while for the orders to be made up, probably because of all the activity. We had a chance to chat a bit with the wait staff, who were extremely helpful and polite. They explained that the flavors, although currently (and disappointingly) out of sight behind the bar, would soon be displayed in a nice glass case where they can be admired appropriately. I was able to catch a brief glimpse while they made up the scoops for our take-out order. 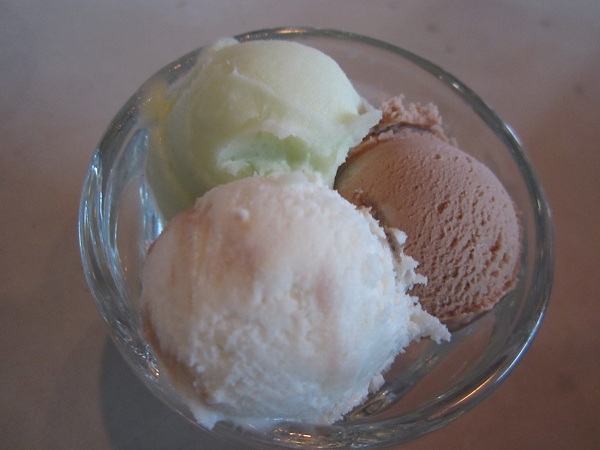 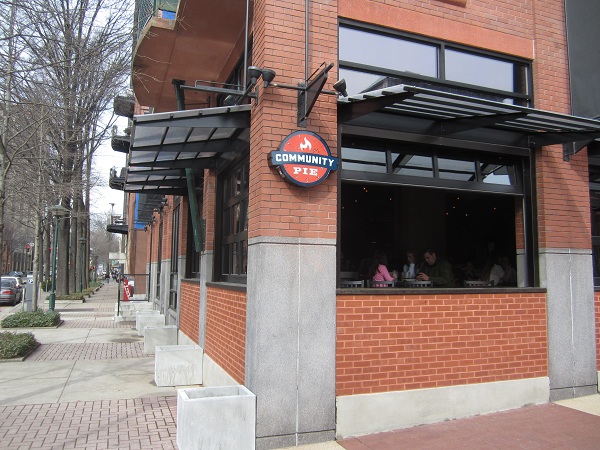 One of the neat things they will do is pull a few flakes of each flavor into a pretty bowl to help diners decide which they want to get, and I asked to snap a photo of that (since the scoops in our to-go containers were disappointingly UN-pretty) and the server was kind enough to make this lovely arrangement instead. Is is not tempting? I no longer remember what the brown flavor in the samples picture was – the flavors apparently change, and it was chocolate something (coffee, perhaps?) but the green was green tea, and the white was the milk and honey.

Grant was planning ahead to his own snack, but he had a few spoonfuls of ours. The girlchild chose stracciatella, which is inevitable if the option exists, and also lavender and honey. As she is one who has had a long and loving relationship with the stracciatella flavor, pay attention when she says that they were both equally good and she didn’t have a favorite. I had their famous milk and honey and the pear. The baby, who was nowhere close to falling asleep and worried by our absence, liked both my flavors in apparently equal measure, so he wound up getting most of the pear. It was by no means bad; I would have been perfectly happy with it if it hadn’t been for the competition. The milk and honey is deservedly famous. You need to go get some if you are anywhere in the general vicinity of the place.