The second best move that the good people at Pure Sodaworks have made lately has been the employment of a young fellow whom our girlchild finds radiant and dreamy. I’m not sure what the fellow’s name is, but he sure does keep the girlchild excited to go to Tennessee.

The very best move that they’ve made, however, is making their long-awaited move into bottling. Since we discovered Pure last summer – astonishingly, for perhaps the only time in any of our lives, those sidebar ads on Facebook proved worth a darn – we have swung by their storefront on Chattanooga’s North Shore at Coolidge Park, or at their Sunday setup in the municipal farmers’ market, for a pair of mugs whenever we can. They have the wonderful deal of a $5 plastic mug with dollar refills, allowing people the chance to try several of their wonderful and tasty concoctions at a low price. Now, to be fair and honest, I personally don’t care for their root beer, and feel that it lacks body, but that doesn’t matter when every one of their other sodas should go on anybody’s list of favorite soft drinks, anywhere.

This past November, the bottling operation that they’d dreamed about finally rolled out, and we timed things right, at last, to pop by Chattanooga at a convenient time to try some more of their from-the-pump fountain drinks and also buy a few bottles. We pulled into the Coolidge parking lot just before they opened their storefront at eleven, allowing us the chance to taste a few mini cupcakes from Baked in Chattanooga (formerly Whipped Cupcakes) and then fill our mugs. After a few minutes, they were open and we were thirsty. Now, if I’m counting right, Pure seems to have about thirteen flavors in their lineup, some of which are seasonally available. There are perhaps eight or nine available from their fountain at any given time. We still haven’t timed a visit right to sample their White Muscadine yet, but we’re hopeful. This time out, we started with Strawberry Jalapeno and Apple Pie. I remember raising an eyebrow about whether I really wanted to try Strawberry Jalapeno on that first visit last July and declined. What a fool decision that was. Apple Pie had previously been my favorite, but this stuff, with just the perfectly blended suggestion of spiciness, is even better, and downright amazing. 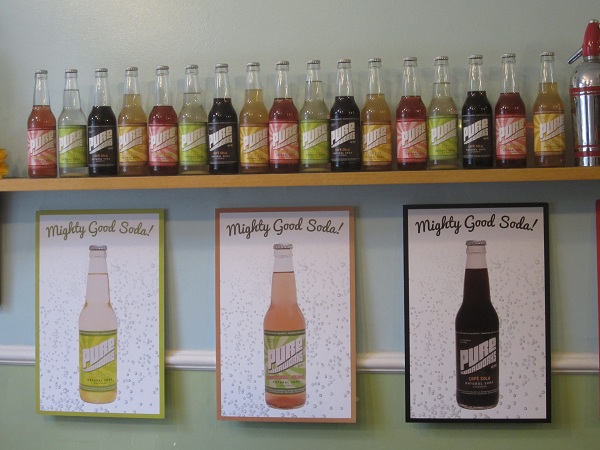 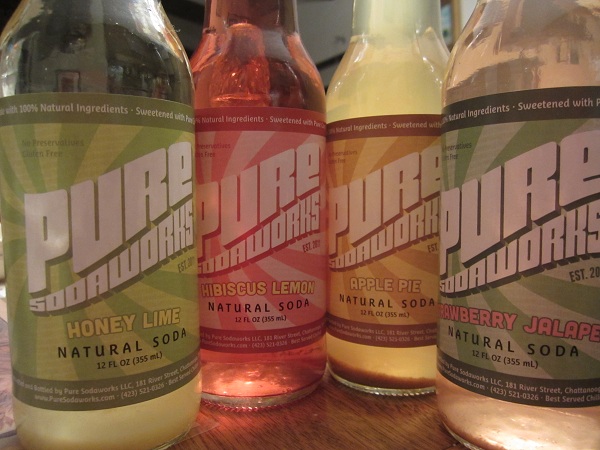 They’ve chosen six of their flavors to launch the bottled line: Strawberry Jalapeno, Root Beer # 4, Apple Pie, Hibiscus Lemon, Honey Lime, and Cafe Cola. As we enjoyed our refills and thought about what we might pick up later in the day to take home, Pure’s co-owner Matt Rogers told us that the bottles were doing pretty well, and are sold not only at all three locations of Mojo Burrito, which we love, but also at all four Lupi’s Pizza Pies, where we were heading next. So while we typically don’t order sodas in restaurants, Marie was happy to have a bottle of Hibiscus Lemon on this occasion. She really enjoyed it, and we love that Lupi’s is carrying their drinks.

A few hours later, we drove back across the bridge, and picked up a mug of Cafe Cola to have with my snack – see the next chapter – and I enjoyed that a great deal, too. There are an awful lot of cola drinks out there, and Pure’s Cafe Cola is in the upper tier. We sipped on some more drinks, including the yummy Lemon Creme, when we stopped a third time on the way back, this time picking up a four-pack of bottles. They’ll let you mix and match your perfect take-home pack here, priced competitively at $2 a bottle, $7 for four, or $10 for six. Their commitment to natural flavors and ingredients is listed right there on the label. The Honey Lime, for instance, contains sparkling water, honey, pure cane sugar, lime juice, and citric acid. Nothing more. This does leave a little sediment in the bottom of each bottle, since they use real ingredients and not flavored oils, but it’s nothing that a gentle swirl won’t mix just perfectly before you pop the top.

Friends and readers, if we haven’t made it clear enough over the years of posting, Chattanooga should definitely be a destination city for all y’all, and not just the town you blow through on your way up Interstates 75 or 24 for more glittery places. There’s a heck of a lot of good restaurants in this city, and plenty more that we haven’t visited, including some other promising-sounding places that carry Pure, like Sluggo’s Vegetarian Café and the Fork and Pie Bar. We’d like to give a big public thanks to the places in Chattanooga that support their homegrown soda company this way. The team at Pure – they call themselves “jerks,” but they’re just so darn nice that it feels wrong every time I try – have accomplished what the city’s Double Cola, which, you’ll recall, I also like a lot, have completely failed to do, and that’s get their product in front of people. The next time that you’re enjoying a meal in the Scenic City, definitely ask for Pure!

One thought on “Pure Sodaworks in Bottles”