No city has generated as many suggestions from our readers and friends as Chattanooga has, and on this most recent trip, I wanted to be sure to visit one of them. It’s actually a place that an acquaintance from the Roadfood.com message boards, “Littleman,” first suggested a couple of years ago, but we’ve also got emails from three different people assuring us that it fits our sensibilities just perfectly. Longtime readers with long memories may recall that “Littleman” has pointed us in the right directions several times before (we have him to thank for Green Acres and The Little Dooey, among others), and he’s still batting a thousand. Everybody has told us that we needed to try the shrimp and the onion rings, and here they are, printed right on front of the menu: “World Famous Jumbo Shrimp and Onion Rings.”

Nikki’s Drive Inn opened in 1941, up the North Shore road, Cherokee, and just south of the Stringer’s Ridge Tunnel. I suppose you could start a semantic argument that it’s more of a “diner” than a “drive-in.” It doesn’t have a canopy or curb service, and the interior is done up with a classic low counter and stools on one side surrounding the cooking area, with booths for families and larger groups and signs admonishing people who put their feet in the seats, but I feel the distinction is important. Then again, it’s possible that the term “drive inn” predates curb service and canopies in this region, anyway. My mother grew up fifty miles down the road in Fort Payne, and she says that what we think of today as “restaurants” were, in the late 1950s and 1960s, all called either “cafes” or “drive inns” in her community. Not, she clarifies, that there were very many of them. 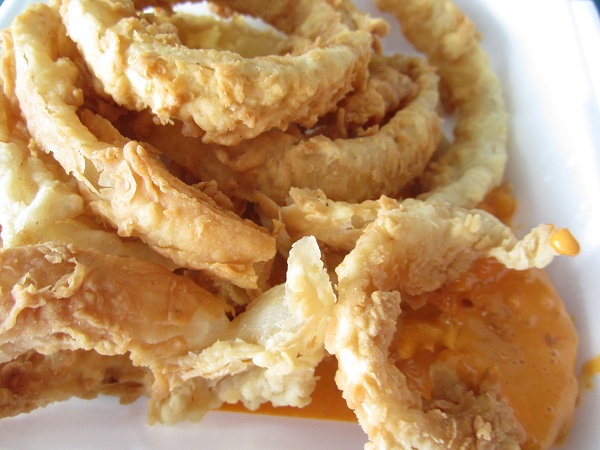 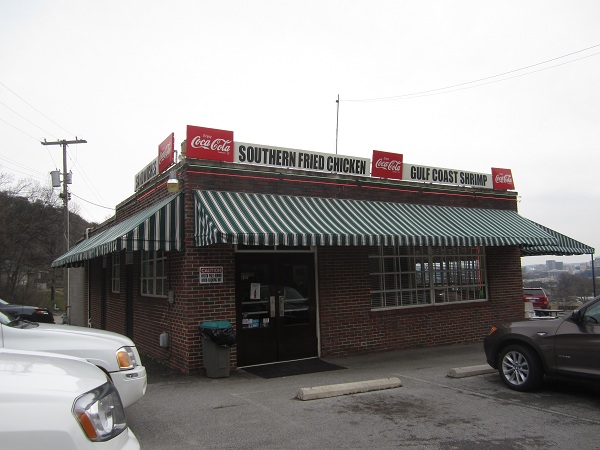 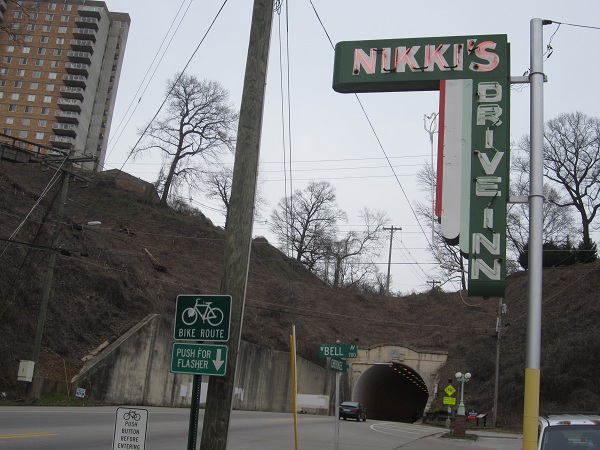 Now, I do want to note for budgeting travelers like us that the house specialties probably cost a little more than the old-fashioned exterior might suggest. The half-dozen shrimp plate, served with a salad, fries and a hush puppy, is $13.25. Onion rings are $3.60 more. I decided to save on cash and calories and ordered the rings and four shrimp for $1.95 each. I also ate at one of the tables outside, where we were buffeted by the wind, but where it was a little less obvious that, rudely, we had brought drinks along from Pure down the road. But honestly, who wouldn’t rather have a dollar mug of excellent Cafe Cola over a more expensive, and inferior, Coke?

I’m going to trust that June Jones, who has owned Nikki’s for something like thirty years, won’t object too much to my tackiness, because I’m going to tell all our readers that these onion rings were easily among the best that we have had, anywhere, and that these gigantic shrimp, served with a homemade cocktail sauce, were also pretty wonderful. An order of onion rings is enough for three to share, even if one of the three is a baby who can’t decide for certain whether he likes them.

I really loved my time indoors, talking with the counter staff, while waiting for my food. These are good people who seem to enjoy their jobs and know that people are coming from miles away to try their shrimp and onion rings. Even in the middle of the afternoon, this place was close to full and people were having a good time. I was encouraged to give a good squeeze of their tangy orange sauce into my carry-out box of rings before stepping outside, because the sauce is said to make the rings even better. Well, maybe and maybe not, because these rings make a perfect snack either way.

After we ate, we drove through the Stringer’s Ridge tunnel – I really, really do love tunnels – and then turned around to make our last stop at Pure for the day. From there, we went to McKay for an astonishingly long two hour-plus visit, as Marie had four full boxes of books to sell. We seemed to get better gas mileage after all that weight was out of the car, and then found our way back to Georgia for some supper. More on that in the next chapter.

Other blog posts about Nikki’s: