We made a couple of final stops in northwest Georgia on our way back from Chattanooga. We had an excellent day trip to the Scenic City, ate well, visited friends, and shopped well, but the day had grown a little longer than we had anticipated, and the baby refused to nap. He finally zonked out as we crossed back into Georgia, and when we pulled off just a couple of exits later for an early supper, we didn’t want to wake him. Marie suggested that the girlchild and I go get something to eat while she kicked back with a book and the sleeping baby, and just bring her a sandwich.

Regular vistors may remember that back in the fall, we made a long-overdue day trip to Cloudland Canyon and intended to visit four barbecue joints on that day, but our plans got changed and we only went to two. The intended fourth of those places has since shut down! It was called Spacehog’s and was in Fort Oglethorpe. I learned this unfortunate news as I was looking around Urbanspoon Dalton for directions. One thing’s for certain: northwest Georgia is still very badly undersampled by bloggers. Regular visitors are probably also a little weary of me pointing this out, but I sure do wish that we could get even a quarter of the people who’ve written about Fox Brothers or Bone Lick in Atlanta to head up into the mountains and explore with me.

Bailey’s has been doing huge business in its present location for about ten years. The restaurant originally opened in the nearby town of Talking Rock in the late 1960s, but the building was destroyed by fire in the spring of 2002. It was thought of, then, as one of Catoosa County’s landmark eateries, and the community goodwill that they’d built helped them quickly reopen a few miles north. These days, Tony Bailey and his brother-in-law Scott run the restaurant. Tony’s mother Jane originally opened it with her husband Preston Bailey Jr. They cook their pork shoulders overnight atop hickory wood, and serve it chopped. 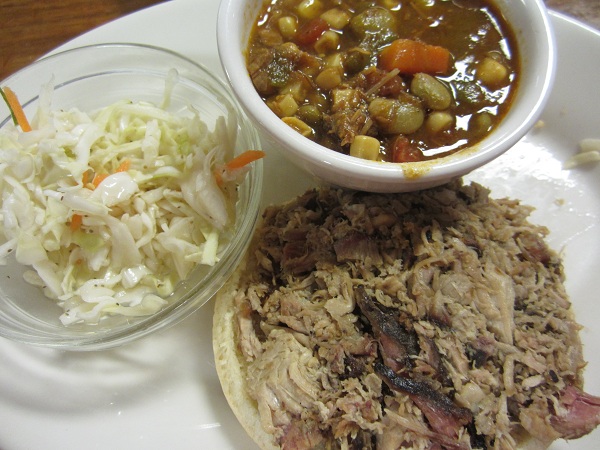 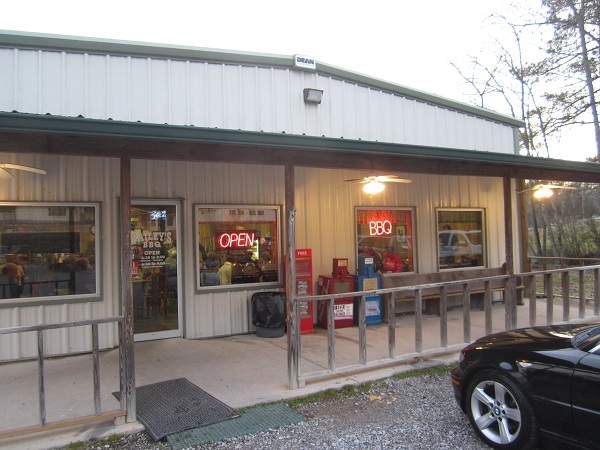 Like a lot of its local kin, Bailey’s has a much larger menu than barbecue, including breakfasts and hamburgers and meat-and-three lunch plates and that omnipresent southern roadfood dish, hamburger steak with grilled onions, but most of the people in this nearly-full barn at five-something on a Saturday evening seemed to be having chopped pork or beef like the girlchild and I had. They also offer ribs, but only on Wednesdays and Fridays.

Sandwiches are served with either mayo-based cole slaw or a much sharper vinegar slaw. The girlchild has been disliking slaw lately – this might not be her mercurial teenage weirdness, either, as it’s lasted a good long while – and declined any, but asked for some tater tots on the side. I suppose that she must have been missing her middle school lunchroom or something. I had the vinegar slaw, which was awesome, and some really curious Brunswick stew. Packed with lima beans and carrots, this was like vegetable soup with some meat in it, and it was served with oyster crackers, which might be a first. Once in a while, you’ll run into a Georgia barbecue joint that will give you saltines, but I really don’t know that I’ve ever seen oyster crackers served with stew. The sauces are thick red tomato-based, both a mild and a hot. The hot was not particularly lethal, and went very well with the meat. We enjoyed our barbecue very much, took Marie a sandwich that she also enjoyed (no slaw, mild sauce), and thanked our hostess for a satisfactory meal. Not extraordinary, but a fine time kicked back in what is clearly a popular local spot with lots of regular guests.

Well, a drive from Chattanooga to Atlanta wouldn’t be quite complete for Marie without her guilty pleasure, a grape slush from Sonic. Rather than stopping at another interstate exit seventeen miles down the road in Dalton, we just drove a few miles west out Battlefield Parkway to Fort Oglethorpe, where one is located across the street from a public school. We got slushes and ice cream and caught every stinkin’ traffic light along the way. We were shooting to get home a little after seven, but it was more like 8.15. Not a bad little day trip, really!