Our circumnavigation series – this will be the third – have slowly evolved over the last eighteen months, and it occurs to me that while I’ve been doing a lot of thinking about these, I have not really communicated to our readers what the purpose and objective to them might be. I mean, what the heck is this all about? Why do I leave my wife and kids for two days to go out and absolutely overeat in strange and out-of-the-way places?

Well, the clearest answer is that I’ve read with some envy the work of the writers who’ve preceded us in this hobby – Trillin, Edge, the Sterns – and wanted to attempt to replicate the sort of experiences that they’ve enjoyed. However, I’m on a much tighter budget and have no expense account. The circumnavigations are designed by necessity to be done on the cheap. They’re financed through our advertising, both at this site and over at my Google-hosted book review blogs, which pay via ad clicks. (Incidentally, Google’s click program pays more overall, I must say, than WordPress does, which pays for views. Marie, Let’s Eat! has nearly seven times more of an audience than the Google blogs, and so we did take a small financial stumble by leaving Blogspot last year. Still, we can generally cross our fingers for a local splurge every four months, followed by a circumnavigation four months after that.)

I think that this has been my most successful trip yet both in terms of finding great food at interesting places and having a wonderful and invigorating experience, and also bringing back new content for our readers about places that have not been well-documented by other hobbyists and writers. I learned a lot and got some great stories and put other things that I’ve previously learned and seen in a fresh context. Unfortunately, with only two days and about $250, there’s a limit to how much that I can see and do, and how much time that I can spend at each business talking to the staff and the regulars before rushing off, but I genuinely believe that a little anecdote and a couple of photos are a start. Sure, some of the places that I have visited have already been covered, and in some cases quite well, but many others have only a decades-old, yellowing newspaper story to their name, if anything. I’d like to capture at least a little bit about a lot of places. Perhaps the road might take me back to some of these areas for longer stays down the line, or perhaps my writing might inspire some newer, younger, hobbyist or blogger or newspaper writer to go out and tell a restaurant’s story in longer, loving detail.

That said, I kind of like the format, despite the admittedly flawed nature. Even if our ad money were to increase, or some kind patron were to offer us a donation, I might not do things all that differently. Maybe increase from an 800-mile round trip to 900 or a thousand over three days, and give myself an hour at each stop instead of forty minutes, but I really like just heading out by myself and blazing down an old two-lane with the windows down and the music loud, looking for a barbecue shack that somebody told me was at the top of the next hill. I’ll leave the oral histories to somebody at the SFA who’s been trained to know what the heck she’s doing.

For example, at Chattanooga’s Rib & Loin, a gigantic long barn of a place that Paul Plumlee and Yogi Center opened in 1989, I didn’t even speak to either of these good fellows, but just a couple of congenial and professional servers who didn’t know much about barbecue or their business’s history. One of them did tell me that she prefers the chopped pork to the ribs, and so I violated my tradition of ordering ribs in a joint with the word “rib” in the name. I had her word and I could save a possibly vital $2.50. That might seem petty and miserly, but allow me this. I had fourteen additional restaurants to sample. Pinching that many pennies here might help me punch the air and announce that I was on time and under budget when I get home. 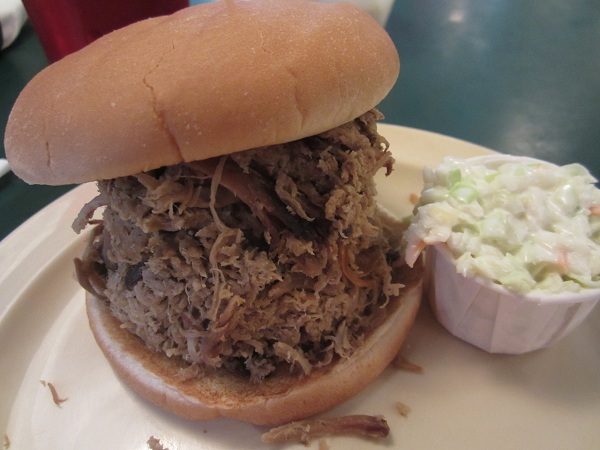 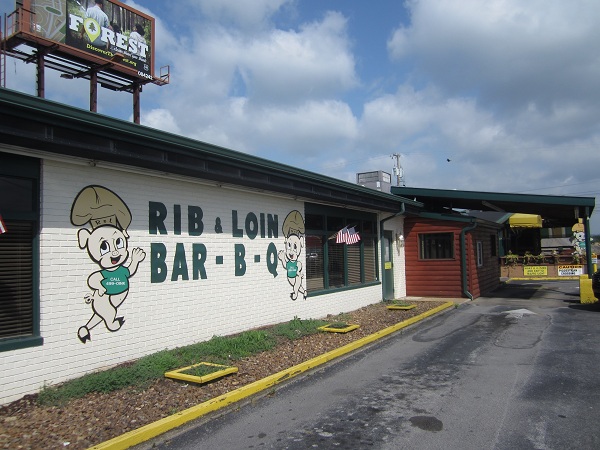 Now, one flaw in my “methodology” when making these excursions is that since I have so much ground to cover in such a short time, stop number one is, by necessity, the place that I can find that opens for lunch earliest. Rib & Loin got the nod because they open between 10 and 10.30 for lunch, meaning I could get into Central Standard Time that much sooner. Another flaw is that I don’t have time to stop and document something wonderful that is located right next door to this place. There is a family fun center called Sir Goony’s, full of dinosaurs and jungle animals and Muffler Men, right next door, but it had not opened by the time I finished my meal and was ready to race away. We blew past this on one of our previous visits to Chattanooga, and this time I could at least pause by the chain link fence and look, longingly, at the critters and creations, vowing that the next time the road takes us to the Scenic City, we are definitely coming here for a Photo Post.

But before I started looking at concrete dragons and octopi, I was enjoying some really good chopped pork at Rib & Loin. Like a few other places in this region, it is smoky and dry and hacked into quite thin shreds. It has a similar flavor to, for example, Bailey’s and Thatcher’s, and while the meat tastes good alone, it also does need some sauce for the best effect.

For my taste, the regular brown sauce was too sweet to complement the meat perfectly, but the hotter sauce was just right. This is one you have to ask for. On the table, there’s a clear squeeze bottle of the brown sauce, and an unlabeled red squeeze bottle. If you’ve been to many more than about three barbecue places, you know that this could be either ketchup or hot sauce. I learned long ago to just squeeze a few drops onto the plate to check. My server spotted me lifting that bottle near my sandwich, and, while my head was turned away from her, I’d like to think that she did a slow-motion “Nooooo!” just before she shouted “Oh! Sir! Sir! That’s ketchup!” Good service, that.

I paid and went back to the table for my book, during which time the cashier moved off to some other task, getting the huge building ready for the transition between “open early enough to satisfy oddballs who want a meal at ten” and “business lunch rush.” Nobody was around to ask about the funny photograph of four attractive, older ladies smiling together and sharing drinks. It was captioned “Yogi’s Ex-Wives.” I’m sure that’s just a good-natured gag at the co-owner’s expense, but really, you meet some characters in this business. Could be, you know?

Other blog posts about Rib & Loin:

8 thoughts on “Circumnavigating the Tennessee River Valley – part one”