Our June trip to Chattanooga was not on a very hot day, but after we ate at Zarzour’s, we cooled off anyway, with a trip to Coolidge Park to play in the fountain. Our son got good and drenched and had a terrific time. After about an hour of that, we drove north to Red Bank to visit Dub’s Place once again and dig into one of their “crumble burgers.” (We just updated that original post with a few lines and pictures rather than writing a new post, so check that out!)

Then we drove over to McKay, a better used bookstore than any in Georgia, and sold some books and DVDs and, after a while, the girlchild was returned to us, at long last. It had been a long two weeks for us. I’m not sure why we miss this kid so much when she’s gone. Reckon we must love her or something.

The girlchild said that she was hungry, and I said that was a good thing, because we were headed up to Hixson to get some barbecue at Rib & Loin, whose second location opened here in the late 1990s. I had visited the original location, on Brainerd, two years previously, and I mentioned then that I should have tried the ribs, what with “rib” being in the restaurant’s name and all, but I still didn’t do it this time around. I wanted to try their chopped pork again. There are a few more barbecue places in Chattanooga that we’ll visit, either for the first time or for a follow-up, before we make our way back to Rib & Loin, but when we do, I’m definitely going to get the ribs. I’ve really no excuse anymore, honestly. 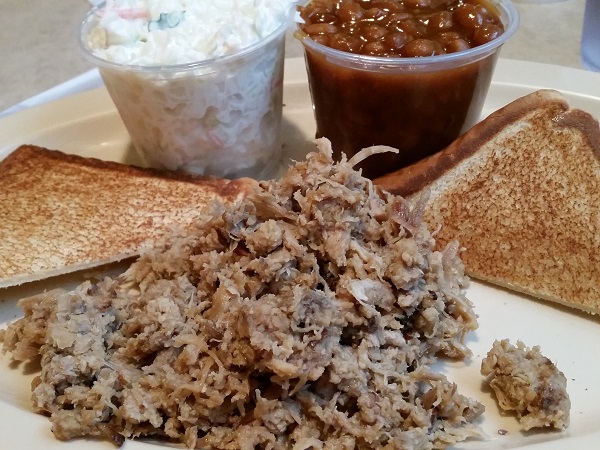 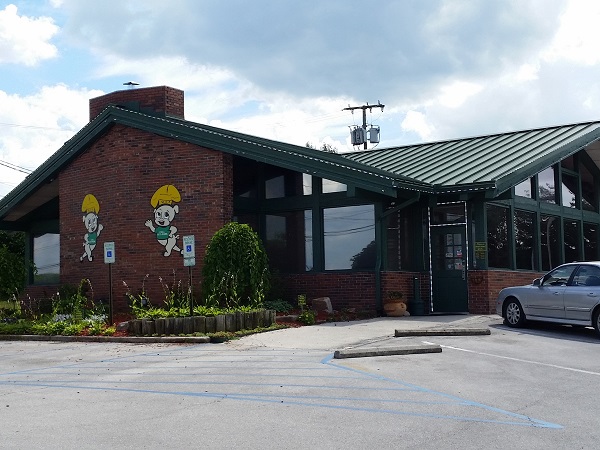 Our daughter remains crazy about stuffed baked potatoes, and our son is absolutely unpredictable when it comes to barbecue. He was quite tired from all the playing, and on a sugar high from the ice cream at Dub’s, so we had to ask our server for a little extra time to nail down what he wanted. Eventually we just settled on some fries and some of my baked beans for him.

The pork here is very finely chopped, and it is smoky but quite dry. I enjoyed the texture and the flavor, but felt that it needed some of the sauce, but not too much. The sauce on the table is a standard, thick, brown sweet and sticky sauce like most places in the region offer. Be sure to ask for their hotter sauce instead. It’s not too spicy, but it has enough of a kick to be memorable. The slaw goes really well with this type of flavor in the meat. It’s not a very sweet slaw at all, so I tried a few bites of slaw and pork with a dab of sweet sauce on bread, and that was very tasty.

The server, sadly, was not really able to answer any of our questions, including how the pork is prepared, and how long this location has been operating. (It appears to be a former Ryan’s, and opened in 1998 or so.) We thanked her from the bottom of our hearts anyway for putting up with our indecisive and really cranky kid. Somehow, he didn’t fall asleep on the way back to Atlanta, either!