Our planned tour of northwestern Georgia barbecue only managed half of the planned number of restaurants, although it is likely that we visited the most northwestern barbecue restaurant in the state. I would happily be proven wrong, but I can’t find evidence that there are any closer to the corner than Thatcher’s in Trenton. This town, located about six miles from both the Alabama and Tennessee lines, is the county seat of what I still call the Free State of Dade.

Boring historians, following the lead of the long dead white supremacist E. Merton Coulter, have tried to squash the fun out of the story that Dade County formally seceded from Georgia several weeks before Georgia seceded from the Union in 1861, but it has been local and family legend for decades that the proud and isolated community did so. Coulter held terrible, indefensible opinions, but, grudgingly, one must accept that he did his job as a historian excellently. I read him in college, and remember his work well, if not with pleasure.

By road, Dade was completely inaccessible from any place in Georgia until the late 1930s; prior to this, anybody wishing to transport goods or cargo into or out of Dade had to go through a neighboring state. A small, ceremonial reunification with Georgia and with the federal government was not held until World War Two.

While Dade doesn’t get a lot of media attention, and not a great many food blogger visits*, their fiercely independent and outsider streak continues today. I was surprised to see the old state flag – you know, the one with the Confederate stripes – flying from a flagpole in what looked like a city park. Turns out, according to Wikipedia, that Trenton adopted the retired state colors as their official city flag after our former governor, Roy Barnes, pushed through the change. Political scientists and dabblers don’t often recognize that “the Barnes betrayal” is one of the major factors that turned this once-blue state solid red; thousands of lifelong Democrats abandoned the party permanently after Barnes had the colors replaced by that hideous blue thing that we had for a few months. You remember that flag? It looked like a Denny’s placemat.

So anyway, we left Cloudland Canyon a few hours later than I thought we might, and drove west down the unbelievably steep slope of GA-136 into Trenton. We found Thatcher’s, which opened in 2009, on a side street within sight of the traffic on I-59, and settled in for a terrific meal. 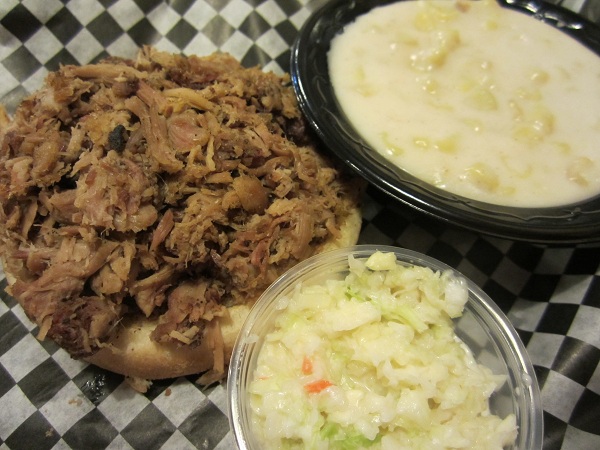 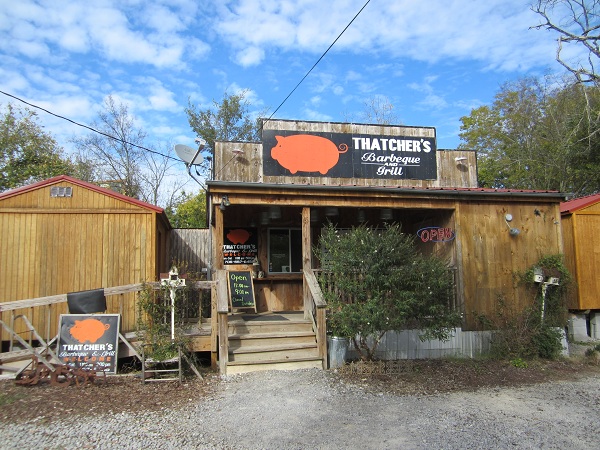 If you pop over to our barbecue page, you’ll see that we’re closing in on 200 barbecue joints visited. I can therefore say, with some evidentiary weight, that Thatcher’s has one of the most expansive, weird and fun menus that I have ever seen. This is a place that knows it’s smoking some excellent food and has a ball doing so. They’re not content with offering the simple basics of pork, chicken and ribs. This place offers everything from pita pockets to nine different meat-filled baked potatoes to some really odd things that they call “shovels” but which sound a little like amped-up nachos. A Ham What Am Shovel, for instance, is homemade corn chips, smoked ham, melted cheddar, pinto beans and marinated onions.

We just kept it simple and had basic barbecue offerings. The pork is completely delicious and very smoky, and they offer three sauces: mild or spicy varieties of a tomato-based sauce, and a really good mustard sauce. I just had a sandwich, and instead of the Brunswick stew, I decided to order something I’d not heard of before: smoked corn pudding. Not too many miles removed from creamed corn, this was very sweet, made with coconut milk, and delicious.

They also have a long line of dessert puddings. Banana pudding is always available, with others rotating in or out depending on what is in season and what is available. These include pumpkin spice, banana-and-peanut butter, blueberry, strawberry, and blackberry. Our daughter really loved the pumpkin spice, and she had even more sweets to come.

It wasn’t just the late hour that prompted us to abandon the rest of the day’s barbecue plans. There was also that amazing slope between Trenton and the canyon. I wasn’t in a hurry to push our new Mazda’s four measly cylinders up that monster. And, on the other side of the canyon, there was the ten-mile detour in order to get back to Lafayette. So we called it mostly a day and took US-11 north into Chattanooga, picked up the interstate, and drove south to Dalton for what we’d planned as the last visit anyway, a reward for our daughter being so darn excellent. 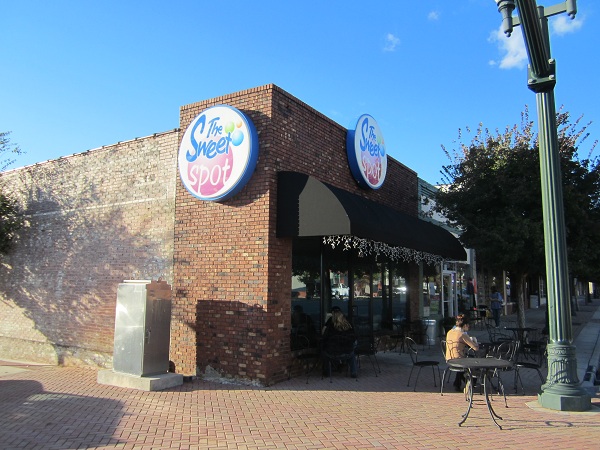 One of Dalton’s popular and nice restaurants is the Oakwood Cafe. Last summer, that restaurant’s owners, Kasey and Julie Carpenter, opened a frozen yogurt shop in a corner space, doing a little bit to help revitalize Dalton’s downtown. Architecturally, it’s a good area, but it needs some more business and more traffic. The weather was pleasant enough that almost all of the Sweet Spot’s guests were sitting outside.

The girlchild really enjoyed her extra treat, and said that she appreciated the even larger selection of toppings and things than she sees in frozen yogurt shops in Atlanta. The Sweet Spot has been a big success for the Carpenters, who quickly followed it with two additional locations in Calhoun and in Cartersville. In fact, we saw the Calhoun store earlier that day, as we left Dub’s on our way to the canyon.

That wrapped up three very busy days of travel and barbecue, following the circumnavigation of South Carolina. In my book, I failed to do northwest Georgia justice for a proper barbecue tour, though I really enjoyed the heck out of the two places we did visit. We may try again one Saturday in late January, perhaps, and stop by four places around Lafayette, Ringold, and Dalton. There’s an awful lot more to see and eat here than most people know!

*The always entertaining Mohaus beat us to Thatcher’s by a couple of weeks on her way up to the canyon, though I’d say we had much prettier foliage. Now, everybody else, head that way!