It didn’t occur to me for several days, but by stopping at this little place, we’re one away from a set of barbecue joints in the four corners of Georgia. Eighteen months ago, we visited Mountain Man in the northeast corner, almost in North Carolina. In the fall, we went to Thatcher’s in Trenton, from which a brisk walk would soon take you to either Tennessee or Alabama. And now we’re on I-95’s southernmost Georgia exit. Going east would take you to St. Mary’s before finding the salt marshes, but there does not appear to be a barbecue restaurant in that town. A quick hop west, however, sees Jack’s BBQ, which, since 2007, has been located in a rustic building across the street from a big truck stop.

Jack Sutton, who finished a long tour of duty in the US Navy stationed at nearby Kings Bay Base and decided to stay in this area, first opened his place in 1992, moving to this location fifteen years later. We stopped by on our way back from Jacksonville, since I had elected to skip lunch at Kickbacks and just have some beer instead, waiting until we returned to Georgia to get some food here. Parked out front is one of the most peculiar amenities that we’ve ever seen at a barbecue restaurant: a golf cart. Mr. Sutton provides delivery to the truck stop, or, his staff told us, they’ll cart across the street and bring somebody who wants to dine with them right to their door.

Sutton has one of those staffs who really like talking about him with a smile and a twinkle in their eye while he’s away. I would never report back on unhappy staffs acting like ugly gossips while the boss is away, you understand. The two ladies working this afternoon, instead, told me it was a shame that I missed him because he’s such a character. They love working for the old guy, who has been happily married for something like fifty years and keeps everyone guessing by changing his mind constantly about what he wants to do. Looking at the empty steam tray setup, I wondered whether they have an evening buffet, but was mistaken. They sometimes have a breakfast buffet, but not often enough to plan for. 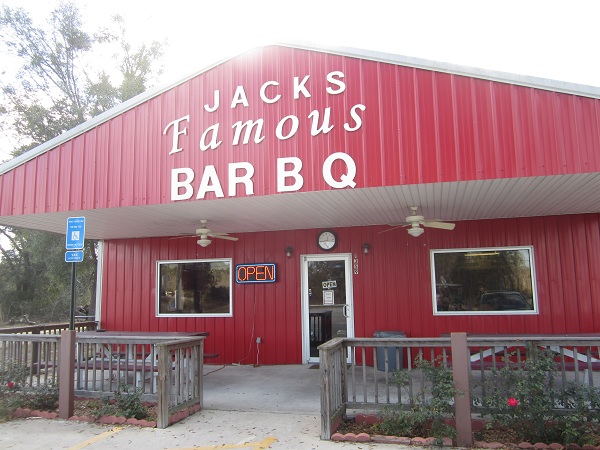 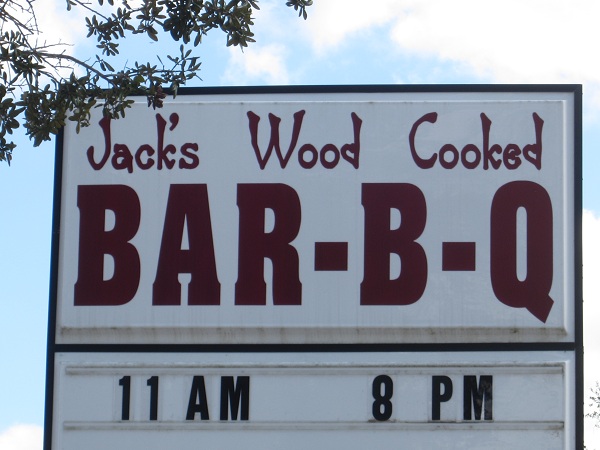 The only thing that doesn’t change at Jack’s are his recipes. He has smoked over live oak since he opened, and guards the recipes to his Brunswick stew and his incredibly curious honey glaze sauce closely. The meat was certainly good, and I was very pleased with this weird sauce. It’s a little like honey mustard with a bit more flair. I regret getting a sandwich to go rather than sitting down with a larger plate so that I could experiment a little more, and get some photos that would have been worth sharing.

Another plus for travelers is that Jack’s offers one of the best deals of any place we’ve visited. The “trucker’s combo” of ribs, pork, and chicken is a big pile of food for only ten bucks. This is definitely a place worth a longer visit, and hopefully we can stop in again one day when Sutton’s around. His employees talked him up so much that I’d rather like to meet the old fellow!

But now we must consider the problem of Georgia’s fourth corner. I have no idea when we could possibly justify a trip to the extreme southwestern corner of our state, but a little research suggests that Sugar Shack Smokehouse in Bainbridge might have the geographic edge on the better-known Boyd’s in the same town. If we ever have reason or extra money to go visit Tallahassee or Dothan, Sugar Shack is only about fifty miles from either city. All we need now is for somebody to convince Florida State University to host a food blogger’s convention and invite us to give the keynote address, and we’re good to go!