Coming back from our trip up to Asheville, I had hoped that we might stop somewhere for a barbecue snack. We were disappointed, after all, to learn that Fiddlin Pig had closed, and a weekend is just incomplete without some barbecue. Of course, traveling on a Sunday through western North Carolina, it’s a little hard to actually find a barbecue restaurant that’s open. It’s not until you’re back in Georgia that you get a few options.

The towns of Dillard and Rabun Gap are much more traveler-friendly. Here, I count three barbecue joints within about four miles of each other, all serving up on Sundays. The first of these that travelers will meet on the way back to Atlanta will be Mountain Man. This might very well be the northernmost barbecue restaurant within Georgia’s boundaries. You can probably lob a tennis ball into North Carolina from here.

This restaurant originally opened, under different ownership, in the 1980s, but it has been run by the Fotopoulus family for almost fifteen years. When they moved down from Chicago, Mountain Man was just one storefront in a small strip mall, but they have grown the business so that various dining rooms line the entire length of the property. Architecturally, it’s a real mish-mash. The food that they serve is just terrific, and a real traveler’s delight. 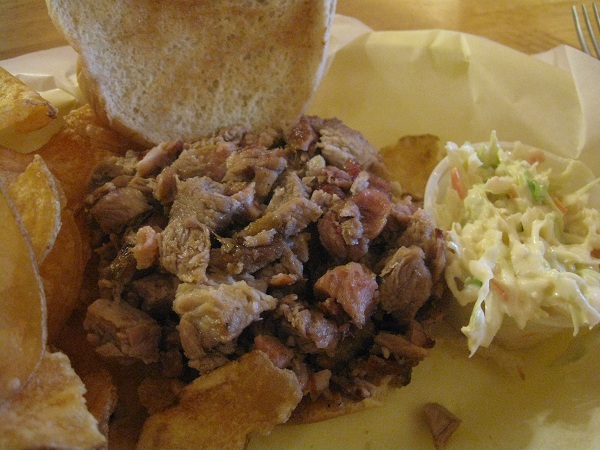 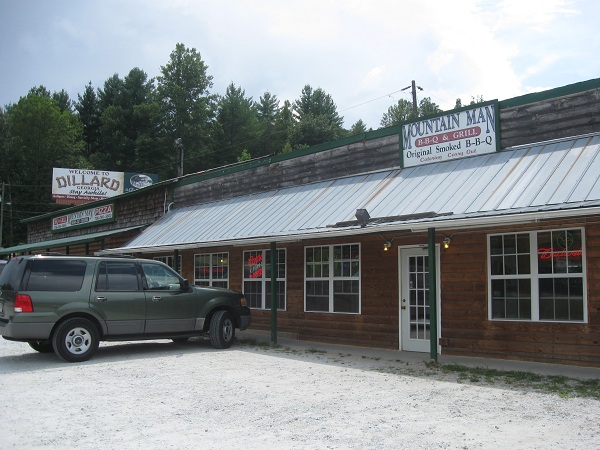 We arrived around 2:30, and the dining room was about a third full. Not bad for a Sunday, I’d say. We kept our orders simple. Marie and I each had chopped pork sandwiches, served with excellent homemade potato chips and, sadly, not-at-all-excellent slaw. Our daughter had a bowl of Brunswick stew, thick with lots of chopped and ground meat. We thought it was pretty good stew, but it was improved by adding some barbecue sauce to the bowl. There are mild and hot varieties of the usual brown ketchup-vinegar mix. The mild was too sweet for my taste; the hot was really good. The pork was nicely smoked and just a little moist. I found it tastier than the justifiably popular stuff available down the road at Oinkers in Clayton.

I was interested to learn that the family started serving Chicago-styled pizza as well. Apparently, they started baking them for the friends that they made when they moved down here, and were persuaded that they should add the pizza to the menu and sell it in the restaurant. The growing success of the restaurant has resulted in a sprawling building with multiple dining rooms and a large menu. Honestly, though, the pizza would have to be pretty amazing to distract me from the barbecue. I can’t deny, however, that I’m awfully curious.