Earlier this year, one of our readers, Bobby C., left us a comment suggesting that the next time that we’re traveling through the Dalton area, we should bring the girlchild by a frozen yogurt place called Jandy’s. We love getting recommendations. Personalized recommendations that are aware of my daughter’s blogname and her favorite foods, well, shucks, we’re thrilled that anybody reads us that closely.

But this trip up I-75 was not looking all that likely to feature a stop in Dalton, because I’d already planned to take the family to Milk & Honey for gelato. On our previous visit to town, we’d sampled their gelato at one of the owners’ sister restaurants, Community Pie, and now that they have assembled a place of their own to sell these little cups of heaven, I knew that Marie and the girlchild would want a stop. But the girlchild surprised me. I told her the day before we left that she could pick her dessert: gelato in Chattanooga or frozen yogurt in Dalton. “Froyo,” she said. “No contest. Froyo.”

Aren’t children the most unpredictable things? 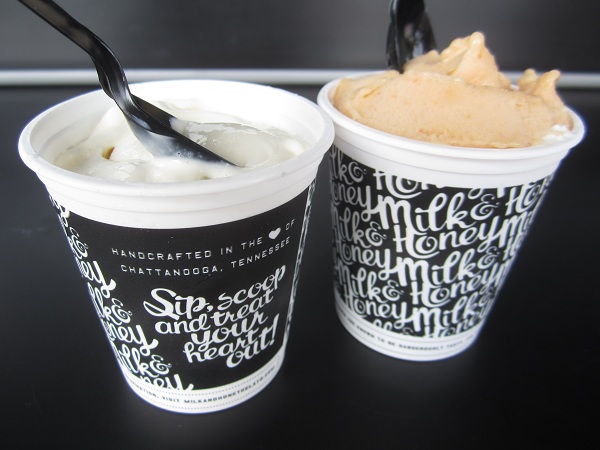 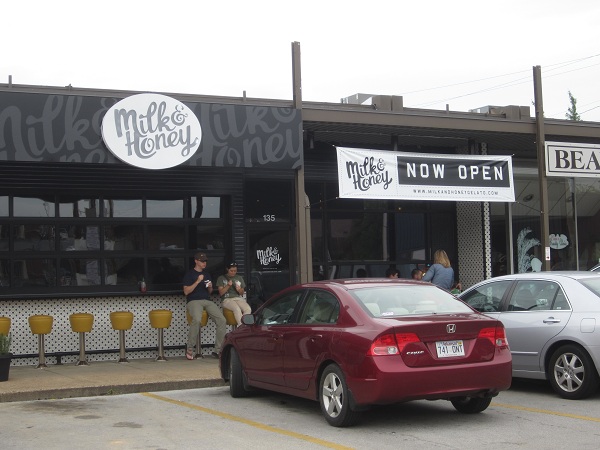 Milk & Honey is in the same once-decaying shopping center that’s home to Taco Mamacita, also owned by Mike and Taylor Monen. I bet the landlords of this place have been dancing a jig for five solid months now that they have actual tenants in two spaces who are bringing in mobs of guests and filling the parking lot. We joined a long afternoon line and resolved ourselves to eating outside in the heat as there were no tables available in the small space. Then again, having big crowds outside always makes a shopping center look more vibrant and attractive to any new prospective tenants, doesn’t it?

While gelato is the main attraction, they also serve lots of local foods and drinks, including coffees and bottles of Pure Soda. They start the mornings off with popular bagels and coffee, and are perfectly located to take advantage of commuters from the North Shore going across the bridge to jobs in downtown Chattanooga, and are close enough to the Frazier Avenue strip to catch pedestrians who are willing to walk an extra block for these wonderful treats.

Gelato cups are under four dollars for three scoops, and guests can mix and match up to three flavors from the nearly twenty on offer at any given time. These change out throughout the day as more is made and sold out, so you can’t necessarily plan ahead for favorites. Marie was thrilled to see chocolate-banana, her favorite flavor mix, while they did not have the toasted marshmallow that I had heard about. She mixed peach, milk and honey, and chocolate-banana, and I went with amaretto and milk and honey, which was so delicate and creamy and wonderful. I could eat that every day, but I find the chocolate here far too rich for my taste. The baby happily shared our treats, and after I teased the girlchild – “No, you can’t have a bite, you said that you wanted frozen yogurt” – we even shared with her, too.

We stopped by Pure’s storefront to bring home some bottles of Apple Pie, Strawberry Jalapeno, and Cafe Cola for later, and then visited the Sir Goony’s mini-golf seen in the previous chapter, and got on I-75 to take the girlchild to her treat. 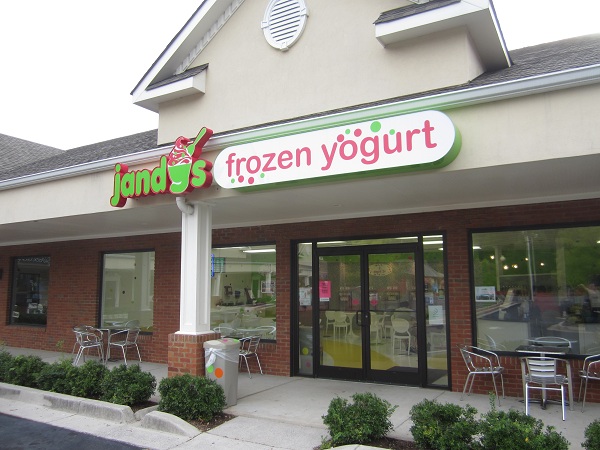 Well, if you hadn’t figured it out by now, neither Marie nor I really care for the taste of frozen yogurt, but the girlchild will happily go to freaking town making herself a gigantic mess of a bowl of this stuff. Jandy’s certainly got the girlchild’s seal of approval. She mixed heaven knows how many flavors, then poured an inhuman number of toppings, none of which could possibly complement each other unless you’re a teenager, over them, and then she and the baby devoured the mess. She loved it, and said it was every bit as good as Dalton’s Sweet Spot, which we visited last year.

Jandy’s is growing in the same footprint as The Sweet Spot, incidentally. Jandy’s has three locations, in Dalton, Calhoun, and in Rome, and one of their employees told us that they’re planning for a fourth in Cartersville soon. Interesting how Atlanta reached a saturation point with frozen yogurt last year, leading to so many local stores closing, but here in the smaller towns, the concept seems to be growing. Personally, if I had to get off at this exit, I’d rather drive down the road a few miles and get a sundae at Ice Castle, but then again, if I had the choice, until the city of Dalton manages the blasted traffic lights at this exit so that drivers are not stopped by every single stinking red light on Walnut, I’d really rather not get off at this exit at all!

3 thoughts on “Gelato in Chattanooga and Froyo in Dalton”