So, onto day two of the road trip. I call these “circumnavigations,” although, geographically, that wasn’t really accurate this time. Another big change on this go-round was that I stayed in a decent hotel for once. The last two trips that I took (around the Tennessee River Valley and around central North Carolina) saw me staying in two of the absolute worst motels I’d ever visited, and this time, I resolved to stay somewhere decent. So as I relaxed in the quite nice Best Western in Goldsboro, I looked over the next day’s driving and reread a few reviews of the next day’s eating and realized I’d made a mistake in my itinerary.

I had originally planned to start the day in Ayden at 11 am, then drive north to Greenville, then south to Dudley, and, from there, home. But B’s Barbecue in Greenville was said to open at 10, and it would make much more sense to start there; it would shave a huge amount of time from the trip, get me to Columbia in time to photograph a restaurant there in the daylight, and home in time for the 11pm repeat of the Doctor Who season finale.

I left the hotel about 8, stopped by Wilber’s to take some pictures, and then moseyed along old farm lanes to Greenville at a very leisurely pace, arriving around 9.20 to find the very pleasant surprise that they actually open at 9 in the morning! I had figured to just sit in my car with a book until they were ready, but locals, among them East Carolina students who eat amazingly well, were already taking their places inside and carrying out food. They weren’t tailgating – the Pirates had a bye week – but B’s, which has a road named after it!, does a heck of a lot of tailgating business. And why not? This is exactly the sort of barbecue joint that you discover as an undergraduate and return to visit for decades to come. 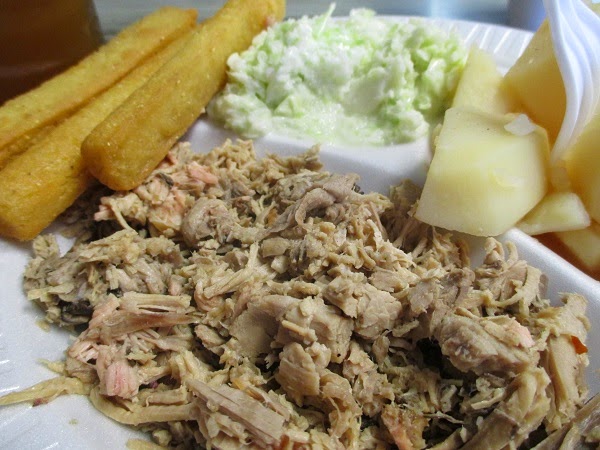 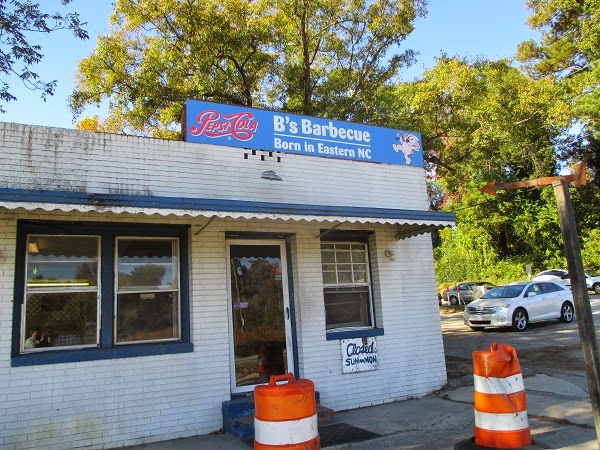 In point of fact, the meat here is astonishingly similar in taste and texture to the meat at Paul’s in Lexington GA, which I discovered as an undergraduate myself and have revisited more than forty times. It is incredibly tender and moist, absolutely delicious in every way. The sauce is a thin vinegar-based one with some pepper (shake, of course, for extra heat) and not quite like Paul’s, which is somewhat like a Lexington (NC) sauce with the addition of tomato. I mention this because the sauce experience meant that this wasn’t quite like the barbecue that I first fell in love with, but similar enough to make me incredibly happy. This is really, really good stuff! And, like Paul’s, this is a place for early lunches. Getting here before eleven is a good way to beat the crowds. They’re sold out of barbecue by 2 pm, and earlier than that on game day.

The sweet, mayo-based slaw and corn sticks were more than just fine, and if I didn’t have so much more to eat ahead of me, I’d have really dug into them. The boiled potatoes were… well, they were potatoes and they were boiled, soft to the point of disintegration. The love that eastern North Carolina has for this particular side really eludes me.

I loved arriving when I did, with the sun still low and shining through the trees. The meats are smoked in a building behind the restaurant and the smoke pours out of the building’s doors, filling the air with the wonderful smell and, if you’re among the 99% of the population with a better camera and a better eye than me, you will catch some beautiful photos here with the sun reflecting off the dew and the smoke. 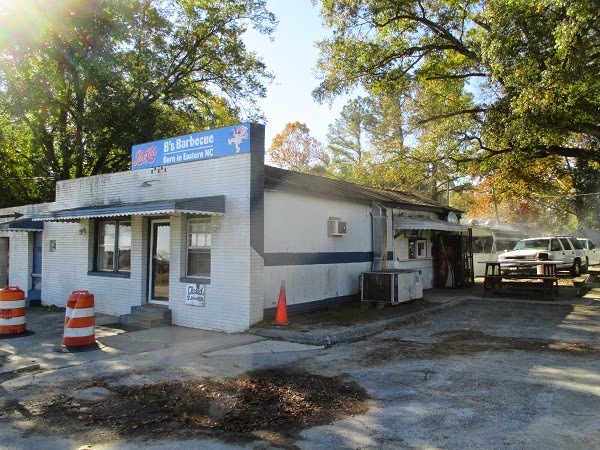 Interestingly, you know what I was saying in the previous chapter about Pepsi dominating the soft drink selection of locally-owned restaurants in the Carolinas? Well, up until late 2011, B’s was a Coke joint. The restaurant was started by Bill McLawhorn and his wife Peggy about 35 years ago. Bill has since passed away, and Peggy retired. Their three daughters, Judy, Tammy and Donna, are the current owners, with hogs being cooked by Dexter Sharrod.

As you see above, that building is an absolutely beautiful disaster that feels on the verge of collapse. Walking along the slanting floor from my table to the gents’ reminded me of that House That Defies Gravity that used to be at Six Flags Over Georgia in the eighties. It was apparently built as a service station, but I won’t better BBQ Jew’s awesome description (linked below): “Saying B’s has a parking lot would be a generous misstatement. Rather, it seems the B’s building fell from the sky and landed haphazardly in the midst of some scattered gravel.” Anyway, a Pepsi sales rep noticed the fading, weather-beaten Coke sign above the teetering building and saw an opportunity to pitch. Delightfully, they used a very old logo when they put up the new sign. It may be new, but nothing else is. It’s amazing.

Other blog posts about B’s Barbecue: