I think that the most dated story at this blog of ours is of a restaurant where time has stood still for more than twenty years. It’s the first story that I wrote about Paul’s Bar-B-Q, a terrific restaurant that keeps Oglethorpe County on the map of anybody who enjoys good barbecue. If you were to go and read it, some amazing things will probably pop out at you.

For starters, in 2010, we had not yet visited any of the amazing barbecue restaurants that have since eclipsed Paul’s in our preference. We hadn’t yet been to Old Clinton or Southern Soul or Scott’s or Skylight Inn or Brooks or Brick Pit or Leonard’s.

Also in 2010, we weren’t in the habit of ever having barbecue twice in a day. Man alive, did that ever change.

Perhaps strangest of all, when I wrote that story, I had evidently drawn a polite veil over the subpar experience that Marie and I had at Old McDonald’s Bar-B-Que in 2008, and was planning to revisit that restaurant a few months later, claiming that I loved it. It didn’t happen until November 2014. That is really odd. Some of these older blog posts provoke an intensely strange feeling of looking back at a road that the blog didn’t take. The first forty or so chapters are sprinkled with these little “hints” about stories that I once intended to write but never did, and the never-appearing Old McDonald’s story is a really weird one. See, either with Marie or by myself, I’ve driven past Old McDonald’s on I-985 many, many times in the last five years and deliberately avoided going to eat there because my last meal there had been so awful, but evidently in May 2010 I was planning to forgive them completely.

But while the blog, and our own barbecue experiences, have changed greatly in the last five years, Paul’s has not changed at all. George Paul briefly came in and said his hellos and moved on into the kitchen. Mr. Paul appeared to be older than the hills when I first met him around 1993. I seem to have gotten older; he remains ageless. His son Jimmy still has a spring in his step and works the cash register and serves up some of the most delicious stew – slash – hash that you can find anywhere. 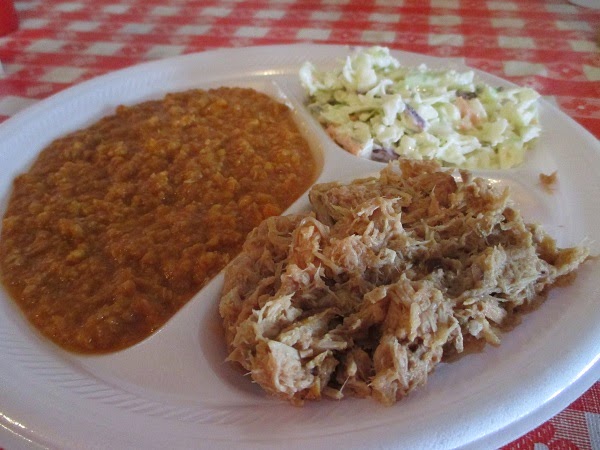 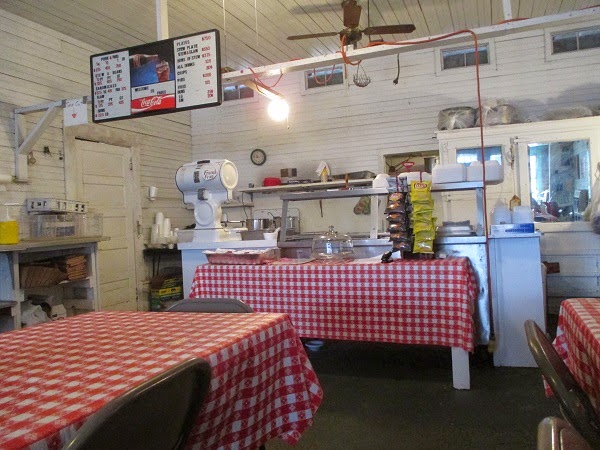 We’ve eaten at Paul’s a few times since that original story, in part because we love the food here and in part because we love walking around nearby Shaking Rock Park, where you can almost always find lots of lizards scurrying around. So we’ve often come this way by ourselves to spend the day alone with nature and enjoy some good barbecue. This time, we brought the three year-old for his first visit. Marie ordered a side of beans instead of the stew, and the boy tried to eat them all instead of his sandwich. He said those were the best beans “in the whole wide world.” 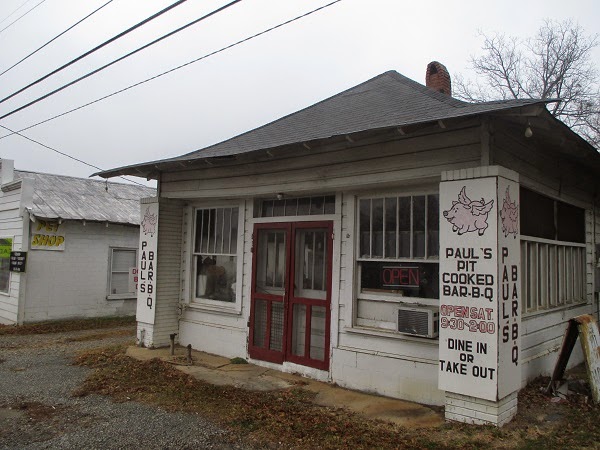 The Pauls smoke hams over hickory and red oak in an outdoor pit, following old family traditions that date back to the 1920s. They are only open on Saturdays and July 4. This restaurant is a must-visit, full stop. I may love a few places a little more than this one, but I still love it absolutely.

Another point where the original story has been shown to be dated is in my comparing this barbecue to North Carolina’s barbecue long before I had almost any experience with North Carolina’s barbecue. That was presumptive of me, but it’s been borne out to be kind of accurate. Even though they do not cook whole hog here, I think that the texture of the chopped pork at Paul’s is very similar to the chopped pork at Carolina Bar-B-Q in Statesville NC, and the flavor is incredibly similar to the chopped pork at B’s in Greenville NC. That’s one reason that I wanted to return to Paul’s as soon as we could after my trip to B’s in November. I’d convinced myself that the flavors were really alike, and I wanted to confirm that I was correct.

I’m very glad to have visited Paul’s again, and will certainly return sometime down the road. It was kind of a damp and misty day, and so we didn’t want to take the hyperactive three year-old over to slip on the wet rocks at the nearby park, but maybe soon, he’ll be a little calmer, and on a nice dry Saturday, we’ll be back to linger over happy old memories, look for lizards, and enjoy some of the best barbecue in the southeast.

This place is special. If you have never visited, do something about that.