I had half a mind to order something different at Man Chun Hong, but I didn’t. I’ve eaten here half a dozen times now and I get the Shan City chicken each time. It’s just amazing. We found this restaurant a little more than a year ago and it’s completely defeated any interest we may have in trying new things and exploring. Other than a few reliable plates of barbecue, a couple of burritos and a particular chili dog, this dish is my favorite comfort food in the metro Atlanta area.

And so, a “take two” of this restaurant would seem impossible to write about, as we have no new angle. Fortunately, when we stopped by for an early supper at the end of July, the girlchild, quite unwittingly, gave us one. I knew we keep this kid around for something. 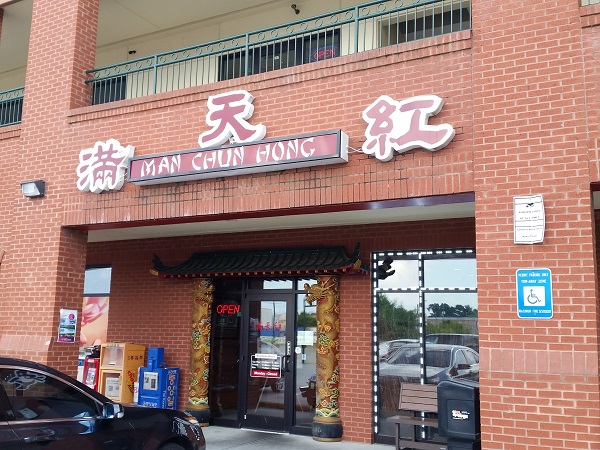 See, the girlchild is sixteen, and, as I’ll discuss in a story about sandwiches in a couple of Mondays, she really does not have an adventurous palate. Her favorite Chinese is mall Chinese, Golden-This Happy-That goop, because that’s what her friends all eat, and sometimes when she goes to their houses, she complains to their parents how awful we are to make her ride across town for something more authentic.

Once upon a time, I enjoyed mall Chinese just fine. Don’t fib, you probably did, too. And one day in the mid-1990s, when I lived in Athens, I popped in to some Oriental grocery store on Milledge near the bypass, wondering whether they might have some Pocky or something. It turned out to be principally Chinese goods instead of Japanese, and the manager was a young fellow who I recognized from campus. He was often working a “Free Tibet” table at the Tate Center plaza.

In the back of this store was a small restaurant, with maybe seven or eight different items on the menu. That’s kind of surprising to anybody who expects a hundred or more different things on a menu, like most Golden-This Happy-That joints. I asked the manager about the small selection, and he explained those were the only dishes their cook knew how to make. Well, that caught the very small and underdeveloped part of my brain that was slowly wakening to the idea of unique meals. It was around this time that I’d first driven out to Paul’s and learned there was a lot more to barbecue than a bottle of KC Masterpiece, so I was open, at last, to very new things.

I ordered the sweet and sour chicken, because, in my youth and inexperience, I thought that I liked that stuff and its radioactive red goop. What I got, after a considerable wait, was a dish of very mildly breaded chicken and vegetables in a very light brown sauce, made from scratch. I double-checked that they got my order right, and then I tasted it and I have wondered for years and read many books trying to figure out why in the world that radioactive red stuff exists when food could be so much better.

Sadly, I only got to eat at that grocery store maybe another six or seven times. If you go way, way back in the archives to this long and silly story about, of all places, Patrick’s Sub Shop, you may read an anecdote about how the Shrimp Boats on Baxter was bought by a company that wanted to invade the turf of Athens’ biggest Golden-This Happy-That joint, Peking, and turned into something called China Boat in 1995-96 or so. That same conglomerate bought the grocery store. I went in one day and saw a menu of a hundred items and knew everything had gone to hell.

I have to tell you all of that because my daughter rummaged through one of Man Chun Hong’s two menus – make sure that you ask for both – and ordered sweet and sour chicken, expecting radioactive red goop. This is what she received: 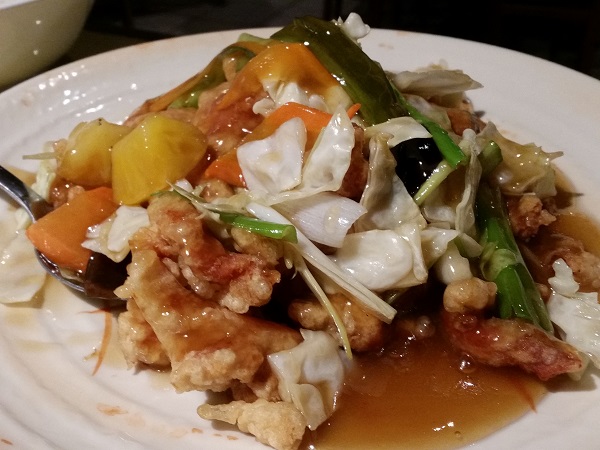 The girlchild was not pleased with the look of what she was given, but she agreed that it tasted a whole lot better than she first feared. It was probably not quite enough to destroy her prejudices, but she appreciated having something a little different. I thought it was terrific. It reminded me of that wonderful dish in the old grocery store, although it’s been so long I can’t swear how similar they actually tasted.

I’d have never thought to have ordered it myself, even if the Shan City chicken weren’t commanding my focus anyway, so I’m glad that we had my daughter along. I find myself wondering what Man Chun Hong’s take on some other familiar-to-Americans dishes like Kung Pao this or General Tso’s that might be like, although, to be honest, I enjoy my go-to so much, I’ll have to live vicariously through my daughter’s selections if I ever want to find out. I’m wondering, but I’m not losing sleep.