The next stop on my drive was in the town of Statesville, and it really was a great one. Carolina Bar-B-Q, which Gene and Linda Medlin opened in 1985, was absolutely excellent. I’d rank it second behind Lexington’s Bar-B-Q Center as my favorite barbecue stop on this tour.

The building had previously been home to both Gary’s BBQ and the Rebel Drive-In. Now that wonderful slanted roof has become an icon of good North Carolina barbecue. If it reminds you a bit of an IHOP, well, I don’t know that it ever was one, but the interior looks awfully like one of those from our childhood as well. There are plastic booths and tables, very 1970s in feel. On each table, there’s a little placemat to help you pass the time by teaching you various hillbilly phrases, such as “fur piece.” One might genuinely say that I drove a fur piece over these two days.

The Medlins offer two sauces here to accompany their meat, which is smoked over hickory wood for ten to twelve hours. It’s very lean – Charles Kuralt once, legendarily, complained that it could use a little fat – and it’s excellent. One of the sauces is a Lexington-style dip. The other is a clear eastern Carolina vinegar and pepper mix. As the second photo below shows, after a good shake of the bottle, it leaves little flecks of delicious cayenne all over the meat. It is completely wonderful. 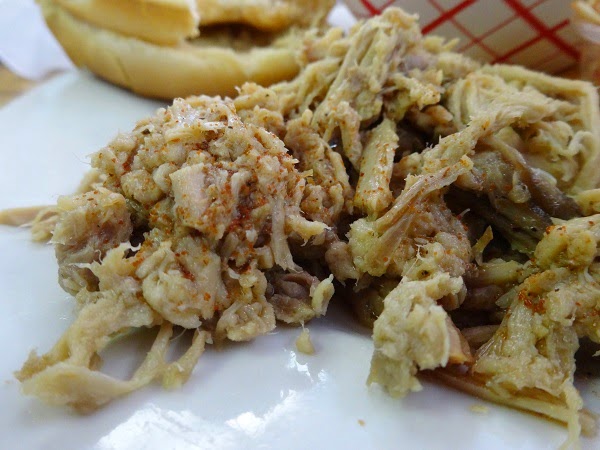 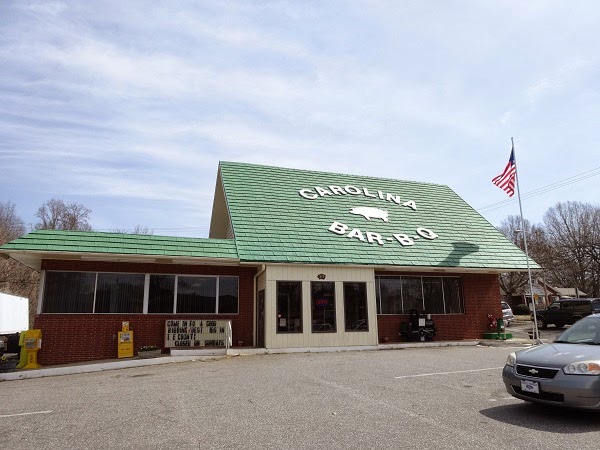 Now that I’ve actually been to North Carolina and seen the sauces in action, I’ve got a better understanding of them. See, here in Georgia, we’ll often find restaurants that label their sauces by state, but they can never agree on what they’re doing, so we often see a sauce that is more vinegary than not called “North Carolina,” but it’s almost never clear like what I was served. This clear sauce with pepper flakes is what is typically served with barbecue east of Raleigh, but not statewide. It’s an outlier this far west, but what I’ve described in earlier chapters as “splashing pink over the pork” is this stuff. I’ve made a couple of errors in my reporting previously, I see.

I arrived about 12:20 to a really big crowd. The restaurant was almost full when I got there, and a line formed as I ate. I thanked my awesome server and Gene Medlin, who was working the cash register, and moved on out of there. The pepper and pork were an absolutely divine combination. I chose right with the sides, and while I certainly enjoyed some good red slaw, the homemade potato chips were just completely terrific, and I loved the balance of salty potatoes and peppery meat. I was licking my lips for the next several minutes as I made my way back to I-77, tasting that incredibly delicious barbecue for long after I’d finished lunch.