As the road takes us back into the Greater Charlotte area for the final leg of this trip, a couple of thoughts strike me. A couple of points need clarifying, to my mind.

First up, there are three entirely different and separate chains of restaurants with almost the same darn name in the south. The best known, of course, is Whataburger – note the spelling, as one word – the Texas-based chain with the orange and white buildings that stretch into Alabama and Florida, and, briefly, into Georgia. (Two of the three in this state failed; I believe there’s still one in Thomasville.)

There are also, however, two completely unrelated groups of restaurants that call themselves “What-a-Burger” with hyphens. One of these groups of restaurants is based in Virginia, and one in the Carolinas. The original Carolina version started in the city of Concord, just outside the Charlotte perimeter on I-85, and expanded to fifteen stores. Most of them have closed, but the six that remain still have their original numbering proudly posted at each location. Store number 10, in Kannapolis, and number 11, in Mooresville, which I visited, look very, very similar, and very, very beautiful if you love old drive-ins with gorgeous canopies or awnings and Servus-Fone call-boxes. 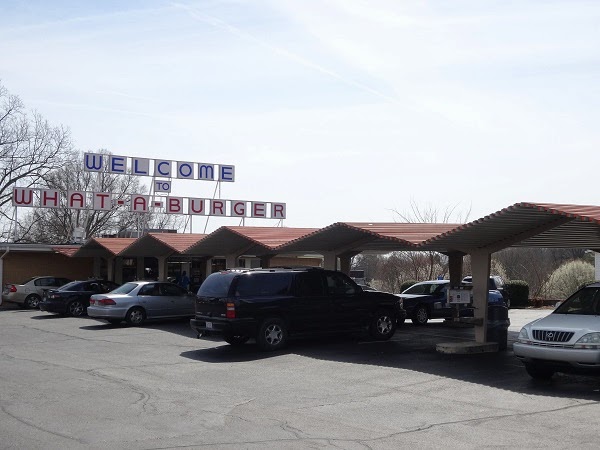 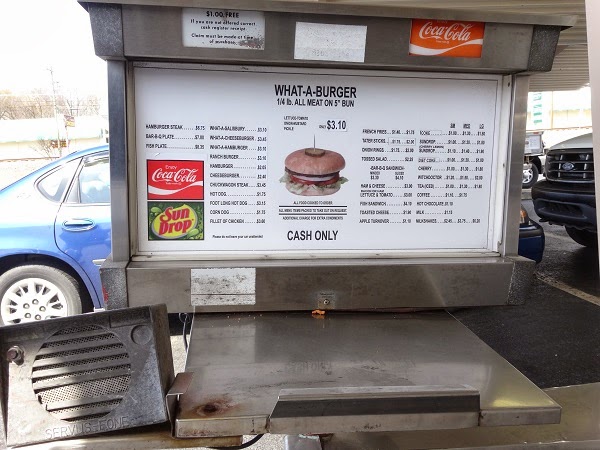 At this stage, the remaining six Carolina What-a-Burger stores in this group – oh, and there are also unrelated, independent stores with this name in Whiteville NC and West Columbia SC as well – are doing their vintage fast food shtick astonishingly well, which brings me to the next point of clarification: all this dadgum food that I’ve been ordering.

It should go without saying that even with some preparation, these food tour circumnavigations are exercises in, let’s be blunt, gluttony. I do ramp up my exercise, and spend a couple of days ahead of time eating very lightly and comparatively quite healthily before hitting more than a dozen restaurants in two days, but these are only meant to be samples, and not more than a dozen indulgences. Since I have absolutely no intention of trashing any of these places or writing hit job nasty reviews, I see nothing wrong in simply stopping by a place, ordering a sandwich, enjoying just a few bites to get a strong opinion of the flavor, enjoying the atmosphere and then sharing my wonderful experience and lousy photographs with you good people.

I can’t imagine that would cause a problem. I don’t expect anybody’s going to get hurt to hear me say that, and roar back, “What is this? This blogger said that was a good hamburger and he didn’t even eat the whole thing?!”

No, in point of fact, I had every intention of visiting this What-a-Burger, having maybe three bites of the sandwich and telling you what I thought about it. Then they gave me this deeply ugly and very unpromising burger, and I ate the whole thing. It was delicious. 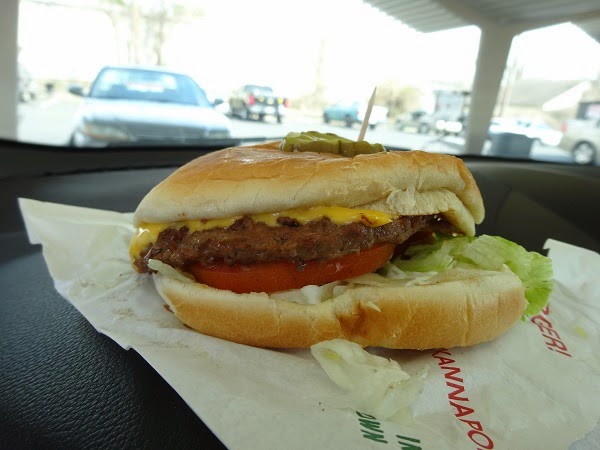 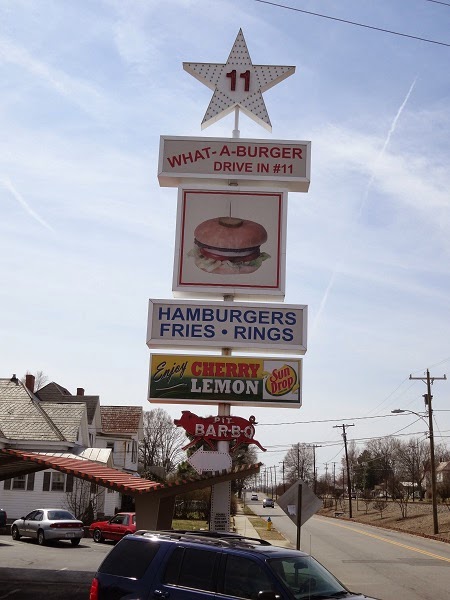 Now, I wouldn’t blame you for looking at that ugly, ugly burger and raising an eyebrow. I’m not saying that I haven’t had better burgers, but I have also had far, far worse, and paid a whole lot more for them, too. I don’t know what they do when they season these patties, but in the realm of three-buck fast food burgers, I don’t believe that I’ve ever had one that came within a ballpark of being as juicy and flavorful as this absolutely delicious, sinfully ugly sandwich.

The other thing that this What-a-Burger is renowned for is a hand-mixed cherry lemon Sun Drop. For those of you unfamiliar with it, Sun Drop is a citrus drink whose home is in Concord, and which tastes very similar to Tennessee’s Ski. I think you can make the argument that the two beverages were each quietly designed as clones of the slightly older Mountain Dew, but North Carolinians love their Sun Drop almost as much as they do their Cheerwine, and many independently-owned restaurants in the Charlotte area will hand-mix lemons and cherry syrup into the cup.

I had read that a cherry lemon Sun Drop was standard to order here and did so. As I waited for my carhop, however, I looked closer at the menu and noticed a drink called a Witchdoctor. I asked about that, half-expecting my suspicion that this was a cute name for what we used to call a “suicide” when I was in elementary school – a little bit of everything. Hardly. A Witchdoctor is a mix of Coke and Sun Drop, with cherry syrup, lemons and three pickles.

I’m sure the look on my face must have been one of abject horror. My carhop sighed and shook her head before continuing, “I know, but we sure sell a lot of them here.” 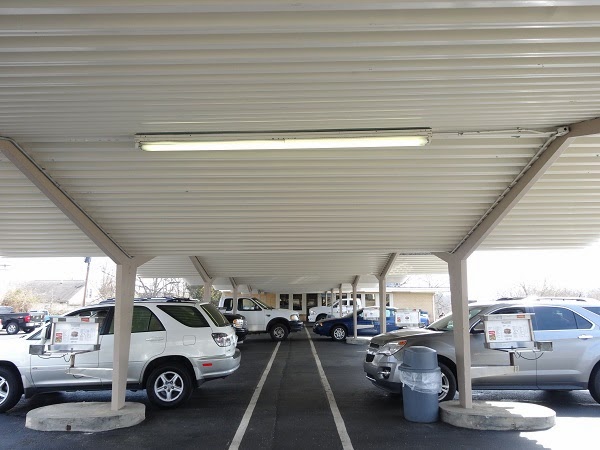 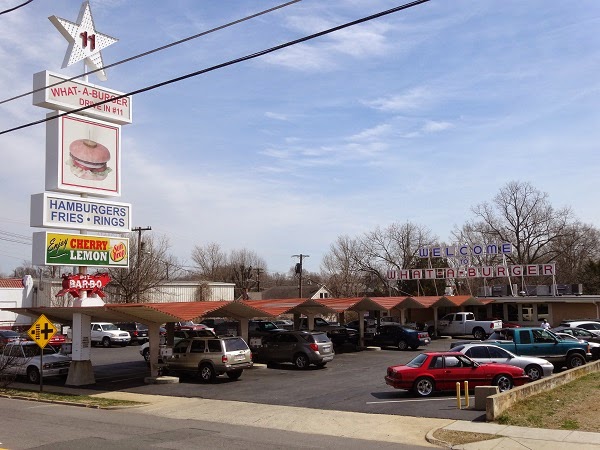 This beautiful zig-zag canopy and over-the-top sign has been photographed by hundreds of people before. Across the street, there’s a slight incline leading up to some train tracks. Dozens have stood where I did, snapping away happily. If you enjoy vintage restaurant architecture, smiling service, and a really good hamburger, then a stop off I-77 for this place is a must. The next time I’m in the region, I definitely hope to visit the Kannapolis location for another lunch in my car under their zig-zag.

Other blog posts about What-a-Burger:

Retro Roadmap and Roadside Architecture have both written about and taken a stab at numbering the stores, although Debra Jane mistakenly conflated the North Carolina What-a-Burgers with the Virginia ones.

My take, aided considerably by a Roadfood.com user called “Roadside Quest” (who also helped identify a few Shrimp Boats stores for us) is as follows:

The original # 1 was the first Concord store, which no longer exists.
The second # 1 is in Kannapolis. It has a zig-zag canopy and a small sign.
# 2 is the second store in Concord. No canopy, big sign.
# 3 was at 220 E Wilkinson Blvd in Belmont. It no longer exists.
# 4 was on E Franklin Street in Gastonia and no longer exists.
# 5 was at 1212 S Cannon Blvd, Kannapolis, NC and no longer exists.
# 6 may have also been in Belmont.
# 7 was an additional store in Concord. It had a big sign, and was demolished long ago. (See here.)
# 8 was another store in Concord, on US-29.
# 9 was in Abermarle, but closed long ago. It had a canopy and the vacant building at ~1203 E Main Street has been photographed by many. Not sure whether it has been demolished yet. Google Street View showed it still existing in September 2009.
# 10 is still open in Kannapolis, with a zig-zag canopy and big sign.
# 11 is this one in Mooresville, with a canopy and big sign.
# 12, not sure.
# 13 is in Mount Pleasant, no canopy, small sign.
# 14, not sure.
# 15 is in Concord, no canopy, small sign.

One of the missing two must have been in Charlotte itself. In 2008, a former carhop posted some recollections at City-Data.com (caution: comment thread full of morons) that there were several, and one had been on Independence Boulevard, near what is today Bojangles’ Coliseum and the classic South 21 Drive-In, about which more in the next chapter. There was also a store in the town of China Grove. So number 12 could have been Charlotte and number 14 China Grove or vice versa, however, “Roadside Quest” cautions that the chain may have recycled some of the numbers as stores closed.