With six stops plus a photo-only post in Charlotte and its surrounding suburbs on this trip, this city is just killing me with all the great restaurants and things to do. I am miles – miles! – from visiting all of the places here that I want to see, and hope that we’ll be back before long. But one thing was certain before anything else, I had to visit the South 21 Drive-In on Independence Boulevard. This location has been around since 1959 and seen off all kinds of competition over the years, including, reportedly, one of those What-a-Burger Drive-Ins as seen in yesterday’s post, which was apparently just down the street. Still family-owned (Maria Housiadas’s father and uncles, named Copsis, opened the place) and loyal to a small company of awesome carhops who’ve been with them for years, they’re said to make some pretty good burgers and the best onion rings money can buy. 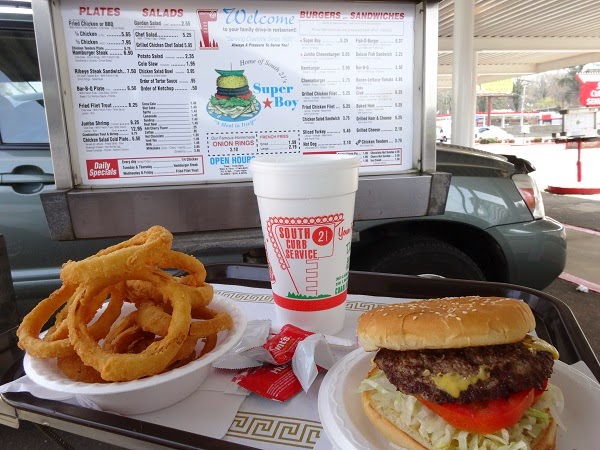 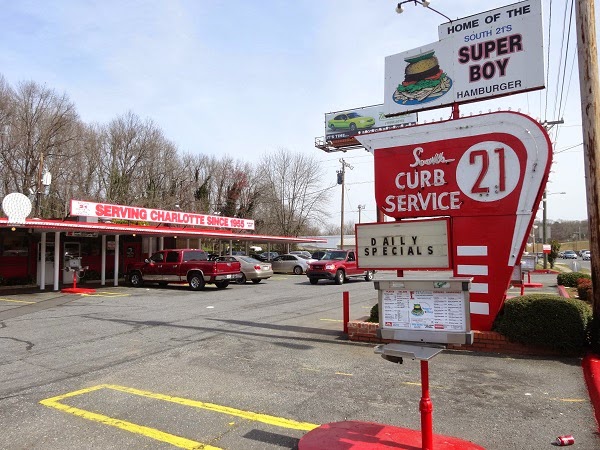 I don’t know what it is about drive-ins and onion rings, but my favorite on the planet are over in Knoxville at Pizza Palace. These aren’t too far behind. They’re quite different – Pizza Palace’s are very crispy-crumbly, and these have a solid crunch and bite to them – but if I were not beginning to slow down from the day’s eating – with more stops to go – then I would have eaten many more of them than I did. (And of course, there are the amazing onion rings at Atlanta’s Varsity, the original location of which is of course one of the all-time biggest drive-ins.)

The Super Boy also lives up to its reputation. The house-made patties on all their burgers, also available in other configurations with their celebrated slaw or chili, are really tasty. It’s an affordable, simple, very good meal. On a nice day like this, kicking back, calling in your order through the Servus-Fone, and enjoying a nice breeze with the windows down is one of life’s finer pleasures. 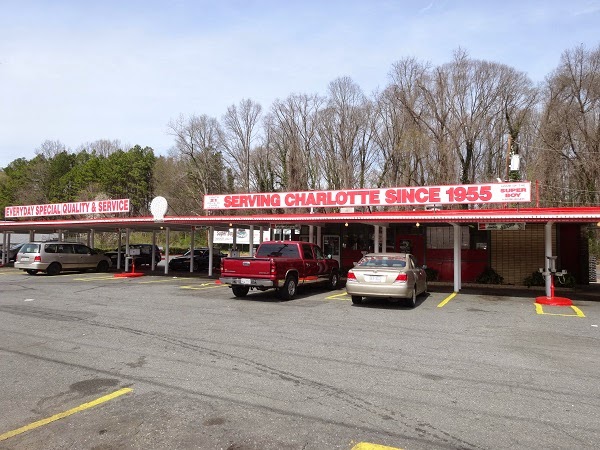 Reading around, I learned that there are actually a few other South 21 locations in Charlotte, and that this one was not actually the first. It was the original store on South Boulevard, now closed, that opened in 1955. This location opened in 1959. The Charlotte Burger Blog (linked below) mentions the other three existing stores, and also inspired me with a terrific phrase about keeping your old “fifties drive-in” authentically fifties: “They didn’t have to put anything up to remind you of the past—they just had to not take things down.”

Proper, authentic, vintage restaurant architecture – inside and out – is important to us here at our blog. I’ve mentioned before that art almost always reflects the time of its creation more than the creator intends. It’s why, despite being set in the 1950s, the TV show Happy Days is instantly recognizable to anybody as an artifact from the 1970s. So I get a huge thrill just being at a place that’s been around for a long time, whose owners have taken pretty good care of it.

Also on the Charlotte Burger Blog’s site is a photo of another piece of vintage Americana: a condom machine in the gents’ that probably dates back to the mid-1970s. I’ll always remember this condom machine because – now wait a minute, let me finish – I left Winston-Salem with the temperature in the mid-20s. I was wearing three shirts and a jacket. As the day went on and I drove south, it got a whole lot warmer, so I stepped into the gents’ to take off my undershirt. I banged the bejezus out of my elbow on that stupid machine. So no, not every dent in it came from somebody thumping it because it took their money. Then I went and took pictures of the beautiful property and got in my car and couldn’t find my glasses. Guess where I left them? That’s right, I set them on top of the darn machine while I was changing clothes and wanted to drive off without them!

Other blog posts about South 21 Drive-In: