With a little time available to me, I made my way southwest out of Winston-Salem on I-40. I made a long stop at a rest area, because since I had been able to rearrange Hill’s and Kermit’s that morning, I was more than an hour ahead of schedule. I spent thirty minutes walking around, pausing to help some fellow travelers at the big map find US-74 – that is not at all the same as I-74, no – and felt great when I got back to the car.

In Mocksville, I still got to my next destination way ahead of schedule. This is a restaurant that can trace its lineage back to the 1950s and a place called Buck’s Bar-B-Q. The longtime owner, Deano Allen, had worked for the restaurant that preceded his from 1961-65 when he was in high school. A decade later, Buck Miller retired and Allen, who’d remained friendly with him, bought the business and changed the name to Deano’s. He moved to the present building in 1998. For decades, the restaurant smoked its pork over wood, winning praise for its celebrated coarsely-chopped pork. I had read that the sandwiches here are terrific and asked for one with the slaw on the side. My server, a very friendly young lady, bragged about the place and brought me my food. Absolutely beautiful meat, and fairly tasty. 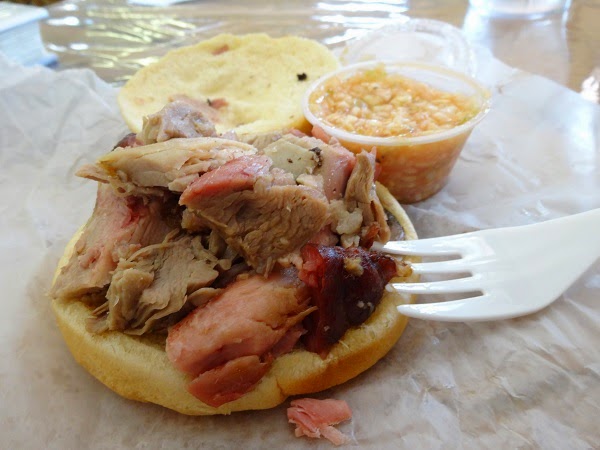 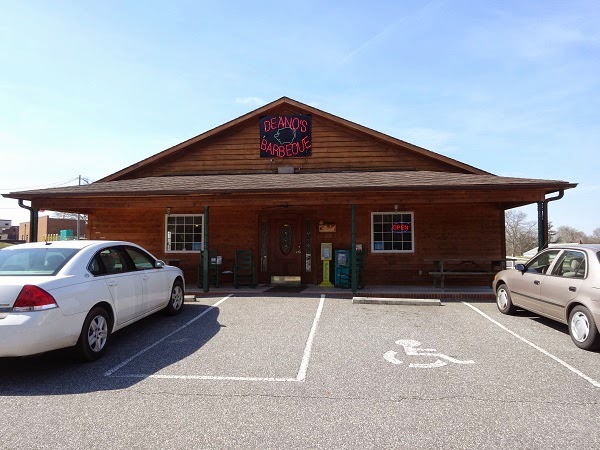 Deano’s Barbecue is a little controversial among Carolina barbecue lovers. It wasn’t until I got home that I started to get a little confused about this stop. I could have sworn that I found Deano’s last fall – I start planning these circumnavigations far, far in advance, and am working on the November jaunt even as we speak – on the NCBS Historic Trail, and, looking back at their map, it just wasn’t there anymore. A little research turned up the reason why: early last year, the blogger BBQ Jew stopped by and found that they were no longer cooking with wood, using a Southern Pride smoker. Now, I’m not making a value judgement – I’ve had some mighty good barbecue that came from a Southern Pride – but rules are rules, and, at the end of last year, the NCBS sadly removed Deano’s from the trail.

That’s unfortunate, as it looks like quite a few people – not just me! – have been using the Historic Trail Map for road trip ideas since it was first put together in 2006. I hope that Deano’s doesn’t suffer from a loss of tourist trade, because regardless of the method, the barbecue here is good and tender, and the experience a fine one. Like Fincher’s in Macon GA, they also get raves for their hamburgers, just in case, for some odd reason, you’re traveling with somebody who doesn’t like barbecue.