Way back when, I decided to reinvest the ad revenue that we earn from this blog into fun two-day trips, just driving around eating about every nine months or so. I call them circumnavigations and, last month, I went out on my fourth. I’m going to report this one a little differently than the first three (Alabama, South Carolina, the Tennessee River Valley), because when I started writing these up, I was concerned about the chapters that we post appearing much later than the visit. These days, I sort of enjoy the posts appearing several weeks later, and so there’s no need to hurry along through longer chapters incorporating several places.

Additionally, on the previous trips, I was finding restaurants that really had not been documented by any previous blogger or writer. This one was different because I was making my way for North Carolina’s Piedmont region, where, for decades, what’s called Lexington-style barbecue has been hugely popular, drawing writers from every medium to document the food culture. There’s even what you might call an advocacy group. The NCBS has a “historic barbecue trail.” They selected two dozen restaurants whose owners “cook their meat product on pits fueled by wood or charcoal, make their own sauce, that the pit had operated continuously for fifteen or more years, that the end product was a good offering and representative of North Carolina Barbecue and that the pit had earned and enjoyed the high esteem of its community, the barbecue industry and barbecue aficionados.” There are twenty-three restaurants among this elite crowd. We visited Herb’s in Murphy last year and were a little underwhelmed. For this trip, among other places, I picked eight others.

Actually, I ended up at a different eight than the eight I originally set out to try. More about that later on.

We’ll also touch on the apparent distinctions between “Eastern North Carolina”-style and most of what I sampled. Depending on who’s doing the explaining, Eastern-style is usually whole hog cooking, as is also seen over much of the South Carolina Lowcountry. West of the Research Triangle, it’s more typical to prepare pork shoulders. Around the Piedmont / Lexington area, chopped pork shoulder is typically given a light kitchen bath in a thin brown vinegar sauce. We’ll go into that a little more in the next chapter, but it appears that, rather than dividing the state into thirds, as we might with Georgia or Tennessee, there’s an east-west divide in the Tarheel State, with a strong subculture within the western half that has their own tradition, called Lexington-style.

With that in mind, settle in for the next three weeks for this story, starting out with a short explanation of the region’s barbecue trays, as first seen 220 miles from our house in the town of Shelby, at Bridges Barbecue Lodge. 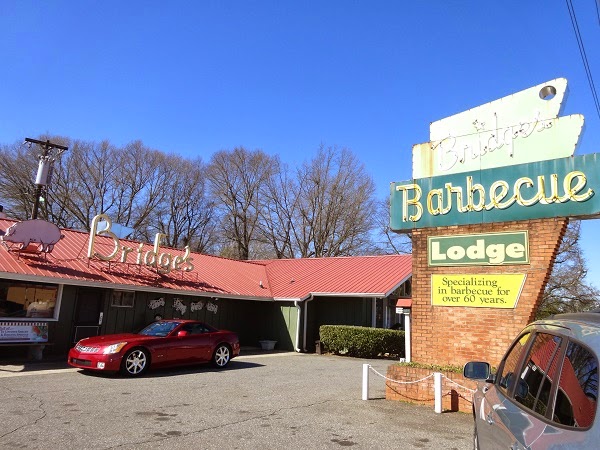 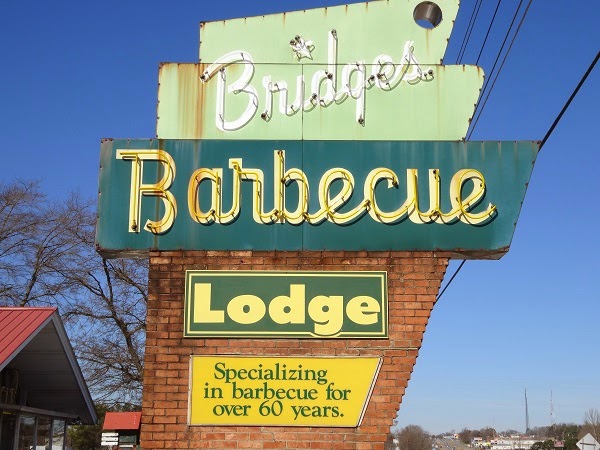 Barbecue trays – a little more than a sandwich and a little less than a plate – are common in central North Carolina. I saw them on the menu at most of the places that I visited, and had one a few years ago at Charlotte’s Bar-B-Q King. In many restaurants, it’s a paperboard boat, filled with a heaping scoop of meat in one half and a heaping scoop of red slaw in the other. It is unlikely that you’ll manage to eat this without a little bit of spillage. At Bridges, they also bring out a styrofoam cup of the sauce. Here, it is served warm, a dark and brown vinegar sauce that’s very strong and very tangy, much more so than the sauces I’d sample later on.

Red slaw is also common to the region. It is made with ketchup, rather than mayonnaise. Everybody’s recipe is a little different, but cabbage, vinegar, ketchup, and a little pepper are traditional.

This was a very tasty, very good meal to kick off the tour. I ordered the chopped outside brown and it was smoky, tender meat with a chewy bark, with a delightful, tangy kick. I enjoyed my tray with a can of Cheerwine and the first of about a dozen orders of hushpuppies. I didn’t eat more than about two of these at any given joint – I had barbecue to eat, after all! – but everybody in North Carolina is quite keen on serving you these. 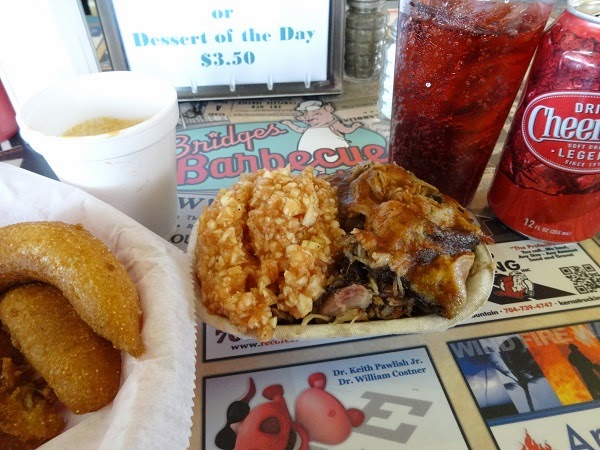 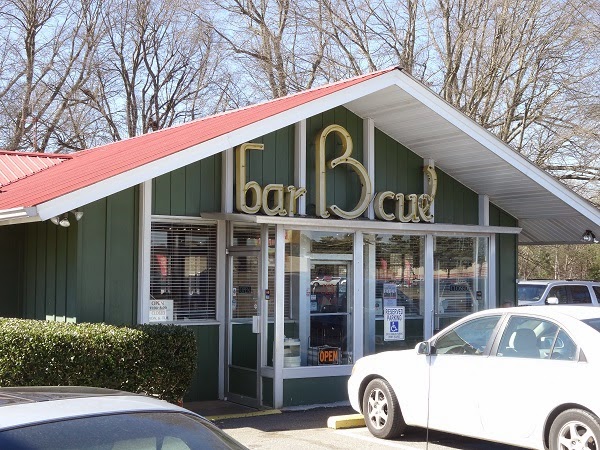 The stop was also notable for being my first wrong turn on the trip. Not paying attention, I gave myself directions to Alston Bridges’ Barbecue, a joint closer to downtown Shelby that is run by a different family with the same name. This might be worth a visit some other day, but travelers should start with the original. It was opened in 1946 by Red Bridges and his wife Lyttle. The present location, on a side road along US-74, is its third home, opened in 1953. Red passed away in 1966, and Lyttle followed him in 2008. Their daughter, Debbie Bridges-Webb, owns the lodge today and runs it with her children Chase Webb and Natalie Ramsey.

Behind the building, travelers will see what is, without equal, the biggest wood pile that any barbecue joint has. There’s an entire forest of hickory out there waiting for some pork shoulders to smoke. If anybody’s planning on making a barbecue tour of the Tarheel State coming up I-85, this is a great place to get started. Go see it for yourself.