A couple of weeks ago, the great city of Charlotte found itself at the center of a really dumb political debate centered around the quality of its barbecue. The 2012 Democratic National Convention will be held in Charlotte, and Michelle Obama was quoted as saying that, among other reasons she was looking forward to the event, she hoped to enjoy the city’s “great barbecue.” Cue The Charlotte Observer, who issued an editorial skeptical of Mrs. Obama’s quote, as everybody knows that their city has no great barbecue. To get the best stuff, you have to drive an hour north to Lexington.

I haven’t had the great pleasure of trying Lexington’s many great restaurants myself. Absent a wealthy sponsor and an expense account for this blog, it’ll probably have to wait, though I would certainly love to start one day in Lexington and eat our way east for about a week. I’ll take it as understood that Charlotte is not the barbecue capital of North Carolina.

But that doesn’t mean you have to trash your own city’s contributions while rushing to praise other towns! I mean, come on, Georgia’s best barbecue joints are nowhere near I-285 – the closest among the greats, Old MacDonald’s in Buford, is thirty-odd miles north of the perimeter – but if somebody wanted to praise the “great barbecue” in Atlanta, we’d know that they were talking about Harold’s and Fox Brothers and thank them for the compliment*. It looked for all the world like the newspaper was just getting snarky because some Demmykrat dared say something nice about their town. And, frankly, as the home of Bill Spoon’s, Charlotte and its paper’s editorial board should know damn well that their city does have at least one great barbecue joint, one that the city should be proud to host.

Marie and I tried Bill Spoon’s on our honeymoon in 2009. I asked her to select between that place and another that was recommended on Roadfood.com, the Bar-B-Q King drive-in. Since we ate at Spoon’s on our first trip to town, I decided that our day trip up to Charlotte and back last Saturday would see us trying the other. 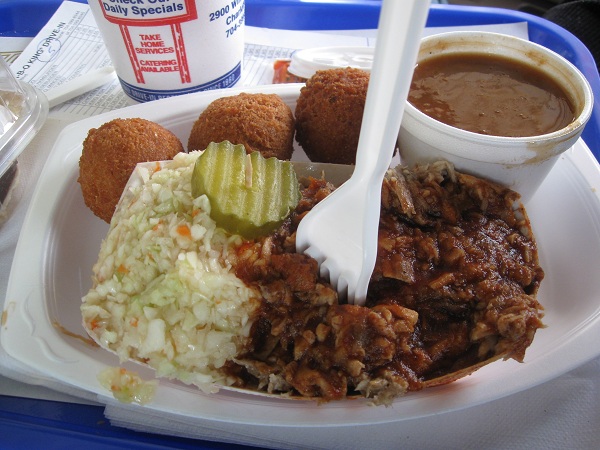 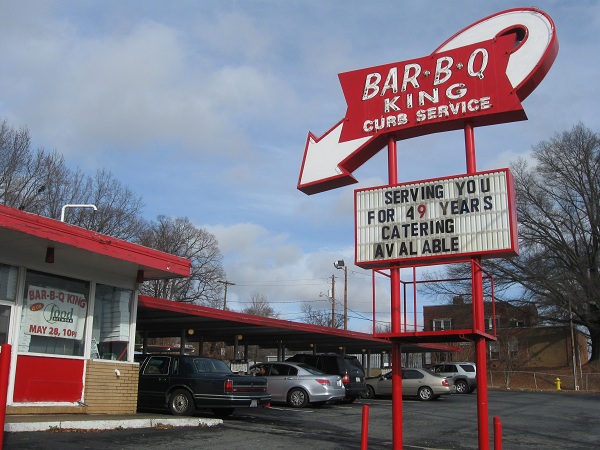 We pulled in a little after 2:30, and I confess that my enthusiasm had ebbed just a little bit by this point. We’d had a couple of interesting meals, one really good one, and a so-so fast food encounter which barely registered on my hobby of unusual regional chains, but a lot of boring nothing to look at, some really ugly parts of one city, suburban sprawl in another and all of one gorgeous college campus. I needed something to charge my batteries a little, and pulling into Charlotte did the trick. I think this is a super town, and we really enjoy dining in our car in an 1950s drive-in. Apparently there are at least two other drive-ins in Charlotte as well; we will have to check those out.

So Bar-B-Q King opened in 1959 in a really convenient location on the Queen City’s westside, and immediately made a name for itself with a really interesting sauce mix. They use unspiced and unrubbed pork shoulder here – the whole hog variant is common north and east of town – and a sauce that starts with vinegar and has a bucketload of additional ingredients, similar to the tomato-vinegar mix that you see throughout middle Georgia. A “minced” pork plate comes with a small serving of pork drenched in the sauce, along with an awesome vinegar slaw, hush puppies and baked beans.

Marie, who had already passed on anything but a nibble of my snack at the previous restaurant, had still not recovered from the gigantic chicken sandwich and sweet potato fries a couple of hours earlier in Columbia, and so she decided to just get a slice of chocolate pie. They were, sadly, out of the strawberry that initially caught her eye. Marie and I really don’t agree on the awesomeness of good vinegar slaw – and that’s okay; she likes pea soup a heck of a lot more than me – but she did enjoy the bites of minced pork that she tried. It’s not as good as Bill Spoon’s, nor is it as good as the barbecue at Thomaston, Georgia’s Piggie Park drive-in, which we enjoyed last month, but it is still pretty darn good. Marie also didn’t enjoy my drink. I only allow myself one soda a day, and here, they mix up a proper cherry lemon Sun Drop, you know, with an actual cherry and lemon in it. It’s too sweet and wonderful for words, though I concede that it probably would not go too well with chocolate pie.

Actually, having watched the drive-in’s spotlight appearance on Diners. Drive-ins and Dives, it looks like we missed a trick not ordering some chicken here. Unusually, they fry up some chicken which is said in many places to be quite amazing, and then dip it and cook it in their barbecue sauce like they would an order of Buffalo wings. What might be needed is a tour of Charlotte’s drive-ins, getting some of this fried chicken before going over to South 21 and then the Diamond, which is the new place being opened by the former operators of the now-corporate and trademarked Penguin. We could do those three in a day, if we also schedule a trip to a park for a long walk and a visit to Heroes Aren’t Hard to Find to buy some comics, I bet.