So the first three meals on our day trip through the Carolinas had been, one after another, each better than the one before. Something had to give, and it did. When I looked over the map, it looked like the only population center of note between Columbia and Charlotte on I-77 was the town of Rock Hill. I looked over South Carolina’s listing on Roadfood.com to see whether they suggested anyplace worth stopping in that town, and found a chicken place called Lee’s. I penciled that in and moved on, not realizing until later that the place was not quite what I thought I would find at Roadfood.com.

For that matter, Columbia itself was not quite what I thought I would find. I must caution anybody who’s getting ideas about traveling from the little trips that Marie and I make (and you darn well should) to not go through Columbia the way that we did. Look, every town has ugly sides, but if you use Google to direct you from I-20 to the neighborhood with Pawley’s Front Porch and then over to I-77, you won’t see anything but the ugly sides. Columbia is the home of many beautiful places and historic sites, of art galleries, soaring churches, an awesome zoo and one of the nation’s best children’s museums, but honestly, the main point of interest on this tour was the imposing facade of Benedict College, which, with its barbed wire fences and Checkpoint Charlie entrance, looks less like a place of higher learning and more like the state pen.

Sorry, Columbia. You deserve a longer look. Maybe next year we might come back through and let you show off for us.

Things stay lip-curling as you leave this unfortunate look at Columbia’s less attractive side and get onto I-77, which is a short hour and a bit hop through absolutely nothing up to Rock Hill. The countryside of central South Carolina is nothing that special and there are no interesting settlements punctuating the drive. Marie curled up for a little nap while I looked at trees. I bet people commuting between Columbia and Charlotte get tired of this drive really quickly. 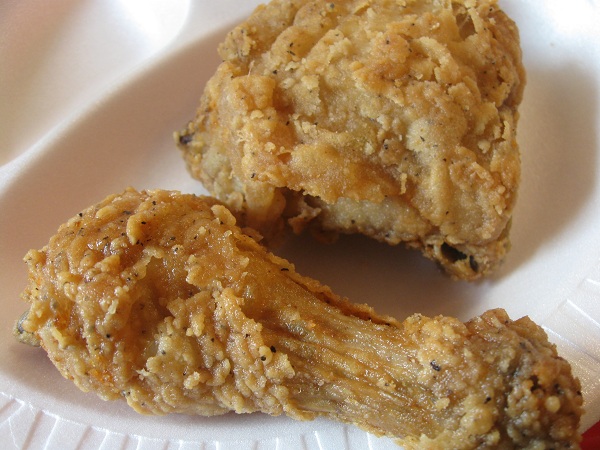 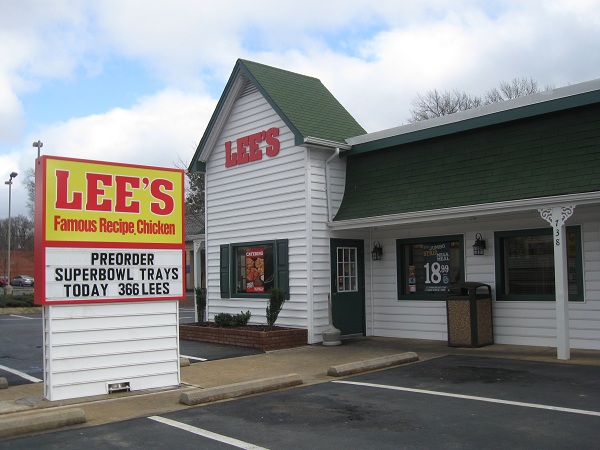 Rock Hill is the home of Winthrop University, which is one of the most attractive colleges that I’ve seen. If we’re ever out this way again, another stop in Rock Hill might see us enjoying a walk through this gorgeous campus. We did notice a couple of small barbecue joints on our drive through the town, possibly worth another stop, but we ended up eating at a fast food place. Yeah, I was pretty surprised, myself.

The Lee’s fast food chain, which numbers around 150 stores today, is related to Kentucky Fried Chicken just as its founder, Lee Cummings, was related to Col. Sanders. Cummings was Sanders’ nephew and partner in the 1950s. After he and the Colonel found massive success, sold the business and parted ways, Cummings developed a new recipe for fried chicken and, in partnership with Harold Omer, spent the sixties opening Harold’s Take Home restaurants in Ohio and Michigan. In the 1970s, these were converted to Lee’s Famous Recipe, and when Shoney’s bought the chain in 1981, there were 200 stores throughout the midwest. Shoney’s sold the franchise to the RTM company in 1995, who operated it in markets where they didn’t have Mrs. Winner’s stores. A Florida company bought the business from RTM eight years later. Their stores are currently concentrated in the states of Ohio, Kentucky and Illinois, with one or two locations throughout the southeast. There are none in Georgia or North Carolina, but a couple in Alabama and South Carolina, including this store in Rock Hill.

Interestingly, three years after buying Lee’s from RTM, this Florida enterprise, called Famous Recipe Company Operations, Inc, bought 113 Mrs. Winner’s stores from RTM. Last year, they seem to have shuttered about eighty of them. I kind of have a blind spot where mediocre, readily-available fast food is concerned. I had no idea so many had closed.

Lee’s, on the other hand, is mediocre but not readily available to us here in Atlanta, so even once I learned that this was a huge chain, I was still curious to see it. Honestly, it is pretty rare for me to want to hunt down fried chicken in the first place, since it’s just not my favorite thing. I ordered a two-piece meal, which came with a biscuit, and Marie had a couple of bites to try the flavor. It wasn’t bad, as these things go. Honestly, it had been a really long time since I had chicken from a KFC or a Mrs. Winner’s or a Church’s, and if you were to line up a drumstick from each in front of me, I doubt I could tell them apart.

It is really only worth the curiosity factor of seeing a fast food chain for just one visit. I can’t see myself needing to return. Should the boring road of I-77 take me back through the good city of Rock Hill, it will be to swing by Kickin’ Pig or Burk’s. If our eight-restaurant trip hadn’t already been planned to include three different barbecue places, I would have done well to factor those in. In fact, we would be having barbecue again about one hour after finishing this fried chicken snack…