Del Taco left the Atlanta market eight years ago and – no kidding – I have been missing it ever since. I have explained that I allow myself one locally-available fast food weakness, Krystal. If Del Taco were to move back into Atlanta, I’d enjoy one last styrofoam container of chili cheese fries eaten with a red plastic fork and sadly wave goodbye to Krystal, because I love Del Taco and that would be that. So when I learned that there was one in Spartanburg, my carefully-crafted seven-meal trip swelled to eight. There was just no way I was going to drive past a Del Taco without stopping. Man, was it ever good. Often times, almost all the time, the memory cheats on you, but Del Taco is, somehow, as good as I remember it.

But wait, perhaps you’re asking. Isn’t this, you know… the place that’s just like Taco Bell? No, not even close. This is the place that Taco Bell had to spend a lot of money to get rid of.

When I was a kid, Del Taco was one of my favorite restaurants. There was one on South Cobb Drive at King Springs where we ate all the time. It was one of those buildings with the white paint and forest green roofs that don’t seem to have survived the 1980s. Of course, kids don’t know what’s good and what’s not, but three tacos from this place was enough to keep me thrilled. My parents didn’t discover places like Monterrey or El Toro until I was eleven or twelve, so I grew up thinking that Del Taco’s fast food was what Mexican food was. I expect that many more people have had their perception colored by the beans-n-rice, chips-n-salsa, El-This Los-That Americanized take on things.

Actually, now that I think about it, I had my wisdom teeth out in the summer of 1990, and I remember my mom drove me by this place on South Cobb afterward to bring back lunch for everybody, so it was still standing, and still white and green, then. I also remember being briefly disappointed that my mouth hurt too much to eat anything before losing consciousness for the rest of the day.

Within a few years, though, Taco Bell evidently got tired of being second fiddle to Del Taco in the Atlanta market. It was around the same time that the upstart flexed its muscles, started the “run for the border” campaign, upgraded its restaurants in this area and built dozens of new stores. It is not technically accurate to say that they sprang up overnight, but I swear one Friday, I was giving Randy a lift from Athens to his parents’ house in Roswell, and we drove past a site on Holcomb Bridge Road that was a skeleton of lumber and studs. When I came back by on Sunday to collect him, that skeleton might have been a few weeks from operating, but it was visibly a Taco Bell. At the same time, Del Taco stores, such as the one about a mile away on 120, started closing in droves. Scuttlebutt suggested that a very aggressive franchisee had been buying Del Taco stores just to close them.

Shrinking by the week, Del Taco all but vanished, and from about 1994 to 2003, you could only find the restaurants sharing space with Mrs. Winner’s. There was one up in Cumming, and one right by the interstate off Chamblee-Dunwoody Road, and one on GA-92 in Woodstock, and that was about it. When I moved to this house in Marietta in early 2003, I reflected that, among its advantages, it would be a short hop from Del Taco. But by March, the Del Taco menu was removed and they were only serving Mrs. Winner’s chicken. All the Atlanta area stores closed in one fell swoop. By the end of last year, most of the Mrs. Winner’s were also gone. Time’s not kind to second- or third-tier fast food joints. 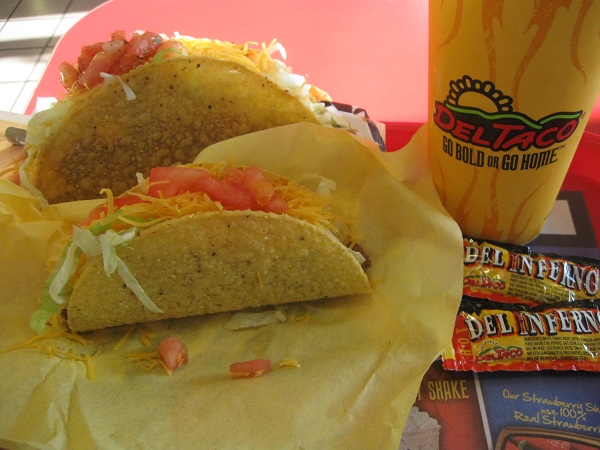 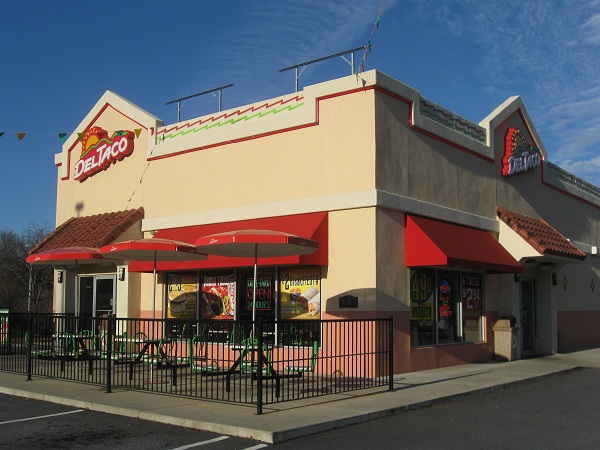 Always interested in regionally-available fast food, I occasionally read the various Wikipedia pages about restaurants I can’t get around these waters. A few weeks ago, I learned that Del Taco returned to South Carolina with a store in Spartanburg right off the interstate and had Google Maps pulled up within three-quarters of a second. The Spartanburg store opened in June, 2009. By chance, when we left the town of Rock Hill earlier in the trip, we drove past South Carolina’s second Del Taco; it opened in late 2010.

We got to Spartanburg about an hour and a half after leaving Charlotte and quickly found the place. Marie passed on anything here, not quite completely stuffed, but knowing that the next stop in our trip was just a few minutes away and she didn’t want to miss that. I was also a little leery about spoiling a memorable meal, and so I “just” ordered two tacos. The store’s menu is a little confusing; they seem to offer the same basic tasting item in four separate sizes: a taco, a classic taco, a deluxe taco and a macho taco. We were the restaurant’s only guests – even in 1980, I doubt that Del Tacos were all that busy at 4.30 on a Saturday afternoon – and so nobody got to hear me go “mmmmmmm” over my tacos drenched in “Del Scorcho” sauce. Well, I remember it as Del Scorcho. It’s “Del Inferno” now.

I told the manager (I guess) how happy I was to try these again and wished that Del Taco would move back to Atlanta. He was under the impression that the franchisee who runs the two South Carolina stores is actually based in Atlanta, so it might actually be possible. Until then, I’m going to have to conspire to get back to Spartanburg again sometime, and consider how best to arrange a repeat visit. With a 24-hour drive-thru, it will certainly make stopping by in the future easier than lining up a trip to this darn supper-only joint in Jackson that we want to try, or all the countless places on our wishlist that are closed on Sundays or Mondays. In 2013, should we be living in Asheville and driving through Spartanburg on our way to and from Georgia’s coast to see Marie’s mother and her father, we could come or go anytime, and Del Taco will always be open. Or, heck, if we do that day trip to Charlotte that I mentioned in the previous chapter, we can swing by on our way home no matter how late.

And yes, I do make considerations on when I might visit second-tier fast food joints two years down the line. Doesn’t everybody?