We’ve been together a long time, and exclusively for a few years now, haven’t we? It’s been a good time, and I have no complaints, honestly. But I find myself in the awkward position of having to write you an unhappy letter now. Well, just remember that I love you, and maybe always will, and let me tell you the whole story.

You see, somebody from my past came back to town last week. You might have heard me mention her once upon a time. She’s called Del Taco and, well, I went to go see her.

I know, I promised it would be you and you alone as far as fast food goes, but Del Taco and I have a long history. I even posted about it last year. On Valentine’s Day, no less. I have heard for several months that she was thinking about coming back to town. People were talking about Snellville being the site of the first store, and that is, honestly, far enough away that I could in good conscience see the both of you. I don’t think Snellville counts as local as far as fast food goes. But I talked to the manager when I went to see Del Taco, and he said that they’re planning to open sixty units around the region between now and 2022. The next two are under construction in Kennesaw – one of them’s almost done and just one exit north of me – and the fourth one is supposed to be coming up in Smyrna.

And I’m afraid that my friends just can’t be trusted to keep me loyal to you, Krystal. I’ve been following the reports on various sites about Atlanta real estate openings and announcements, and on Friday of last week, Matt wrote me to say that the Snellville Del Taco had opened two days previously.

So I drove out to see her. It actually kind of made sense to do so, because I needed to photograph the Fellini’s Pizza ON PONCE for the blog, because when I went to eat at the Fellini’s ON PONCE, I had forgotten my camera. So I was on US-78 already, and it was just a straight shot out to Snellville from there.

I’m sorry, is that kind of a feeble and pathetic excuse? Please don’t be hurt. Would it make you feel better to know that there are nine thousand, two hundred and twelve traffic lights between Stone Mountain and Scenic Highway, and every man jack one of them stopped me? No? Because I got there in the end, right? 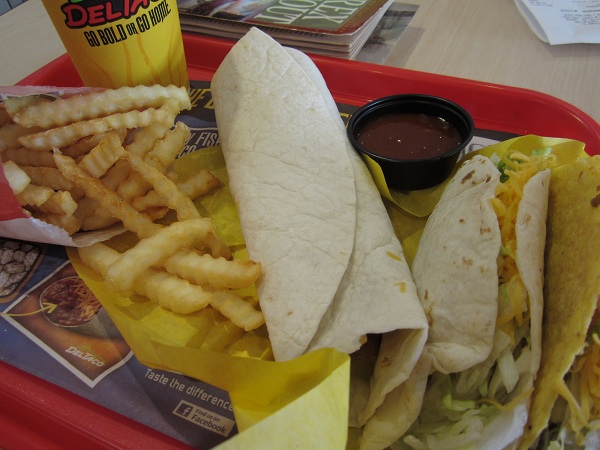 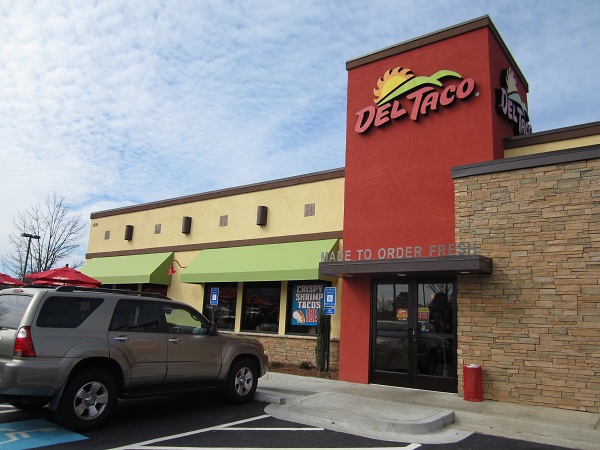 I ordered a combo meal with a chicken burrito, a chicken soft taco and one of those regular tacos that I love so much. They came with fries – fries, Krystal, that, I’m sorry to say, I love just as much as I love yours – and I had a Cherry Coke. I loved them, Krystal. I loved the flavor so much. And I love the sauces. This location has a salsa bar with the hot sauce in the to-go packs in little pump stations. I put Del Scorcho on the tacos and filled a little cup with the hotter Del Inferno as a dip for the burrito.

Was it worth it? Did it compare? Well, sure, compared to, say, Bell Street Burritos, these didn’t rate. But these are apples and light bulbs. It’s like enjoying a nice basket of your chili cheese fries that I like so much, Krystal, and churlishly complaining that it isn’t good poutine. This was a good meal. It wasn’t just childhood nostalgia, this is really good, flavorful fast food.

It was so good that… well, let me put it this way. Even though it was Del Taco, I didn’t honestly want to go all the way out to Snellville and come back with only one restaurant to report, so I resolved to swing by a barbecue place out that way. But when I finished my meal, I sat and read and then talked to a manager and… well, I ordered another couple of tacos instead.

Then I came home. I took the long, long way, because I had some thinking to do. And because I made a stupid right turn and ended up in Dacula, that, too. I knew I had to justify myself in some fashion. When Marie and I resolved to cut out national fast food – and I’m not sure that Del Taco qualifies, as she is only in seventeen states – I kept a place in my heart for you, Krystal, because I love your taste and I love your memories. Do you remember that time when I was in high school, and Dave and Dave the Third and I went to your Buckhead store on Piedmont to order five dozen Krystals? The girl looked at our wild hair and trenchcoats and asked whether we were in a gang, and Dave said, “Yeah, we’re the Purple Gougers, and we rule the South Side.” I’ve stopped at that Piedmont store I don’t know how many times and thought about the Purple Gougers.

I do love you, Krystal, but if I’m going to be exclusive to a single fast food chain, then, I’m sorry, but as soon as that Chastain Road store in Kennesaw opens, then it just can’t be you. You’ve done nothing wrong, although I suspect that your steamed patties are thinner than they once were. That first love, though, I think she’s just too hard for me to shake. She’s just that good.

Maybe I’ll see you again. I think that you’re in Asheville, and Del Taco isn’t, and if we move there sometime, then maybe I’ll look you up. Maybe we’d both like that. No, don’t cry, Krystal. You’re amazing in your own way, and this isn’t what you did, I promise.

One thought on “Don’t Ask Me Why”