This is Marie, contributing an article about Gnat’s Landing. Gnat’s Landing first came to our attention because of the 3-point VW bus that sits in front of the place with the vanity place “GNATZ.” That had a lot to do with how I chose the place. It was what sold the place when I was doing a search for kid-friendly places to eat when I brought my son to the Island to visit his grandparents. I also looked at the backstory of the owner on the web page and was amused and pleased that he’d been a toy store owner. Since my husband works in a toy store, that just made the choice more fitting.

Regarding the VW bus and what made that important requires a brief diversion. We have a family game of punch-buggy with a lot of house rules. Classic and New Beetles, PT Cruisers, and Mini-Coopers are all 1 point each, unless they have faux-wood sides or flames, in which case they are two points. VW microbuses, known in the game as “hippie vans,” are the holy grail, because they are worth three points. In-town trips are capped at 5 points per game, at which point victory is declared; one of these days I’m going to see a microbus with flames and faux wood siding and just pummel Grant silly with 5 punches. It’s also permissible to snap a cell phone picture of a car and send it to someone to get points. I fully intend to claim the three points for the hippie van in this picture, so any readers who also use the vehicle in your punch-buggy games – my apologies but I have already claimed them. There is also one of those cement bulldogs with the custom paint jobs squatting near the door; it’s decorated to be a canine VW bus.

The place is cute, with signs and memorabilia up on the walls that look like at least a significant part of them are collected rather than ordered from a vendor. The only indoor portion of the restaurant is in the bar area, but it’s not excessively loud on a weekend lunchtime, or wasn’t when we were there. The outdoor deck area was enclosed for the winter but I still felt more comfortable sitting in the warmer area. 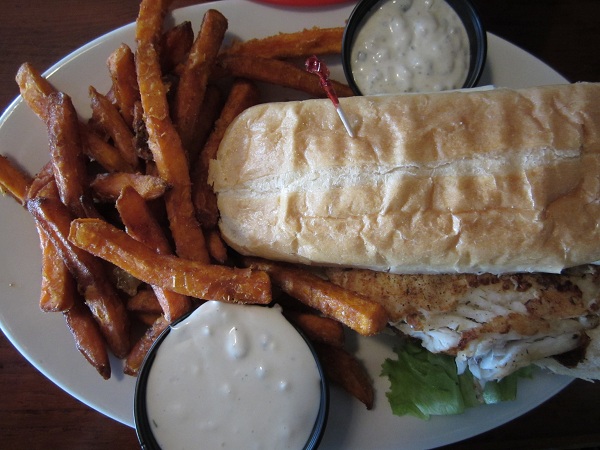 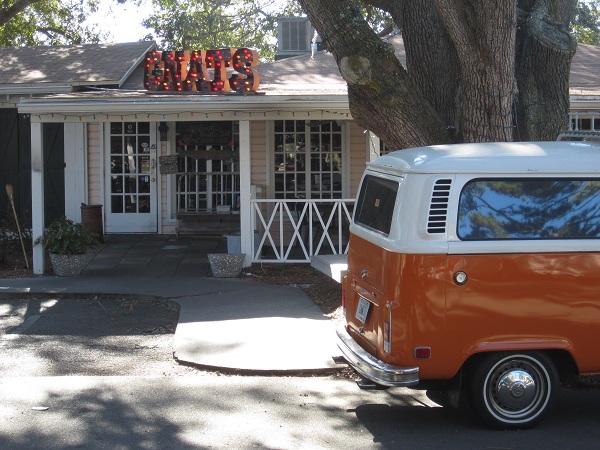 Although I didn’t know it at the time, the restaurant’s owner, who goes by “Boz,” is very ill. The restaurant’s blog has had daily updates on his health in the past week. In fact, the very day that I went down to visit my family was the start of his ordeal. The server who took care of us could very well have been one of the folks in the blog, and I wouldn’t have known – she did a good job.

Gnat’s Landing is, oddly enough, a chain of two – with the second location in Athens, GA, run by relatives of the owner (according to the blurb on the web site). It appears they share Athens bands with the St. Simons location. They also have a relationship with the Bubba Garcia’s restaurant that we did a piece on during a prior visit. The two restaurants have, put together, won the “most unique” category in the 2010 Red Hot Rotary Chili Cookoff.

I ordered a snapper sandwich because it looked interesting, but also because I knew better than to to leave the island without having had some kind of seafood. Grant says that one should eat things that an area is good at for some reason! My father had the best thing on the table, however: something they call a Vidalia Onion Pie. It’s an incredibly greasy but lovely-tasting cheese and onion bowl. My sandwich was tasty although not much out of the ordinary. The fries were good and hot. I would eat there again, although I’d want to see who might be playing before deciding whether to go. I suspect my husband will want to check out the Athens bands on occasion if we happen to have a weekend visit that coincides with that schedule.