Since we work with both a backlog and several drafts, I’m writing this entry the day after Georgia again won the SEC Eastern division with a win over Auburn. It was a big one, a 38-0 shellacking on the Plains that had the orange-and-blue faithful dejected and abandoning Jordan-Hare Stadium at halftime.

By chance, this comes on the tenth anniversary of the opening of Hilltop Grille, known throughout the southeast to listeners of the Georgia Bulldog Radio Network as that place where they broadcast Bulldog Brunch every Sunday during the season. In November of 2002, Hilltop Grille opened as the Dawgs won the Eastern division over Auburn, literally. In one of the most celebrated football moments of that decade, David Greene lobbed a desperate pass into the end zone. Auburn’s cornerback, Horace Willis, leapt about four inches to try and block Michael Johnson, who jumped about eight feet above him and brought it down in the corner, prompting an almighty and jubilant “Oh, God!” across hundreds of thousands of radios from the legendary voice of the Bulldogs, the late Larry Munson.

That amazing moment is commemorated in framed newspaper stories on the walls of Hilltop Grille, but it wasn’t those wall decorations that brought me here. No, it was, instead, the amazing collection of drawings and paintings by the great Jack Davis. From time to time, I’ve had the pleasure of reporting on some restaurants throughout our state that feature Davis’s work on the walls. These include mascots and general design for Gnats Landing and Bubba Garcia’s on Saint Simons Island, and caricatures of the owners of Bill’s Bar-B-Q in Hull, Mayflower Restaurant in Athens, and Old Brick Pit in Chamblee. The collection here includes quite a few of the frequently-seen beatdowns of other college mascots and, most amazingly, a painted nine-foot mural that has to be seen to be believed. Photos, especially the crummy ones that we inflict upon you, don’t begin to do it justice. 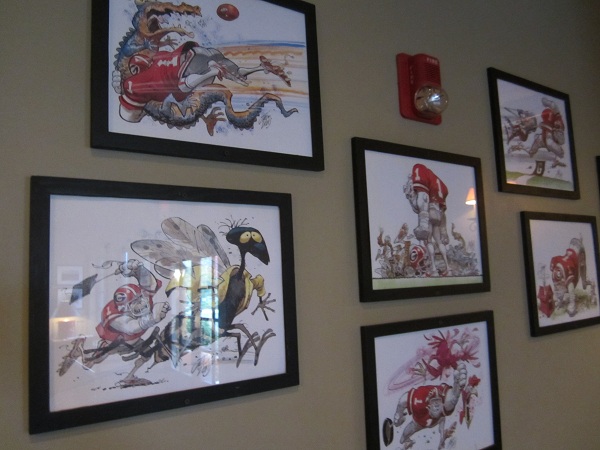 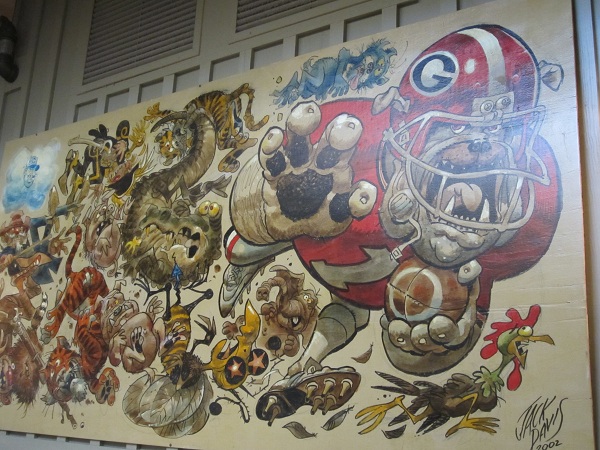 My visit to Hilltop Grille had been sparked by the opening weekend of Beyond the Bulldog, an exhibit of original Davis artwork from comics, LPs, and magazines that is appearing at the Georgia Museum of Art through January 6. As I was in town to meet Mr. Davis, enjoy the keynote speech by the exhibit’s curator, my pal Patrick, and marvel at his work, it seemed sensible to eat someplace where I could enjoy more of it.

My friend Devlin, who’s been mentioned a time or two in these pages, and who donated some of the memorabilia for the exhibit, told me where I could find Hilltop Grille, a place I’ve driven past dozens of times, and so I beat a hasty retreat from the reception so that I could quickly eat and rush back to Atlanta and retrieve the children from the babysitter. It was a real thrill to see Mr. Davis again and share a word or two with several pals and acquaintances, and to finally meet Hillary Brown, who writes Grub Notes for Flagpole, and with whom I’ve corresponded off and on for years. 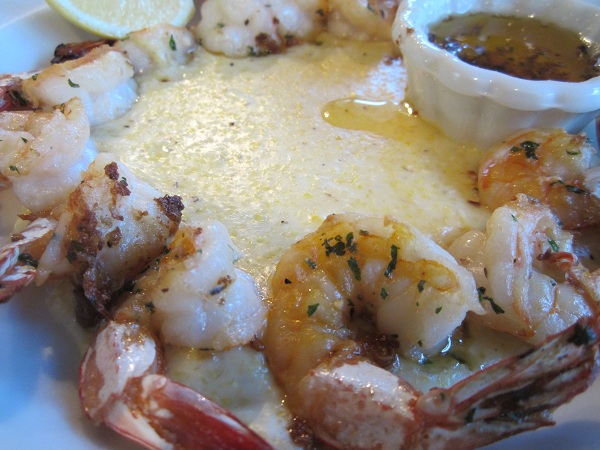 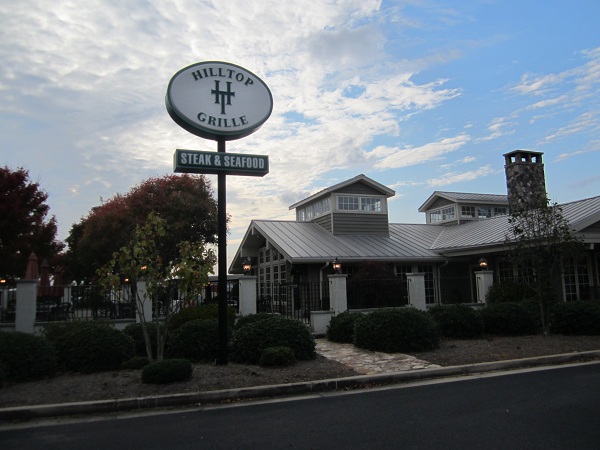 Hilltop’s reputation as an older-skewing steak and seafood restaurant, the sort of college town place where undergraduates “take” their parents and hope Mom ‘n Dad’ll get the check, seems to leave it mostly passed over by younger bloggers in Athens. It’s also kind of out of the way as far as the various popular, independent restaurant options are located. It’s on the old Atlanta Highway, surrounded by national chains, occupying an old Shoney’s building. I was not exaggerating earlier; I have literally never noticed this place despite driving past it heaven knows how many times in the last ten years. If anything, I thought that it was a bank.

I arrived for an early Sunday dinner, catching the place during the time of its quite welcome early bird specials. It wasn’t particularly busy, allowing me the chance to speak with some of the servers about all their Bulldog memorabilia, Davis and otherwise, before my meal arrived. I had the shrimp and grits along with some fantastic onion rings. Everything was excellent. These honestly ranked among the best shrimp that I have ever eaten, seasoned perfectly, and they didn’t skimp on the numbers. I remain very pleasantly surprised to find a meal this large, and this good, for so little money.

Beyond the Bulldog will be appearing for the next six weeks at Athens’ Georgia Museum of Art. I hope our readers get a chance to visit, and while Athens has a deserved reputation for Hugh Acheson’s restaurants, and the fantastic barbecue in the towns that surround it, Hilltop Grille is the perfectly-themed accompaniment to the exhibit. Go Dawgs!