A few months ago, when I resolved to start sampling more of Atlanta’s Indian restaurants, we got a few ideas via email and Twitter for new places to try. One of our readers, Viraj Deshmukh, recommended that I stop by Chat Patti, a popular vegetarian joint that’s located in that little “elbow” between Briarcliff and North Druid Hills, sort of between the Super Target and Tin Roof Cantina.

There are many reasons that I enjoy Indian food, but one of them is that you can go to many different restaurants and find experiences totally unlike the others. This has certainly been the case since I started stepping out for my occasional Thursday lunches at Indian places. Swapna is not much at all like Bhojanic, which is not much at all like NaanStop, and so on. Chat Patti, which opened almost ten years go, is nothing like any of the others. The restaurant is entirely vegetarian and offers a mix of north and south Indian dishes, and what they consider Atlanta’s only Gujarati-style (western Indian) buffet.

I’m still very much a novice and don’t know the distinctions between the regions of India and their cuisines. Many of the dishes that Chat Patti offers are chat, alternately spelled chaat, which are derived from street foods in the northern regions of India that border Nepal. After I read Jennifer Zyman’s review of this place (linked below), I thought that I would order a Sev Puri from their chaat menu. Puri is a fried, puffy bread made from unleavened flour, often either filled with potato or spices, or served with fried noodles and other vegetables. 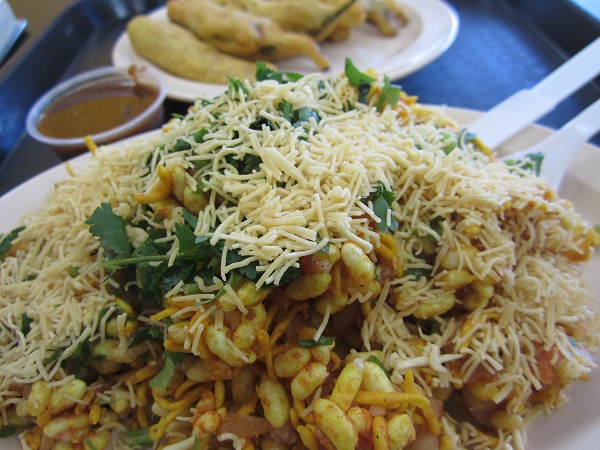 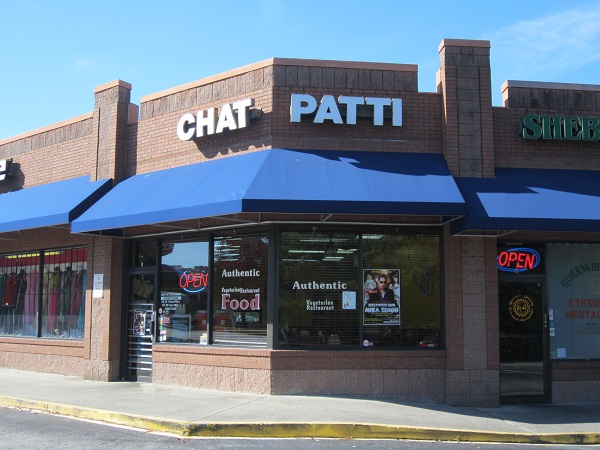 After I thought about it, though, I ordered a Bhel Puri instead. This is puffed rice bread and fried flour noodles, and mixed with spicy sauces, potato and onions. It seems to be a similar mix of flavors to the Sev Puri, but I have these whims. Most of the dishes here are inexpensive enough to sample a couple of things, and so I also had an order of Spicy Mirch Bhuji. This is green chiles deep fried in chickpea flour and served with a syrupy hot sauce.

The fried chiles were certainly good, but the Bhel Puri was really something. I was initially surprised that the dish was served cold, but I quickly got used to it, and really enjoyed the contrasting and rich flavors. It didn’t taste very spicy at first, but I really started feeling the burn after about a third of it. This was a very interesting and fun experience, and left me very curious about all the other things on this very lengthy menu. This is certainly worth another visit and some different dishes after I’ve tackled a few more places on my to-do list, one of which is in the same strip mall as Chat Patti.

Other blog posts about Chat Patti: