The last time I went to Athens, in January with Randy, we stopped at the very good Bar-B-Q Shack. Upon reflection, what we should have done then, for thematic reasons that I like to keep in order, was gone to the Mayflower Restaurant downtown. That’s because Randy’s father, a wonderful man who was lost to us in a stupid traffic accident about eight years ago, had been a student at the University of Georgia in the mid-1950s, by which time the Mayflower was already established. In a town with restaurant turnover as brutal as Athens, finding a place that’s been around for twenty years is uncommon. A place like the Mayflower, which opened in 1948, is one of a kind.

I plan all this nonsense out well in advance, and was wondering while at the Bar-B-Q Shack what I might have when I next came to town. As we left, Randy asked me whether I knew where the Iron Horse was. Of course, I did, so I drove him out there. The Horse has been a point of interest in his family’s stories, because Randy’s father was actually a resident of Reed Hall when a big group of outraged, mocking students lit a fire underneath the ugly thing outside his window in the spring of 1954. There’s a school of art department thought – it actually fueled a documentary that I have not seen – that this incident was a crime against the art world. See, some fine arts teacher figured, wrongly, that 1954 Athens was exactly the place for an eleven foot high abstract sculpture of a horse, and planted the very ugly beast in the residential quad nearest the football stadium. Sanford was only about a quarter of its present size at the time, but if you stood in the top bleacher on the north side and threw a rock over Reed, you could have hit this horse.

This was 1954 and Athens was a podunk town with a segregated state university. Elvis Presley was two years from a top ten single and Jerry Lee Lewis three. For anybody to have got the idea that the place was ready for abstract art, particularly this monstrosity, I’d suggest mental illness if Marie wasn’t telling me to quit being mean. It is an ugly and ungainly thing, the sort of thing Duchamp might have made, only Duchamp wouldn’t have been so vulgar as to call it a horse. He’d have called it “A Chorus Line” or something.

I mention this because when you sit in the Mayflower, you can see the ghosts of undergraduates from fifty years ago. They’re blond and crew cut and they wear flannel and they say “Barney’s uncle’s got a mattress and I can get a few buckets of pine straw and tonight, we’re going to set that stupid horse on fire.” 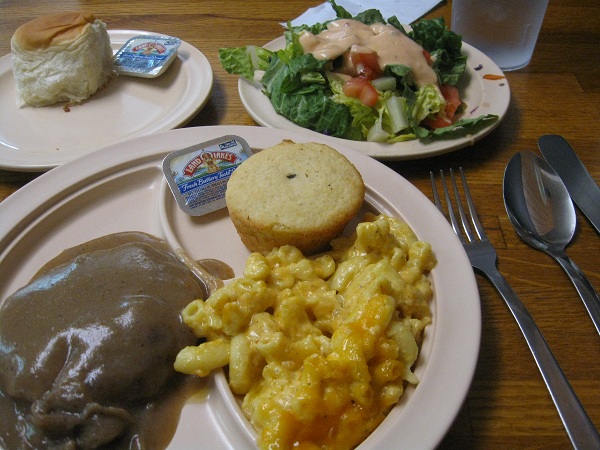 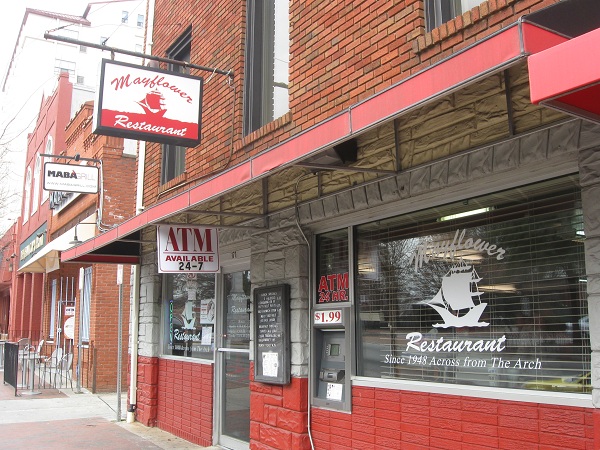 In other words, if the Mayflower has changed at all in the last half-century, heaven knows how. I suppose the prices have gone up, but that is about it. The original owner, Clarence Fulcher, sold the business to the Vaughn family in 1963. It’s been in its second generation of family ownership since Ricky Vaughn took over in 1991. Over the years, there have been many more traditional meat-and-three places to open within walking distance, many of them bringing a contemporary touch to an old-styled southern meal. At the Mayflower, they do the classics and they do them the classic way. It means that the restaurant is often overlooked in favor of younger and more exciting places like Five Star Day or Mama’s Boy, but if you want chicken livers, collards and lima beans, you’re almost certainly going to get the best meal of that type here.

I’ve had lunch at the Mayflower only a few times over the years, but never had breakfast, which many other writers have said is really special. I probably should have done something about that on my visit last week, but was really in the mood for some mac and cheese. I was by myself on this most recent trip; I’d invited David to come up with me, but he passed on coming along, leaving me alone to finish reading Janisse Ray’s Ecology of a Cracker Childhood, a book which my father had treasured, probably because if he could have turned our family’s home into a crazy old southern junkyard like the one described in this book, he would have. Dad would kind of miss the point of books like this.

The Mayflower offers burgers, chicken and sandwiches every day of the week, but their meat and veggies change daily. Fortunately, I came on a mac and cheese day, although sadly not a creamed corn day as well. I went with country fried steak and gravy, mac and cheese and a salad. This proved to be an excellent little salad with shockingly tasty tomatoes and really good thousand island dressing, although I am kind of kicking myself for not trying their vidalia onion dressing. I bet that is just superb. For seven bucks, that was a really good lunch, and it really made me wish that I could get up here much more often. Unfortunately, with gas prices going the way that they are, I really, really can’t justify more than one trip to Athens a month.

I ate here a few times in the late nineties and 2000 before moving back to Atlanta, and there has been one completely awesome addition since my last visit. By the door, there’s a fantastic little treasure that any visitor to Athens needs to see: a caricature of the Vaughn family by Jack Davis, featuring three of its members in Pilgrim dress, which the artist drew in 2004. The Mayflower was not the first restaurant that I’ve visited this year with Jack Davis artwork on the wall – the Old Brick Pit in Atlanta was – and I hope that it won’t be the last. Because really, some of you good readers might take my word for what makes a good restaurant in Georgia, or you might have any one of dozens of other foodies, critics and bloggers out there whose words you consider when thinking about what you might can find to eat, but when you get the Jack Davis seal of approval, you know that you have found someplace special. 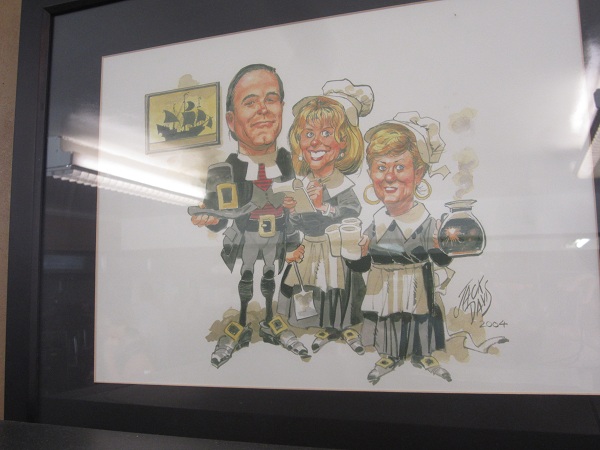