I was just saying last month that the presence of Jack Davis artwork is a sure sign of a restaurant’s quality, and here, for the third time this year, is a place with his wonderful and distinctive art emblazoned for all the world to see. Never mind the Zagat sticker in the window, does a place get a thumbs up from one of Mad Magazine’s Usual Gang of Idiots, that’s what I’d like to know. Bubba Garcia’s, a small cantina owned by the same group on Saint Simons Island behind the popular Gnat’s Landing, goes one better than even the good places this year with caricatures of the owners – Old Brick Pit and Mayflower Restaurant – by having the business’s mascot be a signed Jack Davis creation.

We had been enjoying a very entertaining trip down to Saint Simons. The children were mostly well-behaved and enjoyed walks around the village on Friday evening, with my daughter making certain that she visited her favorite vintage clothing store. Marie’s mother had made us a very good dinner of these nicely-spiced meatballs, potatoes and an awesome gravy, and then we played Settlers of Catan, a game which Marie enjoys more than anybody else, and which I will occasionally play as a third so that she’ll have an opportunity to get a round in.

On Saturday, the five of us drove over to Brunswick for a very neat little late morning trip which Marie will tell you about in the following chapter. In the afternoon, she took the kids for a walk on the beach while I napped and got some sneak previews of some things that Marie’s mother is knitting. It was a very, very relaxing vacation. In the early evening, we decamped and moseyed over to meet up with Marie’s father and stepmother. He took us all to dinner at Bubba Garcia’s. This is just a short drive to the other side of the island’s airfield in a little combine of shops and businesses called Redfern Village. You have to drive past all the island’s unfortunate invaders of chain restaurants, which awkwardly share space with the much more interesting local businesses which are screaming out to be sampled, and navigate one of the absolute worst traffic circles that I’ve ever seen to get to Redfern Village. 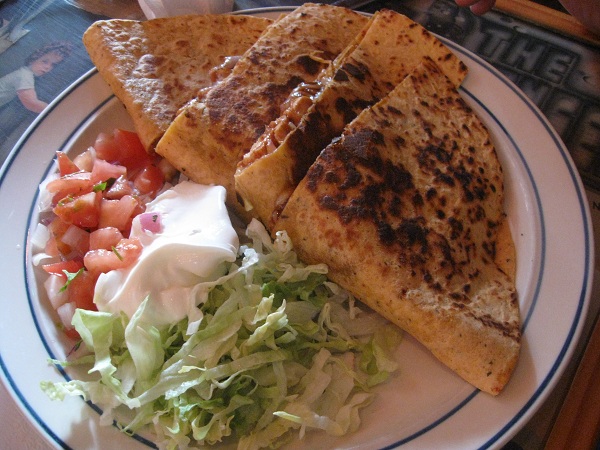 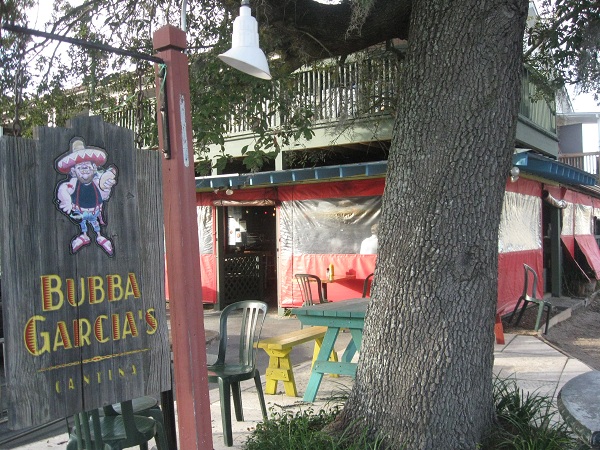 Bubba Garcia’s theme, unsurprisingly, is “redneck Mexican,” and the house specialty is a barbecue chicken quesadilla with red onions. Marie’s father had this; she had the standard quesadilla with shredded chicken. I enjoyed a very nice pair of shrimp and pineapple tacos with grilled peppers and onions, and my son had an order of steak fajitas. The girlchild and Marie’s stepmother, who brings out a sense of gleeful, conspiratorial silliness in my daughter like few others can, each had a plate of nachos.

Obviously, this place isn’t looking to win awards on tradition or radical new recipes. It’s just really tasty bar food, with endless chips, very good, mild table salsa and excellent service. I imagine that the place gets much busier and louder in the later evenings, but the laid-back, quiet, island getaway feel is evident at the time we came.

An hour or so later, the sun was thinking about setting and, after Marie’s stepmom returned home to see about her army of dogs, the four of us took a walk with Marie’s dad along the rocks above the beach. The tide had come in and I spotted a dolphin playing in the surf. Marie, who’d seen such a sight many more times than me, wasn’t as thrilled as I was, but I don’t think anybody could be. We made our way back to the village after checking out the new construction they had done around the pier, and stopped into a little cafe called Zuzu’s for dessert. 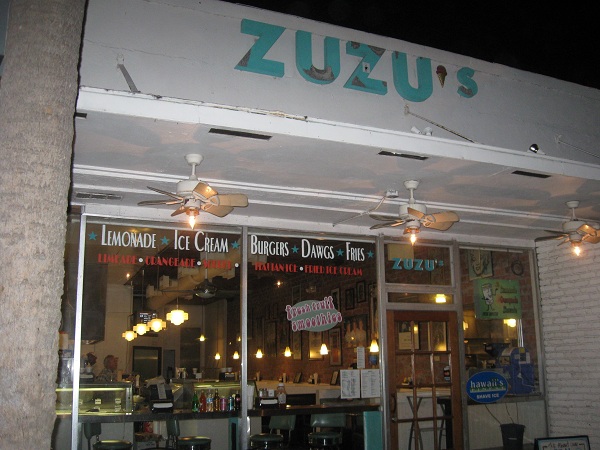 Zuzu’s is a great little place to get after-dinner treats. They make sandwiches and grill up burgers here, but they probably do most of their business as an ice cream parlor. They serve Greenwood brand ice cream here and they make the requisite shakes and sodas. My son was on a pistachio kick that day. Earlier, after their walk on the beach, he bought himself one cone at the nearby Saint Simons Sweets, and enjoyed a second when the five of us stopped in and Marie’s father bought us all desserts. He had a mango sherbet and I had a Black Jack: root beer with vanilla ice cream and chocolate syrup. That’s exactly the sort of thing one should sip while walking around on an evening as pleasant as that was.