So Thursday of last week, I went by one of the cafeterias on our to-do list of Roadfood.com-reviewed restaurants, and on Friday, the four of us visited another one. We took a trip down to visit Marie’s mother and father on Saint Simons Island, a trip that puts us within striking distance of six of the remaining restaurants on that list – five in middle Georgia and one in Savannah. I decided that we’d take the furthest one from the highway, Yoder’s Deitsch Haus. If the rumblings that I’ve been hearing about gas prices are true, I figured we should probably visit the one farthest away now, while gas is only about $3.50 a gallon. Yoder’s is about thirty miles south of Macon and then fifteen miles west of the interstate, and it’s probably worth the trip with gasoline at twice the price.

Boy, this is beautiful country down here. Much of the land in this chunk of middle Georgia around Montezuma and Americus is owned and farmed by Mennonites, as is the restaurant, bakery and country store that we visited. It’s the greenest grass you’ve ever seen, and unusually dense with black and white cows clustering around streams and milling around twisted and gnarled trees. The presence of the extended Yoder family is apparent as you drive west out State Route 26, with some of the roads that feed into the main highway sharing their name as well as the businesses. The cafeteria is set up in a large, unassuming building with a small sign out front, and staffed by servers wearing the faith’s traditional, modest dress. There’s plenty of parking, and space for buses from churches all over the state to bring in groups to eat here.

In the previous chapter, I noted that at Matthews, I had a pretty good meal. That’s not a complaint; dozens of inferior restaurants serve far worse within walking distance of that business. At Yoder’s Deitsch Haus, however, we had a genuinely terrific meal with even lower prices. I’m really glad that I didn’t do these two restaurants in reverse; I’m much more pleased to have my family share such good food with me here. 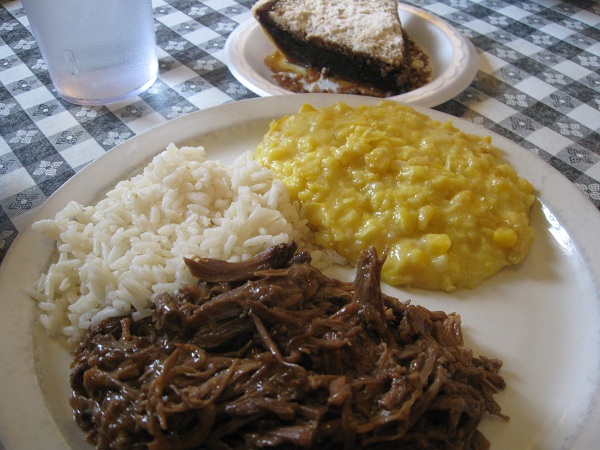 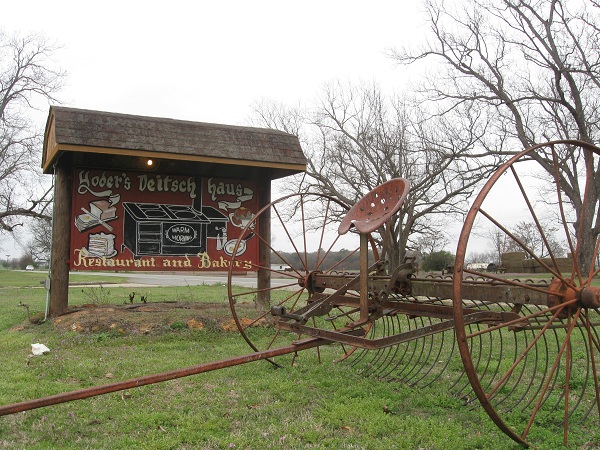 Like most cafeterias – well, apparently, I think that, prior to Matthews, it had been about six years since I’ve been in one – guests can select a salad first, and then a dessert. At Yoder’s, this could be a tremendously dangerous choice, because you could probably just sit down to four slices of pie and call it the best meal of your life. I’ll come back to that. Should you go, try and restrain yourself and select your meat and two. Marie and I each had pot roast, which was very, very good. My son had fried chicken, which was even better, and my daughter had sausages, which were evidently amazing, but she gobbled the darn things up so quickly that nobody else got to try a nibble.

But as good as the meats here are, the vegetables are even better. I was a little discouraged by the dull iceberg lettuce in the salad, but all the other veggies were quite excellent, especially the beets. I could have just had a bowl of those and the dressing. Marie says that we shouldn’t call it thousand island dressing so much as “inspired by” it, so I’ll take her lead. We each had creamed corn, which was excellent, and various other treats. My son was not as taken with his mashed potatoes, which he thought were lumpy, but my daughter loved her cheesy potatoes and Marie quite liked her green beans.

Oh, but then, these desserts. Marie had a slice of cherry pie, which she said was amazing. My daughter had chocolate, which she insisted was better. My son had peanut butter, which he not only insisted was better than either of theirs’, but even better than the peanut butter pie that he had at Zarzour’s in Chattanooga three weeks previously. True to form, he then got out his phone and updated his Facebook so that all his friends stuck in fifth period could see that, once again, my boy was out on a family trip lording his awesome desserts over them. But then I allowed my children each a single small nibble of my slice of shoofly pie, which is a crazy, thick and sticky melange of molasses and brown sugar and both children wept. This is the best pie on the entire planet. Gas could get up to seven bucks a gallon, and if you come by I-75 exit 127 in Georgia, you’re still going to want to pull over and drive the thirty mile round trip for a slice of this. Marie said that it was all right, but she likes fruit pies better. Marie is, occasionally and rarely, hopelessly mistaken on points like this.

After lunch, I thanked the staff and we wandered over to the country store. My daughter and I were distracted by a goat named Martha, whom you may feed for fifty cents. Martha probably won’t allow you to pet her unless you shell out for some food first, I noticed. In the country store, we considered buying some licorice or horehound for the road, but settled on a jar of locally-made blueberry jam. Marie’s hoping to make pancakes one morning this weekend so we can try that out. The girl at the register was very amused by the two-dollar bills that we used to pay for it.

We then enjoyed the nice ride back to the interstate, bought some gasoline while it’s still only $3.50, and made our way across the state to the coast. It’s a straight shot down Georgia 26 to Hawkinsville, where you can pick up US 341, the old Golden Isles Parkway, and take the two and a bit hour last leg to Brunswick. This is probably worth discussing a little more should we actually stop along the way and eat on this road, but I find this a much more pleasant ride than the interstate, with only one mind-numbing segment, the twenty-odd miles just east of Jesup. Then Marie drove around Brunswick down every fool road in town for half an hour before she got to the causeway. Well, she lived here for years; nostalgia can do this to a driver. And she drove right past Willie’s Wee-Nee Wagon, which is on our to-do list for a later visit, so we can’t hold it against her.

Other blog posts about Yoder’s: