Marie and I made it our rule to not give a negative review to any restaurant that either of us visit. It goes against the grain of this being the story of a good life spent eating well. If we have a bad experience at a restaurant, it just doesn’t make it to these pages. That doesn’t mean, however, that I can’t express a little disappointment when an otherwise good meal just plain lets me down.

I first heard of Matthews Cafeteria when the second volume of the Diners, Drive-Ins and Dives tie-in books was released. I was really looking forward to the second book, because I feel that Georgia was badly underrepresented in the first one, with only the Marietta Diner making its pages. Don’t get me wrong, that’s a pretty good restaurant, but it’s still a little overrated. I wasn’t sure, then, which Georgia restaurants had made it onto the show. You can check out the full list yourself, thanks to the excellent Flavortown USA fan site.

So the book was released – this has been a year and a half – and Georgia got two more restaurants in the print archives of Triple-D. Neither of which I’d ever heard of. It felt like Fieri got together with the ghost of Douglas Adams to upgrade Georgia from “harmless” to “mostly harmless.”

Well, Matthews stayed off my radar until it got added to the list of restaurants reviewed at Roadfood.com late last year. When we started Marie, Let’s Eat!, we agreed to visit and feature all of the 29 restaurants there, barring two for reasons I’ll mention when we finish the goal. Last year, two more were added – Barbecue Kitchen in College Park, and Matthews Cafeteria, meaning there was no getting around it, I was going to have to go to Tucker and try this mostly harmless restaurant. (One of the Roadfood.com restaurants, Melears in Fayetteville, has since closed, leaving a total of 30 on the site. At the time of writing, we are ten away from the goal of 28. Two of those ten will be appearing in this blog over the next week.) So I grumbled and complained and looked around and actually read Fieri’s team’s writeup in the book, and watched the segment on YouTube. I also asked around a couple of months ago to see whether any of my friends knew anything about the Roadfood.com restaurants on our agenda. My friend Laura, whom I have known since high school, when I listened to too much Smiths and she listened to too much Duran Duran, said that theirs is the “most awesome home cooking ever” and that she used to brunch there every week.

And then there are the reports of their Brunswick stew. Now, if you look up the Triple-D segment on YouTube, you’ll get the very curious sight of Fieri acting like he’s never heard of Brunswick stew at all, which is really weird and not especially believable, but you’ll also see this amazing concoction of chicken, creamed corn, potatoes, Worcestershire sauce and a whole mess of other stuff that looks like the most fantastic stew ever. Suffice it to say that when Thursday rolled around, I was licking my chops in anticipation of getting to Matthews as soon as they turned the metaphorical “lunch” sign on to get ahold of that stew.

Would you believe they didn’t have any? Or that the girl at the register said that they only have it on Wednesdays?! 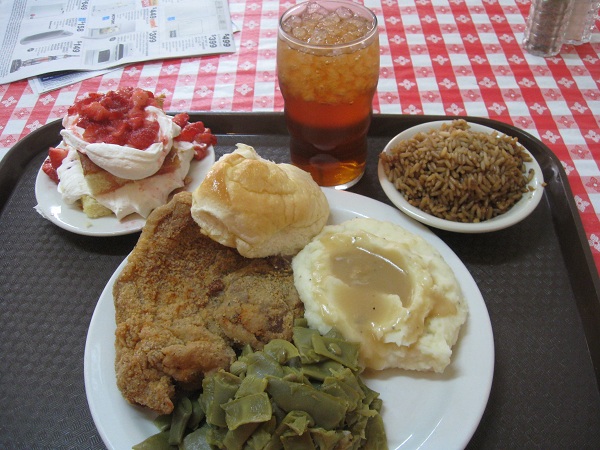 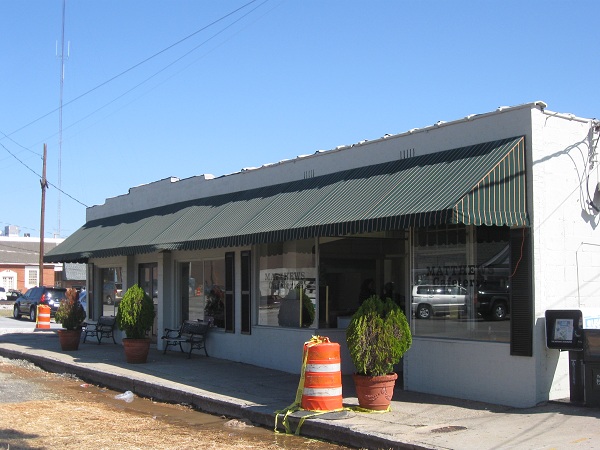 Stymied and not a little crushed, I enjoyed what was nevertheless a pretty good meal. I went for a traditional meat and three, with a pork chop, mashed potatoes, green beans and dirty rice. Everything was quite tasty, especially the dirty rice, which was seasoned just perfectly. I think that if I actually lived in this section of Dekalb, I’d be ready to eat here most of the time. It’s a proper southern meat and three, every bit as good as, say, Vittles or Folks Southern Kitchen. In fact, there’s a Folks just a hop, skip and a jump away, down Lavista near I-285, and you can get food of the same or better quality, for better prices, at a locally-owned place here at Matthews, so there’s no reason to frequent that particular outpost of that chain. No, the vegetables are not of the same quality as the region’s highest points – Mary Mac’s and Doug’s Place – but they’re just fine for a meat and three.

I was, nevertheless, a little disappointed, not merely in the lack of Brunswick stew, but in the lack of attention from the wait staff. They seemed to employ an army of ladies in white with red aprons, but the only ones who spoke with me at all were the lady working the line serving my food and the one at the register, who told me the bad news about Brunswick stew only being served on a day I’m working downtown. I was there for the better part of forty minutes and helped myself to a couple of top-off refills of the very good sweet tea, and not one person asked after me. It’s probably just as well; I might have asked an impertinent question about why the heck there was a microwave oven against the far wall next to the bottles of A-1 and Red Rooster. Don’t know that I’ve seen that in a dining room before.

The meal, as I keep saying, was pretty good, but whatever disappointment I had with the service was more than made up for with the strawberry shortcake. This was amazingly decadent and wonderful, and almost as good as the lovely pound cake treat that Marie made a few days before. I’m sorry that my better, sweeter half wasn’t around to try it. Hers is better, but she appreciates other people’s excellent desserts even more than I do.

But while I’m registering disappointments along with the good food, let me raise one other. The previous Saturday, Marie had to work some overtime hours. I picked her up afterward and we had a little cheap date night, just the two of us, at the wonderful America’s Top Dog. The previous visit proved to be really good, but this second trip saw me trying one of their half-smokes with chili and man, oh, man, was that ever amazing. It wasn’t until I was back on 285 after lunching at Matthews that I realized what I should have done once I realized I wasn’t going to get to try this Brunswick stew was just had two veggies and a dessert, and then stopped by America’s Top Dog one exit north for another half-smoke. I had a perfectly good meal, but I was completely stuffed, and what I should have done was thought it through a little more. For somebody who looks forward to regularly visiting a fast food joint two years in the future, I sure do let my impulsive side mess me up when it comes to getting something to eat, don’t I?

Other blog posts about Matthews: