Every so often, I run into a restaurant that really isn’t that amazing, but there’s something about it which deserves a little bit of praise and attention just because the people behind it have come up with something just a little extra. It’s when I find a place that does something that nobody else does that I get a real sense of pleasure. Even when there is room for improvement elsewhere, a restaurant should be hailed for at least offering something unique. So it is with the ridiculously-named StaQs.

My daughter seems to have been mostly absent from the pages of this blog lately; she missed out on her brother’s trip to Tennessee with me, but that’s not to say she’s been completely idle. She has been going through a difficult period, getting used to the awful social rules of middle school, and, sadly, acting like going well out of the way for something to eat is a monstrous burden upon her texting and iPod time. She is, after all, twelve. Well, last week, she and I had a little time after a doctor’s appointment for a quick snack, and even though I probably should not have spent any additional money that day, I realized that we’d be going by StaQs, which is on South Cobb Drive a couple of doors down from Vittles Restaurant.

This particular stretch of road has been pretty brutal to barbecue restaurants. I mentioned many months ago that the venerable Old South BBQ was just a stone’s throw from some others, intending then to come back and try StaQs, but it slipped down the wishlist. Just north of Windy Hill, you can see the building that once housed Champs, a pretty good place that was notorious for blaring Country Music Television at maximum volume in every room of their big facility. The restaurant has sat untouched, the old signage still there, for more than three years. Across the street was once another barbecue joint, the name of which escapes me, but they too kept their signage long after the business closed. Old South still seems to thrive and has seen off at least two challengers around this intersection, but economically, this isn’t the most upscale region of Cobb County. Rents are probably a little cheap here, suggesting that StaQs might have been right to start small in this building, which I believe was formerly a Waffle House.

Speaking of that, I did mention that something on the menu here was notable, even if, perhaps, the overall quality of the food is something that still needs a touch of work. StaQs offers a remarkable little dish called, appropriately, The Mess.

The Mess is, simply, a small serving of chopped pork and cole slaw atop a waffle with maple syrup. I don’t know who came up with such a thing, but they deserve a medal. 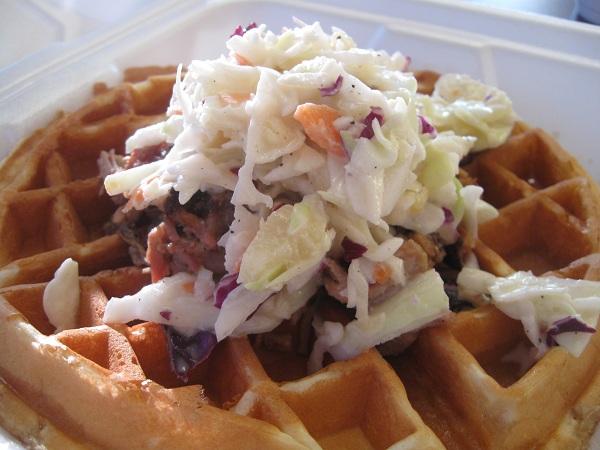 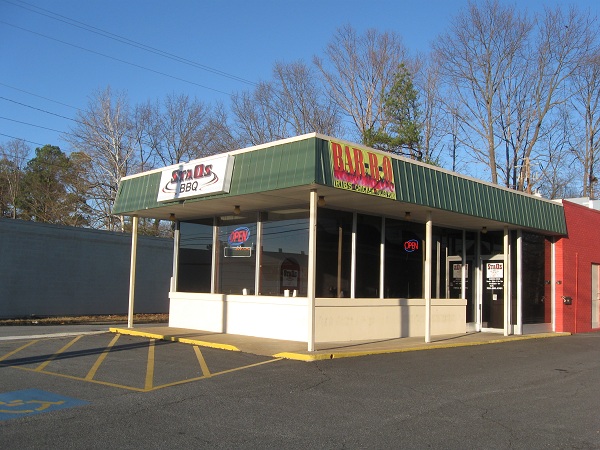 For people already in Smyrna, it’s certainly worth stopping in, but as for whether it’s worth a very long crosstown drive to try, I’d have to say probably not. I really didn’t enjoy the pork as much as I hoped, and neither sauce – a sweet and a hot, each tomato-based – were really that amazing. Nor was there enough pork to really sample much of the sauce, as the maple syrup had already made the meat very sweet. It’s a remarkably good idea, but I suggest the pork could use a lot more smoke flavor for this meal to be a real showstopper.

On the other hand, the stew here really is quite good, and worth a try. It’s made with chicken, corn and potatoes in the traditional tomato base, and you get a really big helping of it for your money. My daughter will often just order a bowl of stew when we go out, and this was considerably more than either of us were expecting, or that she could finish. She had the rest of it for lunch a few days later.

Speaking of lunch, thanks to this place, I’m now wondering what a plate of a drier, smokier meat might taste like with maple syrup. Maybe I should run up to Ellijay and get some of Oscar Poole’s pork and try some of that done this way. Hmmm.