This is Marie, contributing an uncharacteristically dessert-free chapter. One of the local places we don’t visit often enough because of our roaming tendencies is a pleasant little pizza joint with a brick oven. I usually forget the actual name of the place, in fact, but luckily Grant knows that when I suggest eating at the Brick Oven pizza place I mean this restaurant. However, given our tendency towards variety combined with the tendency of that area to have an infestation of mall traffic, we don’t eat there very often. That is a shame, because besides good regular food, every so often they have fried green beans as a special and I am rather fond of those. Actually, the last time we’d tried to go we had to pass because there was a line out the door and we were too hungry to wait that long for dinner.

There are a lot of pizza joints in the area, and that’s one of the reasons we tend to change out. There’s another Italian place I’m particularly fond of, in fact, but we go even less often because of budgetary constraints. They happen not to have fried green beans, but that’s irrelevant.

On this particular occasion we had a good excuse to go to a familiar place. My aunt Lori and her husband let us know that they would be coming down through Atlanta on their way to Florida and wanted to visit over dinner, and that was the first thing that came to mind that would be easy for an out-of-town guest driving down I-75 to find. Their visit was scheduled for a Thursday (traditionally my most stressful and longest day at work) so having something to look forward to for the evening was definitely a positive addition to my day. As good hosts, though, it was important to give them a place that would be easy to find and which I could get to independently if (as it almost turned out) I would need to drive there on my own because of the effects of Thursdays on my schedule. Then, as a surprise, after dinner we got to open a late wedding gift. I am always partial to late gifts as it is a good excuse to keep the original celebration going.

One of the peculiar aspects to this particular visit is that for the first time I visited the online reviews of the place. We’d just stopped by the first time and liked it, so we hadn’t ever checked what the internet was saying about the place. Now, when I looked at the web in order to send directions and maybe send a copy of the menu for them to look at, I saw a clutter of negative reviews scattered around several lists (in between quite a few much more positive ones). The puzzling thing about them is that these particular reviews didn’t seem to be about the same place we’d visited. All our experiences have been at the least tasty and at the best very good. 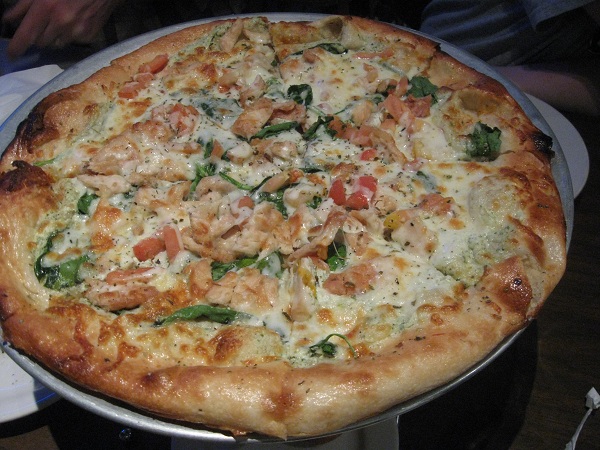 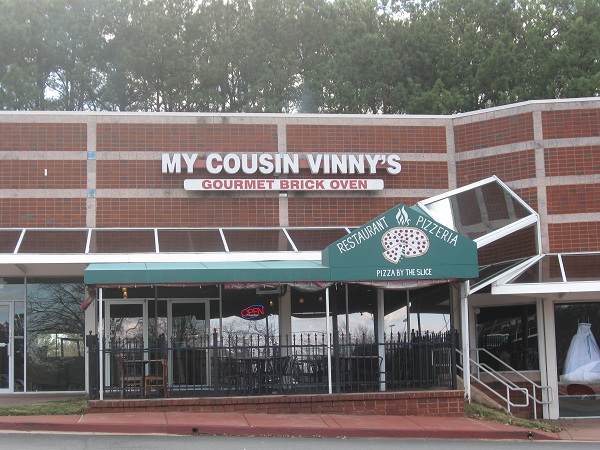 This particular evening went quite well. Most of the other business for the place that night was people stopping by for take-out so we had the dining room nearly to ourselves. I hope it’s not because of the reviews, but the server did say that they do a lot of their business on the weekend. The last time we’d tried to go we had to pass because there was a line out the door and we were too hungry to wait that long for dinner!

The food there is not overly complicated, just tasty. Sadly, the fried green beans were not available that day. Our order started with a huge plate of rolls covered in melted garlic butter, hot and rather addictive themselves. My uncle commented that he could eat just those for dinner and that got us another plateful so he almost did! Generally, if I can have only one topping on a pizza I’ll go for sausage but that’s not an option these days. After the baby I am going to have a salami sandwich followed by a sausage pizza, then when I get home I’ll probably make one of my family’s Dutch recipes that involve more sausage, even though that’s winter food down here in Georgia!

We had ordered two pizzas to share except for our daughter, who had to be different and get ravioli. She got a salad out of the deal, and although not a fan of green stuff ate most of it, only passing on the onions. Grant and I chose a pizza that was new to us for the evening, the chicken pesto with spinach and tomatoes. It’s a really good combination that I would definitely take again. So all in all, I would have to say that if they ever deserved those poor reviews they’ve definitely outgrown that phase.

After dinner we got to open a late wedding gift. I am always partial to late gifts as it is a good excuse to keep the original celebration going.

(Update 7/11/12: Sadly, we have learned that My Cousin Vinny’s shuttered in late June. We were speaking to Malika of Atlanta Restaurant Blog last night, and she remembered that when this place was on US-41 some years ago, it was always packed. We only ever saw it busy just one time after we discovered it in its Busbee Parkway home, and thought of it as just a quiet getaway. That, of course, probably isn’t what restaurants need to keep the lights on. Our best wishes to the owners and staff.)