This is Marie, contributing a small article about a local pizza joint we tried out. No one enjoyed the visit more than the baby did, because they have an arcade with a game that shows trucks jumping Monster-Truck-style over unlikely bits of terrain, and the game had a wheel and lever and buttons. He did not care in the least that all he got to see was the teaser footage; for him, it was an unending free video game.

We were enticed there by a coupon for unlimited toppings on a large pizza, which is a truly excellent deal. The coupon had not brought many visitors in that evening, which is a shame as their pizza was hot and tasty. I hope they have more success as time goes on. They seem to be doing well on other evenings. They have opened four stores in Cobb and Cherokee Counties over the course of about a year. One of four is in Kennesaw, in the former location of My Cousin Vinny’s, which we enjoyed. The one that we visited is the other direction on Piedmont, near Sprayberry High School. 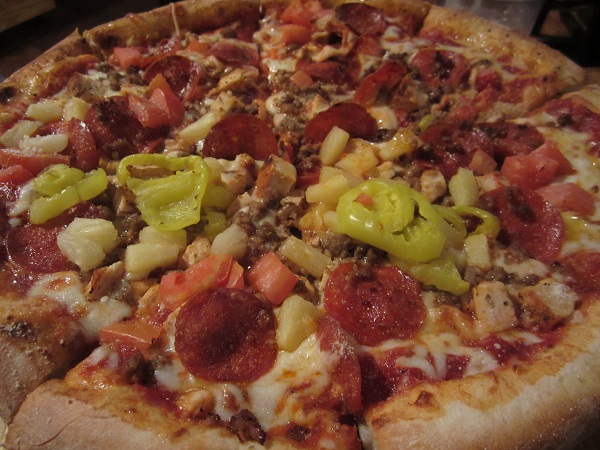 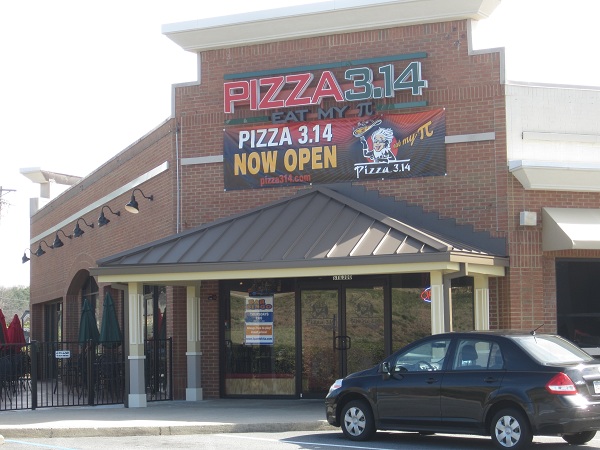 The story behind the name is a math joke, which pleases the cockles of my geekish heart. According to their site, “Much like Pizza 3.14, 3.14 (also known as “π” or pi” in mathematics) is irrational and transcendent.” While this place did not steal the honors from my favorite pizza place, since the rival is in Knoxville, it doesn’t need to worry overmuch about that particular competition. There are a lot of very good pizza joints in easy driving distance, of many different kinds, so it’s best to note that this is in the New York style tradition, with cheese that makes strings as you pull away a slice – in my mind, the best kind. They’ve also got a decent variety of other things such as wings, calzones, pasta dishes and so forth on the menu, but we just tried the pizza. It came out quickly, and was hot, tasty, and very garlicky. The crust was soft and chewy, just as I like it, and the toppings did not make the bottom crust unduly soggy, though they were numerous enough to require two hands on each slice.

We got olives, pepperoni, chicken, extra cheese, sausage, banana peppers, pineapple and (off-menu) diced tomatoes. The server was prompt and cheerful despite the emptiness of the place. When we first came in there were two toddler girls rampaging around the games area, which was a decided relief on my part, as I could with a clear conscience let the baby rampage along with them. He rather badly needed to get some wiggles out, so after slurping down his snack he ran around like a happy lunatic and flirted with the girls – until he saw the truck game, was sucked into the screen and held enthralled. If it hadn’t been past his bedtime I would have been seriously tempted to see what he’d have made of a single round’s worth of the actual game!