In early November, my daughter and I were driving along South Cobb Drive in Smyrna and were surprised to see that a new barbecue place had moved into the building that had once been the home of StaQs. It’s an old, 1960s-era Waffle House, and this stretch of road has not been all that kind to restaurants in the last five or six years. We decided to swing by the next time we were in the area. She had a doctor’s appointment nearby in early December. I figured, wrongly, that she would eat lunch at school and have a side with me once I collected her. No, I made the mistake of sharing plans and she skipped lunch at school, waiting until we got to the counter to order to hit me up with puppy-dog eyes and tell me how hungry she was, and how good those wings sounded. Dadblasted young’un.

Well, I can’t say as I blame her. I’d have probably pulled the same trick on my parents.

Mr. Boyd is originally from Memphis, and recently retired from the military after a long career, based in Virginia, of repairing and rebuilding airplane engines. He smokes exclusively over hickory in a very small outdoor smoker. Barbecue is the main attraction for the likes of our family, certainly, but they serve a number of other traditional American comfort foods, like spaghetti, meat loaf, and smothered chicken. 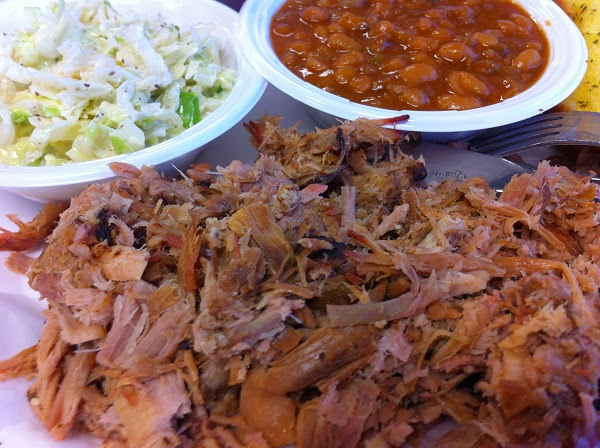 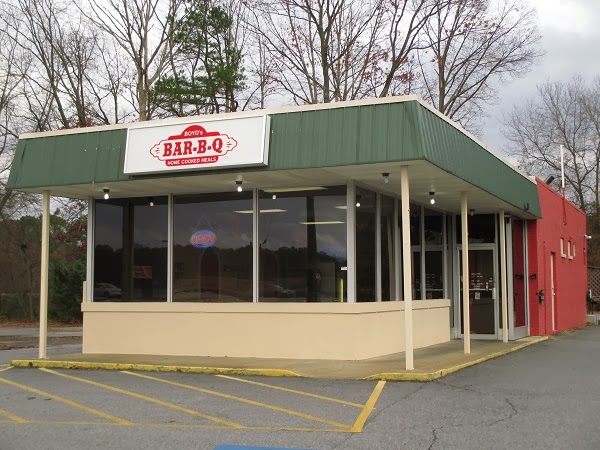 My daughter ordered the wings with mac-n-cheese and BBQ beans. I had a pork plate with the beans and some excellent slaw. It was a neat mix, with a little more vinegar than the usual mayo slaw you get around here. The beans were so good that all we each had to say was simply “Those are some beans,” before nodding with approval. The mac-n-cheese was the runaway winner. The girlchild gobbled that down between two blinks. Teenagers have no concept of taking things slow to savor them.

As for the meat, I was very impressed. This is another example of what I think of as classic Atlanta-style barbecue. It’s dry and chopped and very smoky, and calls out for a little more sauce than what comes in a tiny ounce cup. Understanding that money is tight in a place so new, I’d prefer they go ahead and keep the sauce on the table in squeeze bottles. It is a standard Memphis-style sweet and sticky sauce, and goes quite well with the meat.

I think that he’s set up in a really tough location. It’s not just StaQs that failed here, but the former homes of both Champs BBQ and Down East BBQ are less than a mile up the road. But his barbecue is very good, and we were very pleased to meet Mr. Boyd, who is effervescent, outgoing, and pleased to welcome new guests. I wouldn’t mind another visit at all.