Since I work downtown, the main objection to heading that way when there’s a big sporting event in the city – the price of parking – is not an issue. So while all the surface lots and some of the decks started raising their rates upward of $40 to rip off the fans of Auburn and Mizzou who had come to town to see the SEC Championship Game, Marie and the baby and I enjoyed the crowds and seeing everybody having a great time at no additional cost. But we also got a reminder that there’s no substitute for common sense when there’s a big event in any downtown district. When we returned to our employee lot, Marie and I caught a scam artist “selling” spaces in our lot for $20 a head before beating it. We made sure that none of his victims got towed, but it’s worth a minute to remind everybody reading this to only park in a legitimate space, and give your money to somebody who has a right to take it.

Anyway, so I had an idea for what I’d like to have for dessert, but we chose to let the toddler have some input into what we’d do for lunch after a busy morning playing at The Children’s Museum of Atlanta. He said “pizza,” and Max’s Coal Oven is just a short walk up the street. We hadn’t been to Max’s since we began the blog, but I remembered enjoying it when we last went, and I’d actually been recommending it as an option to downtown guests for many years now. It’s the only pizza place with a coal oven in Georgia, and it originally opened in 2009 as a Concentrics concept. That group sold the business to Legacy in 2010. It’s in the same strip of connected buildings on Marietta Street as two other Legacy restaurants, the sports bar Stats and Der Biergarten. For a short time, after Legacy bought the place, they hired Enrico Liberato to refresh their menu and kick the recipes into shape. Liberato had also worked at both Fritti and Antico, so while this place sneaks under most pizza fans’ radars, I would argue that any place with Liberato’s footprints is worth a look.

The line for Stats, by the way, was an hour deep when we arrived, and two hours when we left, while there was still a little bit of table space at Max’s. Somebody needs to take charge, in situations like this, of sticking their head out the door and telling everybody in line for the sports bar that they’ve got no wait for pizza. It’s not like Sportscenter wasn’t playing on a big-screen above the bar anyway. Speaking of Sportscenter, you know what’s the greatest? It’s the wonderful community booing whenever Lee Corso sticks on the mascot’s head. He picked Ohio State and the whole restaurant jeered. He could’ve picked anybody and the whole restaurant would’ve jeered. Isn’t it great? He’s the nearest thing we have to Howard Cosell. 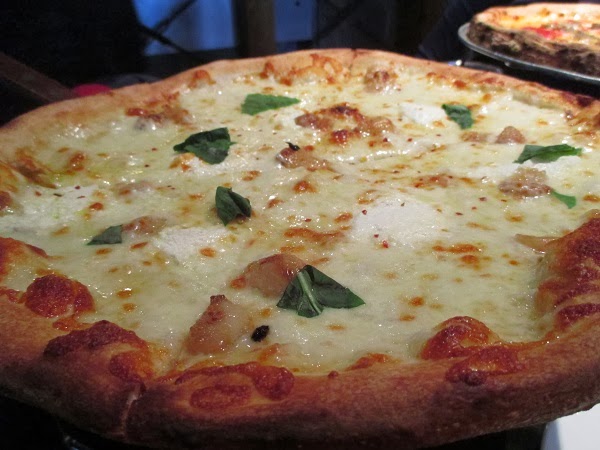 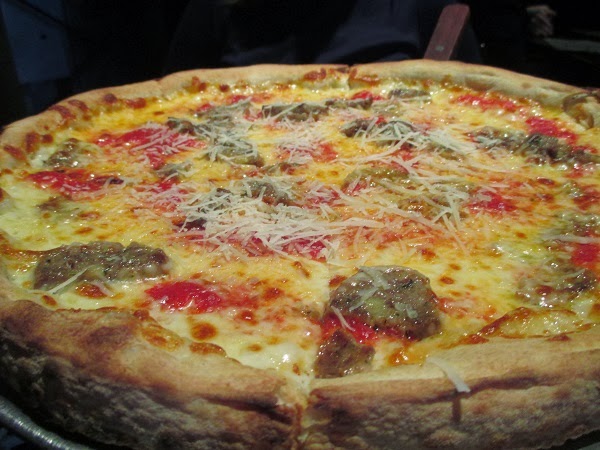 Max’s does 12-inch pies, so two adults with a toddler who can usually be expected to eat maybe most of one and a half slices should probably order two pies and plan to take a few slices home. I selected a Bianca, with three cheeses, confit garlic, chili flakes, and basil. Marie just had a meatball pie, with lots of extra parmesan. 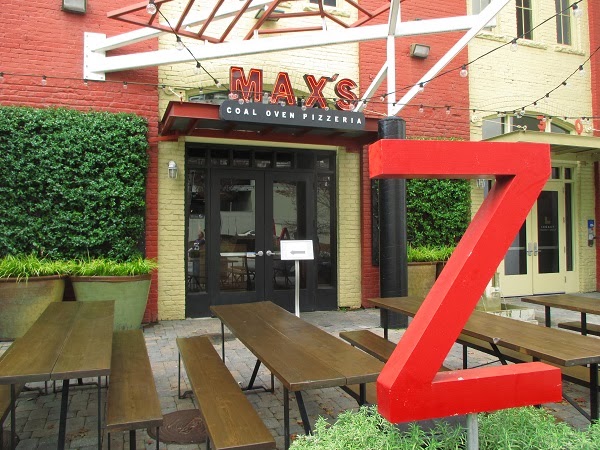 The charred, yet chewy, crust gets most of the attention at Max’s, because of the celebrated coal oven, but while it’s really good and tasty, I think the amazing sauce is the selling point. The Bianca was pretty good, but I’m afraid that it simply had too much cheese for the flavor that I wanted to shine through it; the sauce was buried. Marie’s pie was much better. The balance was just right, and you can enjoy the sauce a lot more when it isn’t struggling to be tasted under all that cheese and garlic. So we left satisfied, and very pleased with the excellent service. I was glad that a place I’d been recommending to downtown visitors and guests for so long – this place and Googie Burger, also a short walk away – has maintained its quality. It’s honestly not a top five pizza joint, to be clear, but I could certainly hear an argument for it sneaking into an Atlanta top ten.

Other blog posts about Max’s: